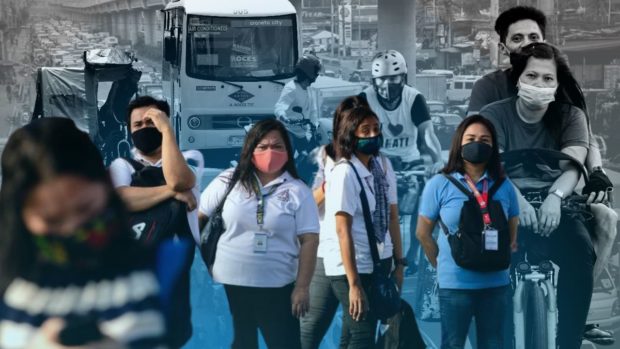 MANILA, Philippines—Amid the holiday season, Metro Manila is decked with light displays—not only in malls and public places, but also on the region’s major roads as the Christmas rush is causing  “carmageddon” once again, unveiling thousands of vehicles barely moving.

Road congestion had been projected to spike by 10 percent, according to the Metropolitan Manila Development Authority (MMDA), as the public prepares for Christmas and joins the rush to do holiday shopping.

MMDA spokesperson Melissa Carunungan also reported that an estimated 417,000 vehicles pass through Edsa every day as of November 24—and this was expected to increase in the following weeks due to the holiday rush.

While traffic jams and choked roads are considered a common sight, the holiday season exacerbates existing transport woes with the transportation system in the metropolis already “broken” or “bad” to begin with.

Earlier this month, journalist Atom Araullo aired his sentiment regarding “what a broken transportation system looks like,” based on his experiences in his travels through the Ninoy Aquino International Airport (Naia), the Philippines’ main gateway.

“Just arrived at the airport from an overseas trip. No coupon taxis, no metered taxis, no Grab,” Araullo said in a tweet last December 9.

“Wala rin tayong mga bus at tren dito. Basically kung wala kang sundo, you’re dead. (There’s no bus or train here either. Basically, if you don’t have someone to pick you up, you’re dead).  It’s been an hour and counting. This is what a broken transpo system looks like,” he added.

Just arrived at the airport from an overseas trip. No coupon taxis, no metered taxis, no Grab. Wala rin tayong mga bus at tren dito. Basically kung wala kang sundo, you’re dead. It’s been an hour and counting. This is what a broken transpo system looks like 💀

His tweet went viral and drew similar opinions and stories from some commuters who have had similar experiences and shared the same transportation woes.

In a separate tweet last December 13, Araullo said it’s fair for the public to yearn for decent public transportation.

He, however, noted that what he experienced might not be the daily scenario at the airport. Still, he stressed that the “broken transportation system” is a problem that requires immediate attention.

“Still, this is a now problem, requiring immediate attention. And yes, it’s a challenge not just for the airport, but the entire country too. A good public transportation system is pro-people, and essential for development. Pointing that out does not make you unpatriotic,” he wrote.

Metro transport among the worst

The 2022 edition of the Urban Mobility Readiness Index by the Oliver Wyman Forum and the University of California, Berkeley, found that public transportation and urban mobility readiness in the Philippine capital are among the worst in the world. 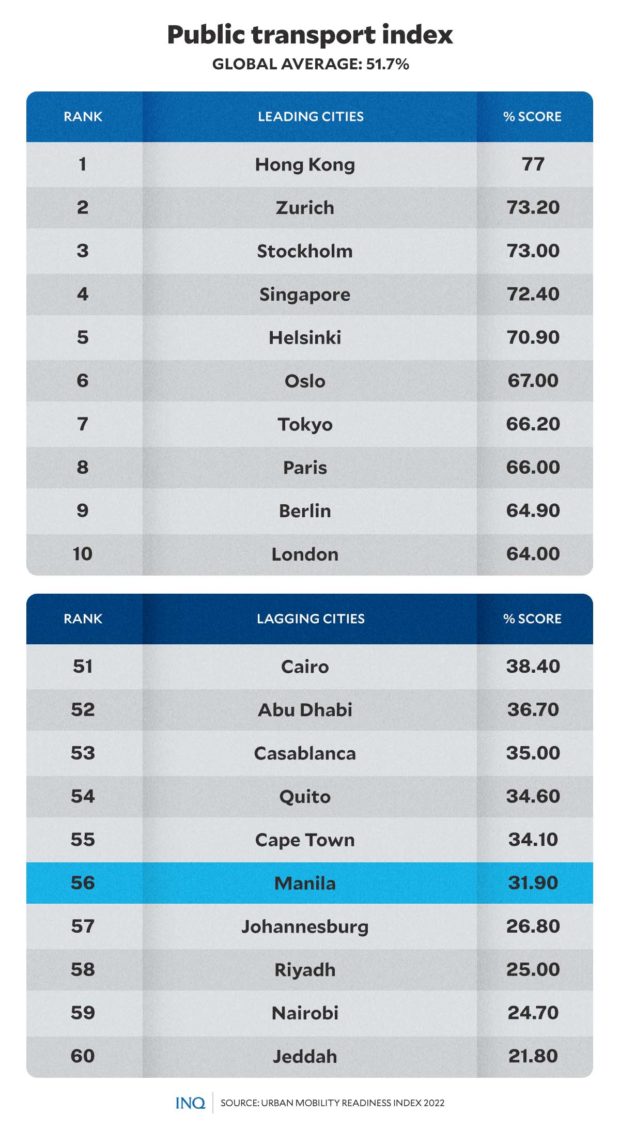 Out of 60 global cities worldwide, Manila ranked 58th in terms of Urban Mobility Readiness (UMR) or how prepared they are for future mobility disruptors, with a UMR score of 31.2 percent.

The City of Manila also lagged behind the Sustainable Mobility sub-index list, which measures the cities’ efforts to build greener and more sustainable mobility ecosystems. The country’s capital ranked 48th out of 60 cities, with a score of 36.6 percent.

Public transit, the report stated, “is the most efficient and sustainable way for cities to transport large groups of people compared to private means of transit, and an efficiently run system can not only encourage workers and tourists to travel through cities but can provide more equal opportunity access to additional mobility modes, jobs, shopping centers, and more” 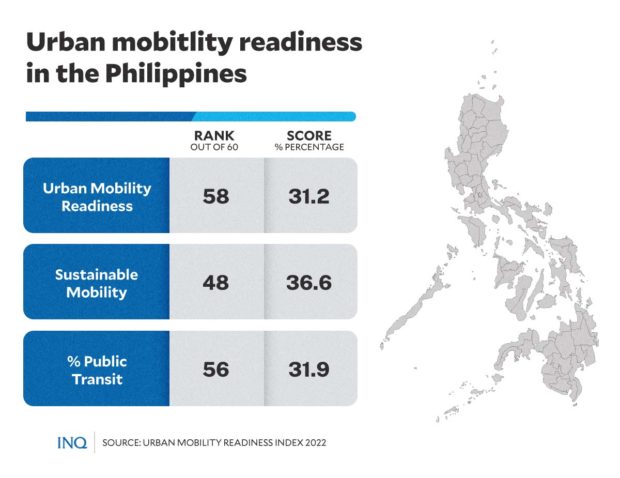 However, Manila has the worst performance on public transit density, efficiency, and utilization rate. It ranked 56th in the Public Transit sub-index, with a score of 31.9 percent, despite having several modes of available public transportation, such as jeepneys and metro lines. 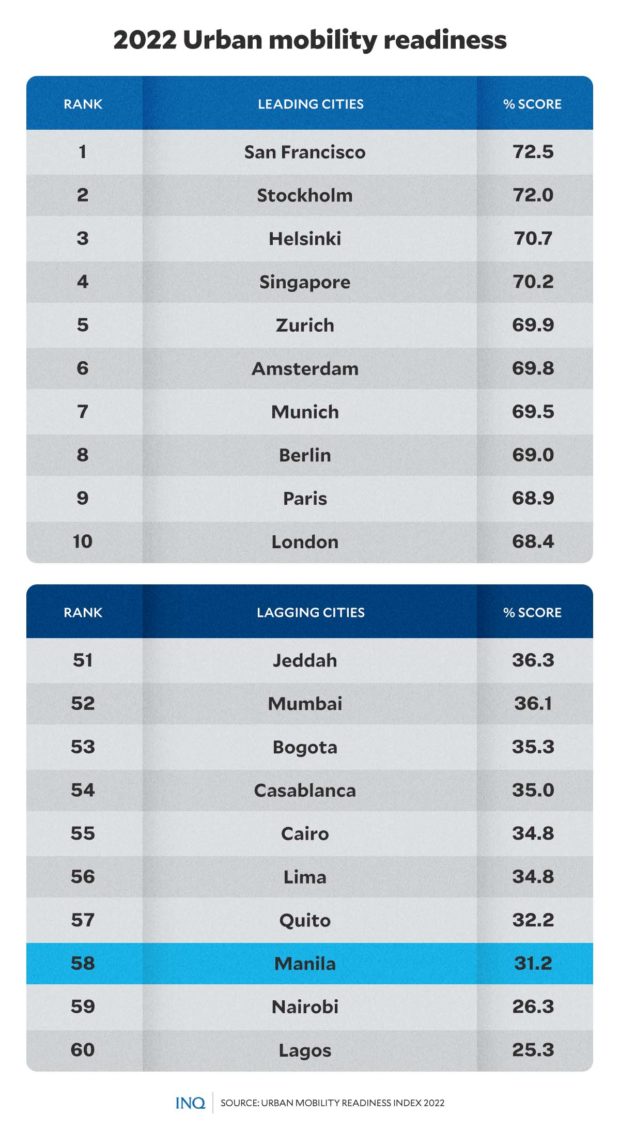 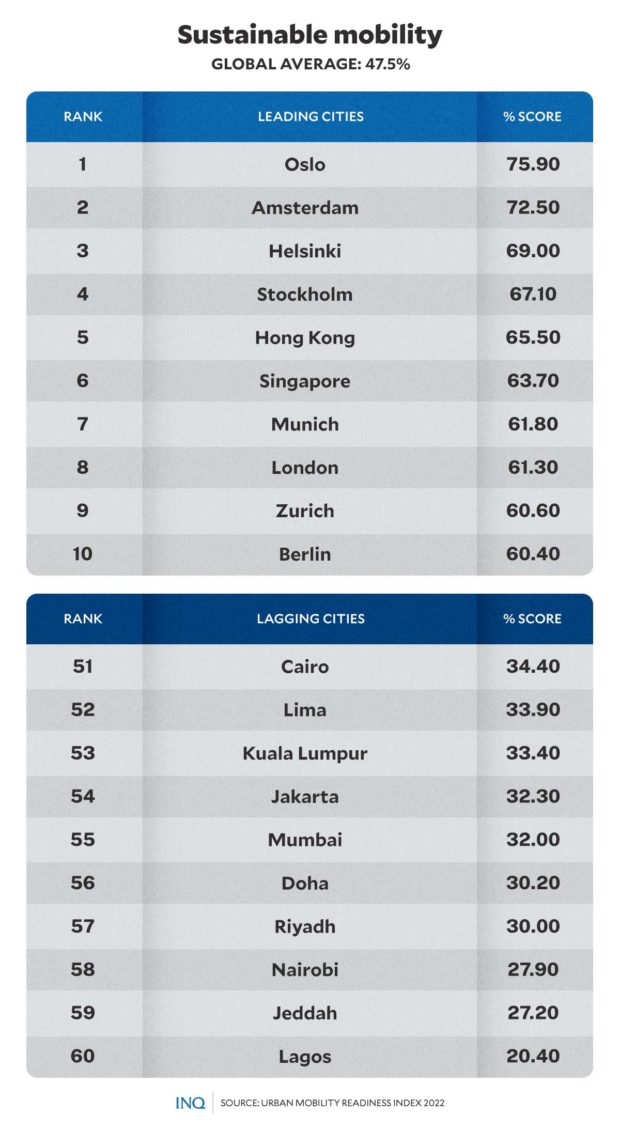 “Road transport faces challenges including the poor quality of roads in the metropolitan area and the limited regional connectivity provided by the national road network,” it added.

“Manila is congested and polluted, but a low level of car ownership should help prevent these problems from worsening.”

Even prior to the pandemic, there has been a “massive shortage” of public transportation in Metro Manila, according to a study by a transport and mobility advocacy group in the country. 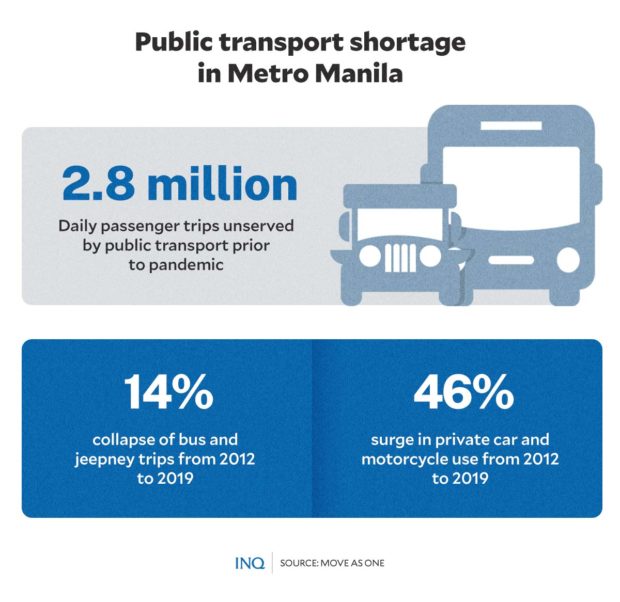 In a policy paper released last month titled “Fighting Transport Inflation: A Ten-Point Agenda,” Move As One Coalition stressed that there were at least 2.8 million daily passenger trips in Metro Manila not served by public transportation before the pandemic.

Citing MMDA data, the advocacy group noted that the number of bus and jeepney trips “collapsed by 14 percent” from 2012 to 2019, while private car and motorcycle trips surged by 46 percent leading to worse traffic congestion.

“Despite the steady growth in our urban populations, there has been hardly any increase in the supply of public transportation (buses, jeepneys, and UV Express) in Philippine cities over the past decade. The oil crisis has only worsened this shortage of public utility vehicles — and the suffering of countless commuters competing for scarce public utility vehicles,” the group said.

With the recent round of fuel price hikes, the group also noted that more motorists affected by rising prices of fuel had joined the ranks of commuters in Metro Manila amid public transportation shortage.

Included in the 10-point agenda raised by the group to address the current transportation system woes include “increasing the capacity of public utility vehicles (PUV) to move people” through PUV-only lanes or PUV-only hours.

“Widening lanes for cars incentivizes cars to fill up the new space or lanes allocated to them, in well-documented phenomena in urban planning called induced demand, generated traffic, or induced travel,” it added.