Events in the life of Myanmar’s Aung San Suu Kyi 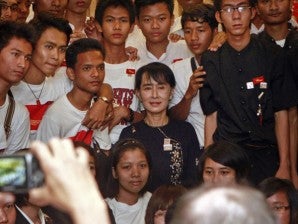 Myanmar's democracy leader Aung San Suu Kyi, center, poses for photo together with youth members of her National League for Democracy party during a ceremony to mark Human Rights Day and 24th anniversary of a 1988 students group movement, Tuesday, March 13, 2012, in Yangon, Myanmar. Internet users in Myanmar got a sneak preview Tuesday of opposition leader Aung San Suu Kyi's first-ever campaign speech for state television. A video posted on several sites, including Facebook and YouTube, shows the Nobel laureate proclaiming her National League for Democracy's party platform ahead of April 1 by-elections. Her party is contesting 47 of the 48 parliamentary seats at stake after having one candidate disqualified. (AP Photo/Khin Maung Win)

The opposition party of Myanmar pro-democracy leader Aung San Suu Kyi has announced that she won a parliamentary seat in Sunday’s by-elections. The victory, if confirmed in official results, marks a milestone in a nation that where the military has ruled almost exclusively for a half-century.

Here are some key events in the life of Suu Kyi, who became the face of Myanmar’s struggle for democracy while locked under house arrest for two decades:

— June 19, 1945: Born in Yangon, then called Rangoon. She is the daughter of national hero Gen. Aung San and Daw Khin Kyi, also a prominent public figure.

— July 1947: Aung San and six members of his interim government are assassinated by rivals. Suu Kyi is 2.

— 1960: After finishing high school, Suu Kyi leaves for further study in New Delhi, where her mother is Burma’s ambassador. She later moves to England to study at Oxford University.

— April 1988: Suu Kyi returns home to attend to her ailing mother just as pro-democracy protests erupt against the military junta. Her mother dies later that year.

— June 1989: The government renames the country Myanmar and the capital Yangon.

— July 1989: Suu Kyi, an increasingly outspoken critic of the junta, and her deputy, Tin Oo, are put under house arrest.

— May 1990: The junta calls general elections. Suu Kyi’s party wins a landslide victory, but the military refuses to hand over power.

— October 1991: Suu Kyi is awarded the Nobel Peace Prize for her peaceful struggle against the regime.

— July 1995: Suu Kyi is released from house arrest but remains in Myanmar, fearing she will never be let back into the country if she leaves.

— March 1999: Aris, who has not seen his wife since 1995 because the junta repeatedly denied him a visa, dies of cancer in England.

— September 2000: Suu Kyi is placed under house arrest after attempting to leave Yangon for a political meeting.

— May 2003: Suu Kyi is put back under house arrest. She is taken into “protective custody” after her motorcade is ambushed by a government-backed mob.

— August 2007: Protests start over fuel price increases, then swell into the largest pro-democracy demonstrations since 1988. The movement was dubbed the “Saffron Revolution” because it was led by saffron-robed Buddhist monks.

— Aug. 11, 2009: Suu Kyi’s detention is extended by 18 months when a court convicts her of violating her house arrest by briefly sheltering an American intruder who swam to her house uninvited.

— April 1, 2012: By-elections to fill 45 seats in the 664-seat parliament. Suu Kyi’s party says she wins a seat, in what would mark her first elected office after two decades as a symbolic opposition leader.