Activists pass the hat, seek reduced bail for Nasino, 2 others 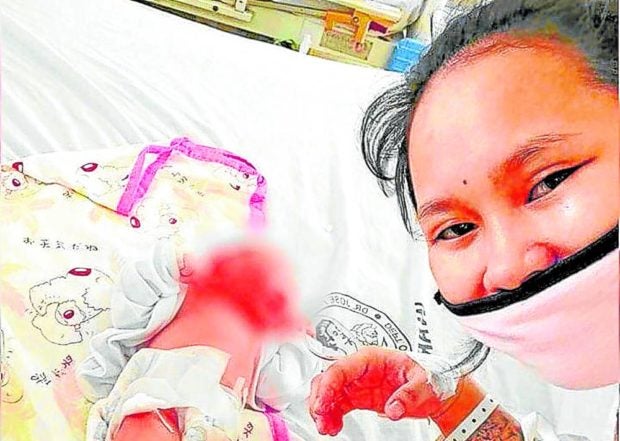 HOME FOR CHRISTMAS? Activists are raising funds to bail out three detained rights workers, including Reina Mae Nasino, pictured above with Baby River, whom she lost in detention in 2020. The target is to get Nasino, Alma Moran and Ram Carlo Bautista released before the holidays, the groups say. (CONTRIBUTED PHOTO)

MANILA, Philippines — Activists launched a fundraising drive to help bail out three detained colleagues, including Reina Mae Nasino, who lost her 3-month-old baby while in detention in 2020, even as lawyers moved to have the bond for their provisional liberty cut in half.

The groups led by Bagong Alyansang Makabayan (Bayan) and Karapatan started seeking donations on Wednesday in hopes of collecting a total of P1.41 million to get Nasino, Alma Moran, and Ram Carlo Bautista released from the Manila City Jail.

“Our target is to get them home before Christmas,” said Renato Reyes, Bayan secretary general.

Lawyers for the three activists also asked the Manila judge who granted their bail petition to consider halving the bail amounts, noting that it might be impossible for their families to raise the money.

Their motion cited the “strong ties to the community” of the three activists, their lack of criminal history, and the court’s own Dec. 12 order stating that the evidence presented so far by the prosecution was “not strong.”

“In setting the bail amount, all circumstances have to be considered,” Nasino’s lawyer Kathy Panguban told the Inquirer.

The joint motion noted that the three were full-time human rights workers who were “earning only what was necessary for their daily sustenance” and were relying on their “low-income, working class families” for support.

“Given their situation, it is really impossible for them to raise that kind of amount,” the lawyer said.

Nasino and her two companions were arrested in Manila’s Tondo district in November 2019 on the strength of so-called “roving warrants” for illegal possession of firearms and explosives.

The Court of Appeals, on Aug. 31, voided the search warrants that resulted in their arrest upon finding that these “failed to meet the standards of a valid search warrant, and all evidence procured by virtue thereof are deemed inadmissible.”

On Monday, Judge Paulino Gallegos of the Manila Regional Trial Court Branch 47 set bail for Nasino and Moran at P420,000 each and for Bautista at P570,000.

The amounts were based on the “Bail Bond Guide” issued by the National Prosecution Service in 2018, which states that bail for violations of certain special laws, including illegal possession of firearms or explosives, should be computed based on the number of years of the maximum penalty multiplied by P10,000.

Panguban said she realized that the court was only following the guide, but argued that the economic situation of the three should be taken into account.

“Reina Mae, Ram and Alma are innocent, and yet they are being made to go through so many legal wringers to get out of jail,” Karapatan secretary general Cristina Palabay said in a statement.

According to Reyes, solicitation letters are being circulated online by the Metro Manila chapters of activist groups led by Kapatid and Karapatan, with help from Anakbayan, League of Filipino Students, Kabataan party list, National Union of Students of the Philippines, Bayan and Gabriela.

“Reina Mae has endured so much, from being jailed on trumped-up charges, losing her baby while in detention, and now, having to raise nearly half a million pesos for her bail,” Reyes lamented.

Nasino gave birth to her daughter known as “Baby River” in jail on July 1, 2020, but the infant fell ill and died on Oct. 9 after she was separated from her mother.

Nasino, then 23, had petitioned the court to allow her to be with her child but her appeals were denied, sparking a public outcry.

“In the interest of justice, we urge the court to reduce the Tondo 3’s bail considerably and allow them to spend Christmas with their families,” Palabay said, referring to the three by their new moniker among activists.

“Add to this the fact that Reina Mae, Ram, and Alma come from working-class backgrounds and can ill afford the excessive bail being demanded by the court,” she said.

Nasino, 2 others to remain in detention a while longer