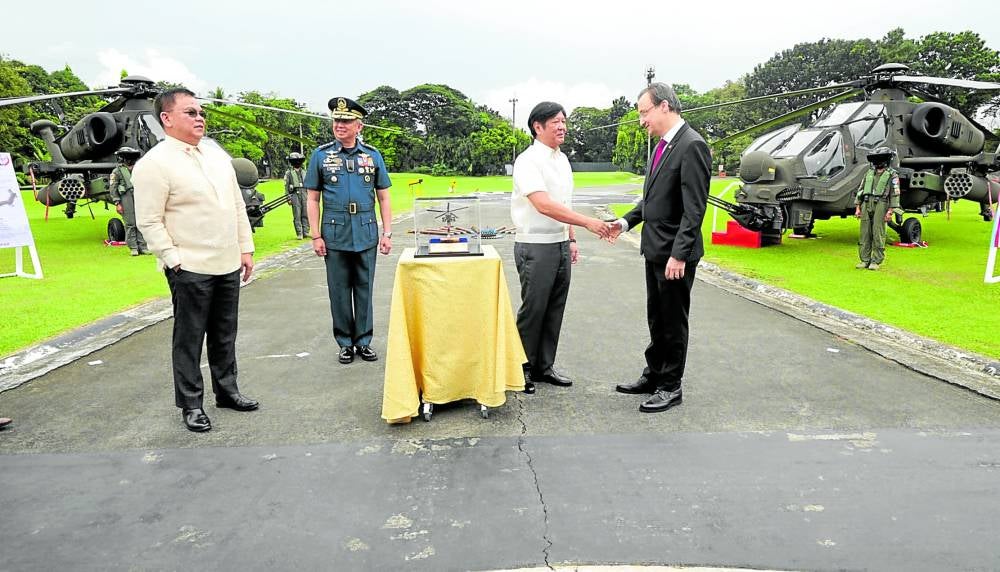 BEEFING UP PAF President Marcos attends the blessing of two T129 Atak helicopters acquired by the Philippine Air Force (PAF), in rites held on the Presidential Security Group compound at Malacañang Park, Manila, on Friday. The choppers make up the second batch coming from Turkish Aerospace Industries, where the PAF ordered a total of six units during the Duterte administration. The first two helicopters arrived in the country in March. —MALACAÑANG PHOTO

The Philippine Air Force (PAF) got a boost in its modernization program with the addition of two Turkish-made “ATAK” helicopters procured by the Philippine government from Turkiye.

“The President expressed hope that the modernization goal and PAF’s recent advancement will drive it to enhance its defense capabilities consistently, perform its duties effectively and protect the nation with vigor and pride,” Undersecretary Cheloy Velicaria Garafil, officer in charge of the Office of the Press Secretary (OPS), said in a statement.

According to Garafil, the President hopes that the new state of the art helicopters will improve the Philippine Air Force’s operational readiness and responsiveness to air and territorial threats.

During the ceremony, Garafil said Mr. Marcos thanked the Turkish government for its “invaluable contribution to the nation’s external defense, internal security operations, as well as disaster relief and response operations.”

The OPS said that in March this year, the PAF received the two T-129 along with unspecified logistics support equipment under a $269 million government-to-government contract with Turkiye that was signed in July 2020.

The OPS said T-129 helicopters are manufactured by Turkish Aerospace Industries and are based on the AgustaWestland A129 Mangusta design.

It added that the new assets would complement a pair of refurbished Bell AH-1S Huey Cobra attack helicopters from Jordan together with the observation and transport helicopters in the PAF’s inventory.

In July this year, the President promised a more modern and robust Air Force, saying that the ongoing defense modernization effort was essential for the country’s security.

T-129 is a twin-engine, tandem seat, multi-role, all-weather attack helicopter. The existing T-129s of the PAF are being operated by its 15th Strike Wing unit for territorial defense, aerial surveillance and reconnaissance, counter-insurgency combat operations and combat support operations.

According to the PAF, the capabilities of T-129 are very far and different from the old procured helicopters.

T-129 has a 20-millimeter, three-barreled gun on the nose, a sensor system and an all-weather platform. It is designed for advanced attack and reconnaissance missions in hot and high environments and rough geography in both day and night conditions.