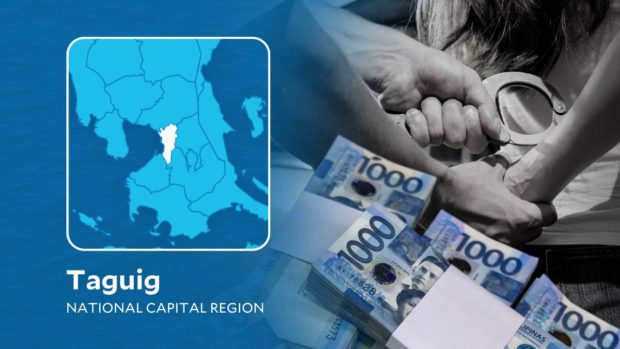 MANILA, Philippines — A 40-year-old woman has been arrested in Taguig for allegedly using fake money to pay for her taxi fare.

In a report, the National Capital Region Police Office (NCRPO) identified the suspect as Elizabeth De Roxas, who was arrested at Bgry. Fort Bonifacio Taguig City on December 7.

According to the police, the suspect rode a taxi from Pasay City to Gate 3 of Fort Bonifacio where she paid a fake P1,000 bill to the driver upon arriving at the destination.

The driver reportedly discovered the money was fake but the suspect insisted for her change of P850, to which the driver refused.

The suspect then went to a nearby convenience store to ask for smaller bills for her money but was also declined.

“She tried to pay back the money to the driver leading to an argument. Complainant [taxi driver] sought assistance from Taguig City Police Substation 1 leading to the discovery of the counterfeit money and arrest of the suspect,” police said.

The suspect is currently detained at the Taguig City Police Station while complaints for use of counterfeit money are being prepared against her.

(We remind the public to scrutinize the money they receive so they will not be victimized by fake money. Let’s check the security features of true money, like the security threat and watermark. Especially now that it’s Christmas time, there will be an increase of fake money and those who want to use them.)