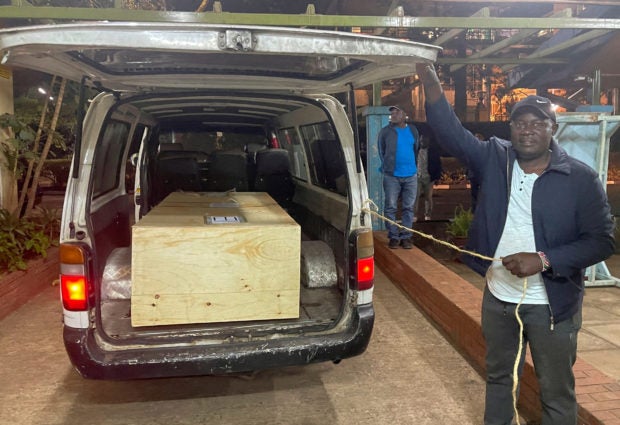 FILE PHOTO: The wooden coffin containing the body of Pakistani journalist Arshad Sharif, who was shot dead when police hunting car thieves opened fire on the vehicle he was traveling in as it drove through their roadblock without stopping, is loaded into a courtesy van at the Chiromo mortuary in Nairobi, Kenya, October 24, 2022. REUTERS/Thomas Mukoya

ISLAMABAD — A team set up by the Pakistani government to probe the killing of a well-known Pakistani journalist in Nairobi said it found several contradictions in the version given by Kenyan authorities, and believes it was a case of pre-meditated murder.

TV journalist Arshad Sharif, who had fled Pakistan citing threats to his life, was shot dead in Nairobi in October. Kenyan officials said it was a case of mistaken identity and police hunting car thieves opened fire on his vehicle as it drove through a roadblock without stopping.

A two-member fact-finding team from Pakistan that travelled to Kenya and conducted a number of interviews, examined and reconstructed the crime scene and examined the deceased’s phones and computers, said in a 600-page report that Sharif’s killing was a pre-planned murder.

“Both the members of the (fact-finding team) have a considered understanding that it is a case of planned targeted assassination with transnational characters rather than a case of mistaken identity,” said the report, copies of which were submitted to Pakistan’s Supreme Court.

“It is more probable that the firing was done, after taking proper aim, at a stationary vehicle,” it said.

Kenyan authorities declined comment on the specifics of the report.

“The investigation into the matter is still ongoing, so there is not much I can tell,” said Resila Onyango, spokesperson for the Kenya National Police Service.

A multi-agency team is conducting the investigation, he said, adding that the team will apprise authorities when they are done with the probe.

Pakistan’s Interior Minister Rana Sanaullah had said before the release of the report that Sharif’s body had bruises and torture marks, suggested it was a targeted killing.

The fact-finding team highlighted one wound in particular on Sharif’s back, saying it appeared to have been inflicted from relatively close range.

The report noted there was no corresponding penetration mark of a bullet on the seat on which Sharif was sitting when the shooting purportedly took place, calling it a “ballistic impossibility”.

“The injury had to have been caused either before the journalist got into the vehicle, or the shot was fired from a relatively close range, possibly from inside the vehicle, and almost certainly not a moving vehicle,” the report said.

Sharif had fled from Pakistan citing threats to his life after the government registered several treason cases against him.

One of the treason cases stemmed from reporting Sharif did that led to an accusation he had spread a call from an official in a previous government, led by former cricket star Imran Khan, for members of the armed forces to mutiny.

Both Sharif and the official in the previous government denied inciting mutiny.

Former prime minister Khan said Sharif had been murdered for his journalistic work. He and his successor Prime Minister Shehbaz Sharif, not related to the journalist, had called for a judicial investigation.

The fact-finding team’s report also pointed out apparent contradictions in the autopsy reports in Kenya and Pakistan.

The fact-finding team report said doctors believed the injures may be the result of torture or a struggle, but it could not be established until verified by the doctor who conducted the post mortem in Kenya.