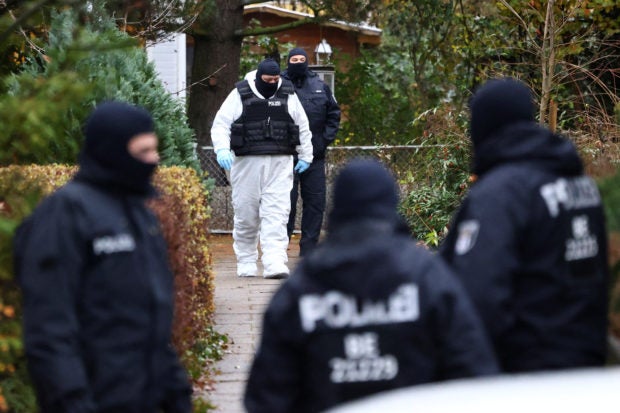 Police secures the area after 25 suspected members and supporters of a far-right group were detained during raids across Germany, in Berlin, Germany December 7, 2022. (REUTERS)

BERLIN  – Germany on Wednesday detained 25 members and supporters of a far-right group that the prosecutor’s office said was preparing a violent overthrow of the state to install as national leader a prince who had sought backing from Russia.

Prosecutors said the group was inspired by the deep state conspiracy theories of Germany’s Reichsbuerger and QAnon, whose advocates were among those arrested after the storming of the U.S. Capitol in January 2021.

Members of the Reichsbuerger (Citizens of the Reich) do not recognise modern-day Germany as a legitimate state. Some of them are devoted to the German empire under monarchy, while some are adherents of Nazi ideas and others believe Germany is under military occupation.

The plot envisaged a former member of a German royal family, identified as Heinrich XIII P. R. under Germany’s privacy law, as leader in a future state while another suspect, Ruediger v. P., would be the head of the military arm, with the aim of building a new German army, prosecutors said.

The group had emulated the structure of the government, creating a “council” that had regularly met since November 2021 as an administration-in-waiting with different departments, such as foreign affairs and health, prosecutors said.

They said Heinrich, who uses the title prince and comes from the royal House of Reuss, which had ruled over parts of eastern Germany, had reached out to representatives of Russia, whom the group saw as its central contact for establishing its new order. It said there was no evidence the representatives had reacted positively to the request.

Neither the House of Reuss nor Prince Reuss’ office responded to requests for comment.

An Interior Ministry spokesperson said security agencies were looking closely at any possible contact with Russia.

The Kremlin said there could be no question of any Russian involvement in an alleged far-right plot to overthrow the German state, with spokesman Dmitry Peskov saying that it “appears to be a German internal problem”.

The German government will respond with the full force of the law, Interior Minister Nancy Faeser said.

“The investigations provide a glimpse into the abyss of a terrorist threat from the Reichsbuerger milieu,” Faeser said in a statement, adding that the constitutional state knew how to defend itself against “the enemies of democracy”.

Faeser said she would present a bill in the next few days that would make it easier to remove civil service employees who were deemed to be enemies of the constitution.

The head of Germany’s domestic intelligence agency said the Reichsbuerger movement had grown considerably in the last year and presented a persistently high level of danger.

One active soldier and several reservists were also among those being investigated, a spokesperson for the military intelligence service told Reuters. The soldier is a member of the Bundeswehr’s KSK elite force, which has been overhauled in recent years due to a number of far-right incidents.

The group had been procuring equipment, trying to recruit new members and holding shooting lessons, prosecutors added. The focus of the recruitment efforts were primarily members of the military and police officers, they said.

A former parliamentary lawmaker from the far-right Alternative For Germany (AfD) was also among those detained, according to German prosecutors.

In a statement, the AfD condemned the far-right group’s efforts and expressed confidence in the authorities’ ability to bring clarity to the situation quickly and completely.

Investigators suspect individual members of the group had concrete plans to storm the Bundestag lower house of parliament in Berlin with a small armed group, prosecutors said.

The vice president of the Bundestag, Wolfgang Kubicki, told the Rheinische Post newspaper the building was equipped for attacks and they were aware of potential threat situations, so “the group’s plans were already doomed to fail when they were forged”.

But the revelations of the plot evoke memories of the storming of the steps of Germany’s Reichstag parliament building by protesters in August 2020 during mass marches against coronavirus curbs, as well as the attack on the U.S. Capitol.

Germany’s domestic intelligence agency attributes some 21,000 people to the Reichsbuerger (Citizens of the Reich) movement, with around 5% of them seen as far-right extremists.

The House of Reuss had previously distanced itself from Heinrich, calling him a confused man who pursued conspiracy theories, according to local media.

Germany’s monarchy was abolished a century ago. When the Weimar Constitution entered into force on Aug. 14, 1919, the legal privileges and titles of German nobility were removed. Officially, there are no princes and princesses in Germany.

Prosecutors said the raids were conducted by more than 3,000 police officials and security forces across 11 German federal states. Suspects were also arrested in Austria and Italy, the office said.

Eight are already in pre-trial detention, with the suspects due to appear before a judge on Wednesday and Thursday to determine the next judicial steps.

Italian police said they had arrested a 64-year-old former German army officer in the city of Perugia in connection with the case and procedures to extradite him had begun.

However, the police declined to comment on a report by Italy’s ANSA news agency that the suspect, who had acted as a recruiter, was a prominent figure in anti-lockdown demonstrations in Germany during the coronavirus pandemic.