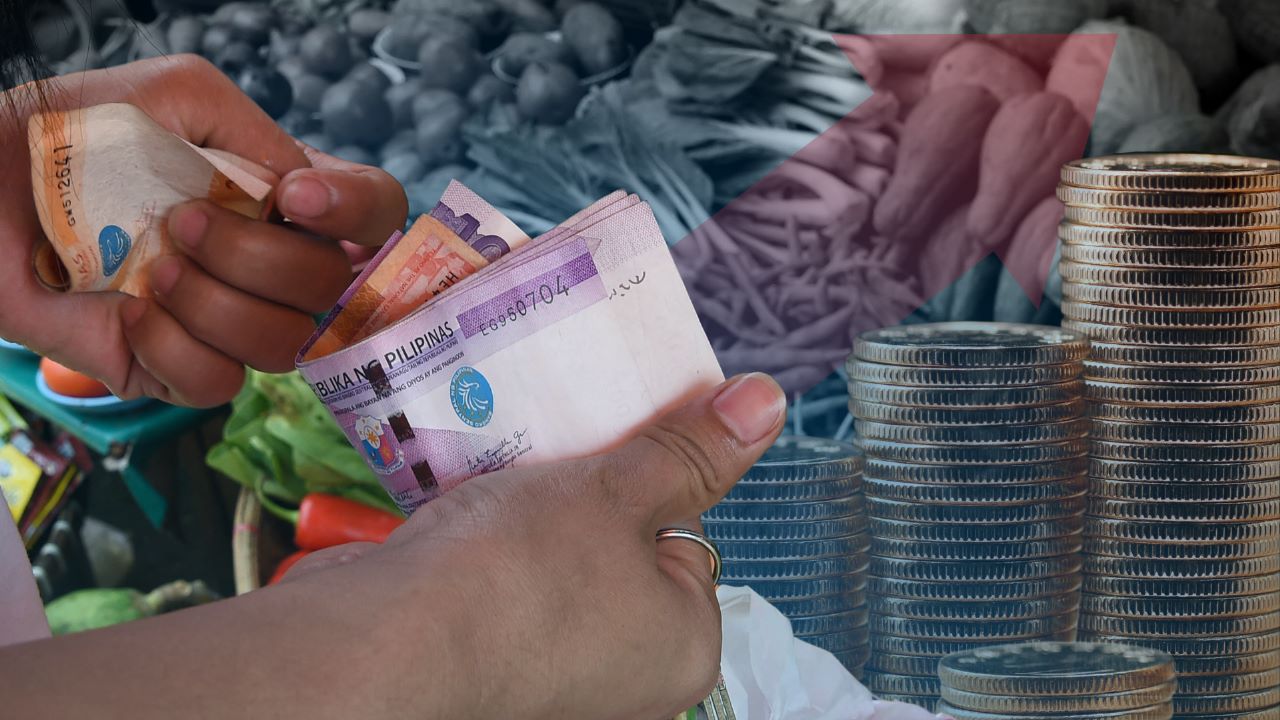 MANILA, Philippines—Inflation accelerated to a 14-year high of 8 percent last month, but the minimum wage set by the government, which is not even half of the living wage that a family of five needs to live decently, is not keeping up with rising consumer costs.

This was stressed by think tank Ibon Foundation on Tuesday (Dec. 6) as the Philippine Statistics Authority (PSA) said the readout accelerated from 7.7 percent in October 2022 and 3.7 percent in November 2021.

The latest readout, which is the highest since November 2008, is “pushing up the cost of living,” Ibon Foundation said. “This makes substantial wage increase[s], ample cash assistance and subsidies for the poor and vulnerable sectors all the more urgent.”

Based on the think tank’s computations, a family of five now needs an average of P830 to P1,904 a day to live decently, but the minimum wage set by the government ranges only from P341 to P570.

Take the case of Davao Region, where inflation was highest last month at 9.7 percent. Ibon Foundation said a family of five needs P1,095 a day, but the minimum wage received by workers in the region is only P427.

Likewise, inflation accelerated in Western Visayas and Central Luzon at 9.6 percent and 8.8 percent, respectively, in November, but workers in those regions are only receiving a minimum wage of P450, which is well below the living wage of P957 and P1,087.

Even in the Bangsamoro Autonomous Region in Muslim Mindanao (BARMM), where the readout was lowest at 6 percent, the minimum wage is way lower than the wage that a family of five should receive to live decently—P341 against P1,904.

“Inflation pushes the family living wage higher in all regions while minimum wages remain lacking—even the highest P570 in Metro Manila. This and the rampant low-paying informal jobs should be top concern as legislative sessions draw to a close.” 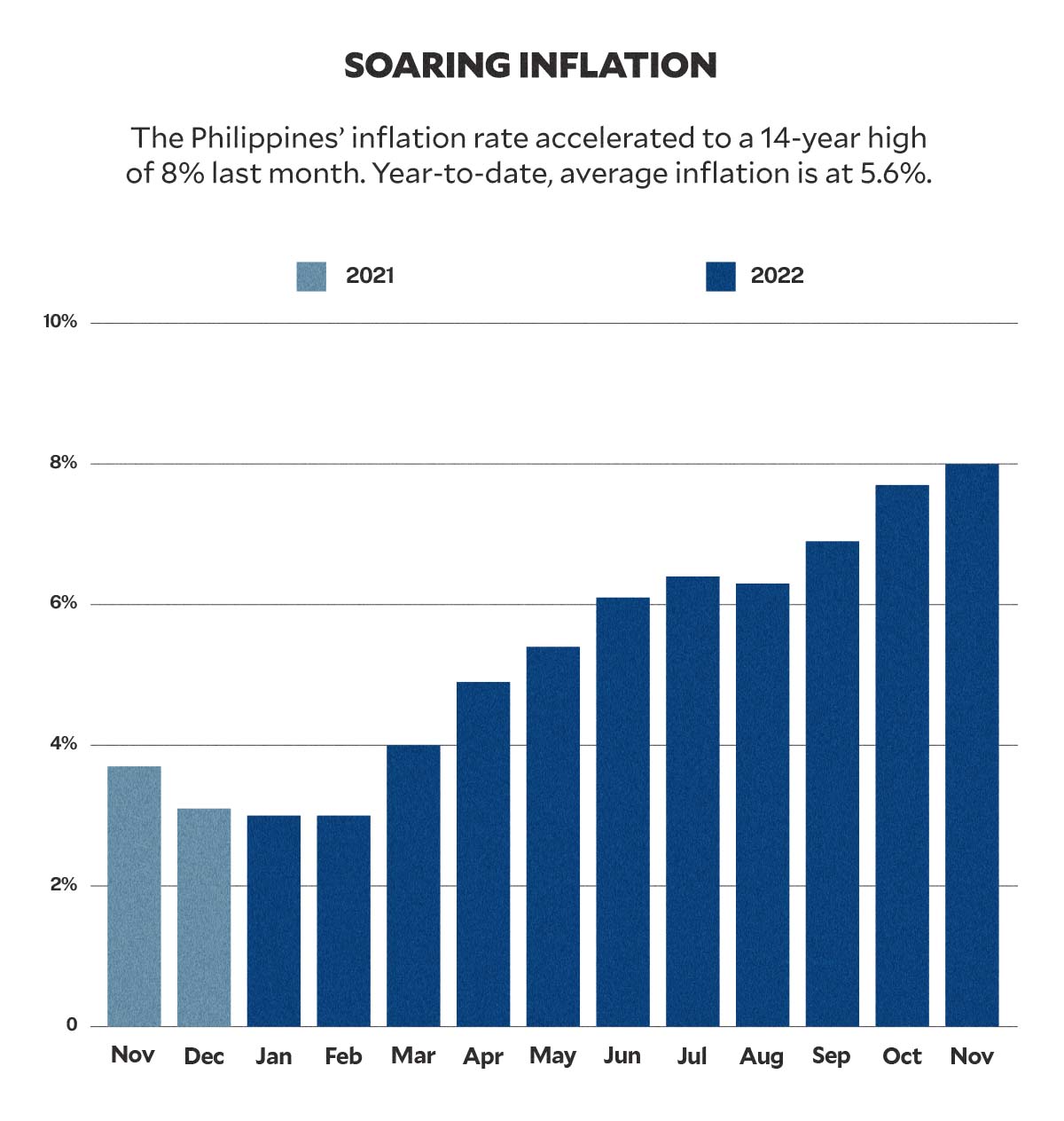 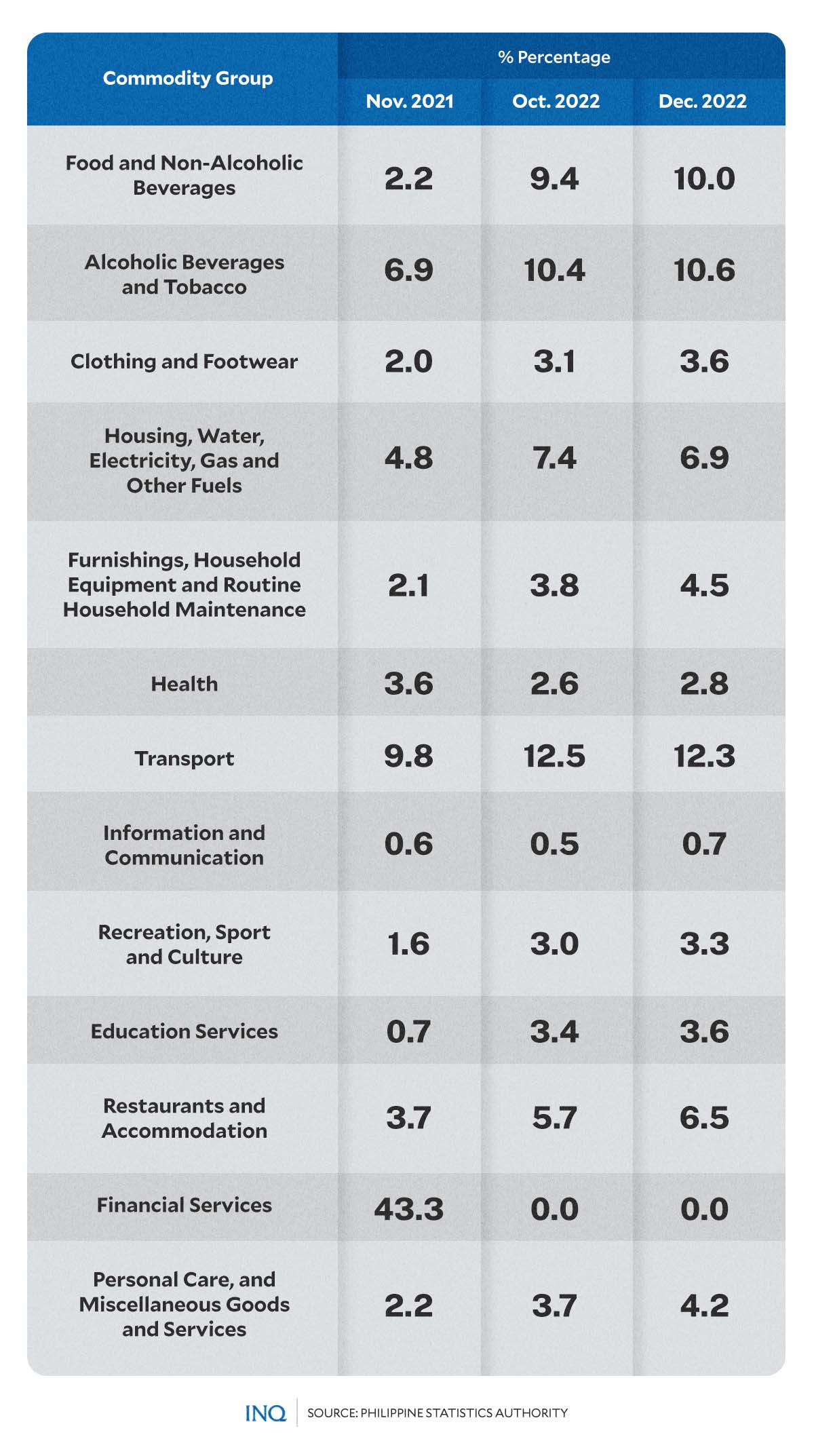 The same is true in the rest of the regions in the Visayas, where a family of five in Central Visayas and Eastern Visayas needs P1,208 and P830, but minimum pay remains to be limited at P435 and P350.

David Spencer, a professor of economics and political economy at the University of Leeds, said “rising inflation continues to be a major concern around the world with wage inflation unable to keep up.”

He said in a column for the World Economic Forum that “while a minority of workers’ wages have remained on a par with or risen above the level of inflation, most are seeing their purchasing power weaken.”

Spencer stressed that for most workers, “higher price inflation is now eroding the real value of what they earn.”

The PSA said inflation in Metro Manila eased at 7.5 percent last month from 7.7 percent in October 2022, but the readout is still way higher than 2.2 percent inflation rate in November 2021.

The slowdown of inflation in the region was primarily brought about by the slower annual increase in housing, water, electricity, gas and other fuels index at 7.7 percent from 4.4 percent, the PSA said.

But higher year-on-year mark-ups were observed in the indices of clothing and footwear (2.6 percent); furnishings, household equipment and routine household maintenance (4.3 percent); health (1.2 percent); and information and communication (0.2 percent).

Likewise, inflation in recreation, sports and culture was recorded at 3 percent, while mark-up in restaurants and accommodation services and personal care, and miscellaneous goods and services was at 8.8 percent and 2.7 percent.

RELATED STORY: Inflation may have already peaked in Nov

However, despite the downtrend in Metro Manila, the PSA said inflation in Areas Outside of the National Capital Region (AONCR) followed the trend at the national level as the readout accelerated to 8 percent from 7.6 percent. 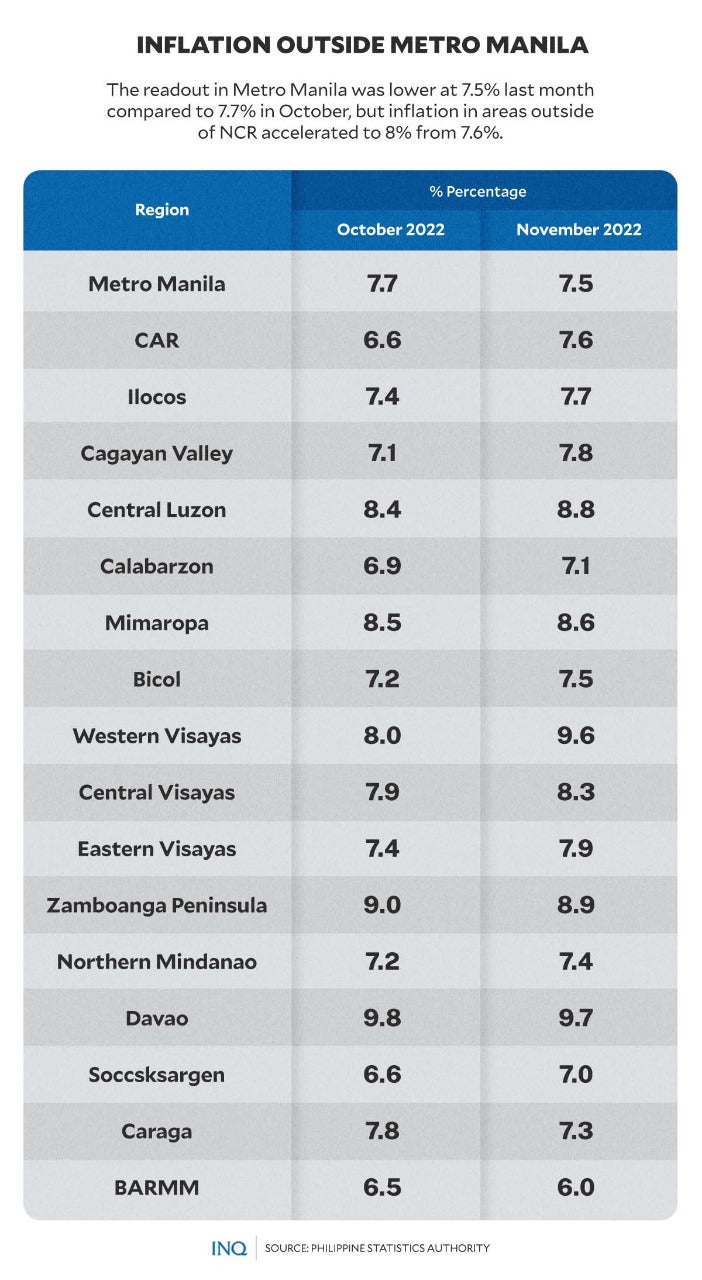 The increasing inflation in AONCR, the PSA said, was mainly influenced by the higher year-on-year change in the food and non-alcoholic beverages index at 9.7 percent from 9 percent.

The restaurants and accommodation services index, which recorded 5.6 percent annual increment, also contributed to the uptrend. Higher annual mark-ups were also observed in the indices of these commodity groups:

Meanwhile, the housing, water, electricity, gas and other fuels index recorded a lower year-on-year growth at 8 percent. The indices of transport and financial services retained their respective October 2022 inflation rates.

As stated by the PSA, compared with their respective annual rates in October 2022, 12 regions in AONCR had higher readouts, while only 4 regions—Zamboanga Peninsula, Davao Region, Caraga Region, and BARMM—had lower inflation rates.

The PSA said the acceleration of inflation last month was mainly because of the higher year-on-year growth rate in the index of food and non-alcoholic beverages at 10 percent from 9.4 percent.

The higher annual increment in the index of restaurants and accommodation services at 6.5 percent from 5.7 percent also contributed to the uptrend last month, with the PSA stressing that these indices likewise recorded higher annual increases: 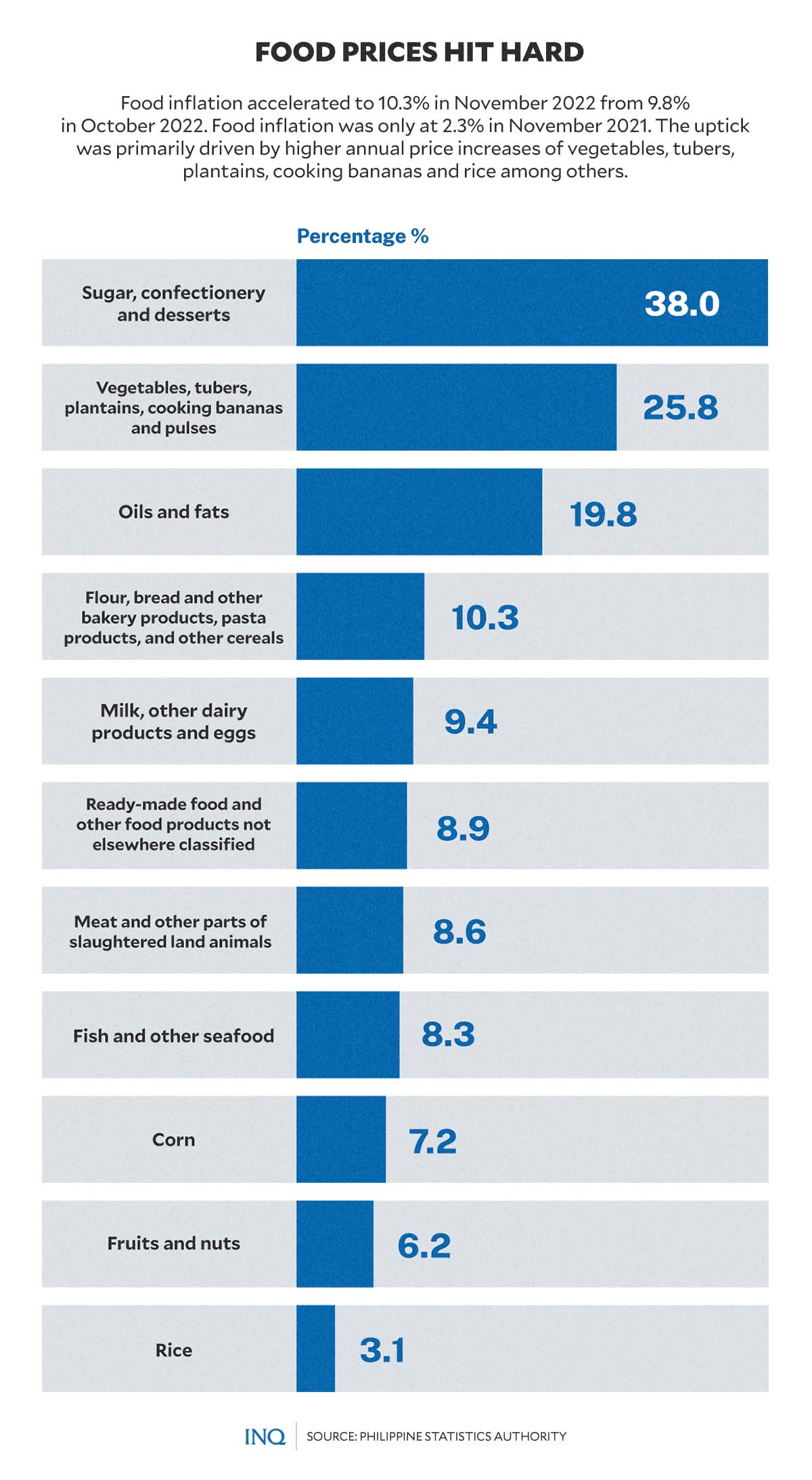 Slower year-on-year increases were observed in the indices of housing, water, electricity, gas and other fuels at 6.9 percent; and transport at 12.3 percent, the PSA said.

Year-to-date, average inflation is at 5.6 percent.

The PSA likewise stressed that food inflation at the national level accelerated to 10.3 percent last month from 9.8 percent in October 2022 and 2.3 percent in November last year. 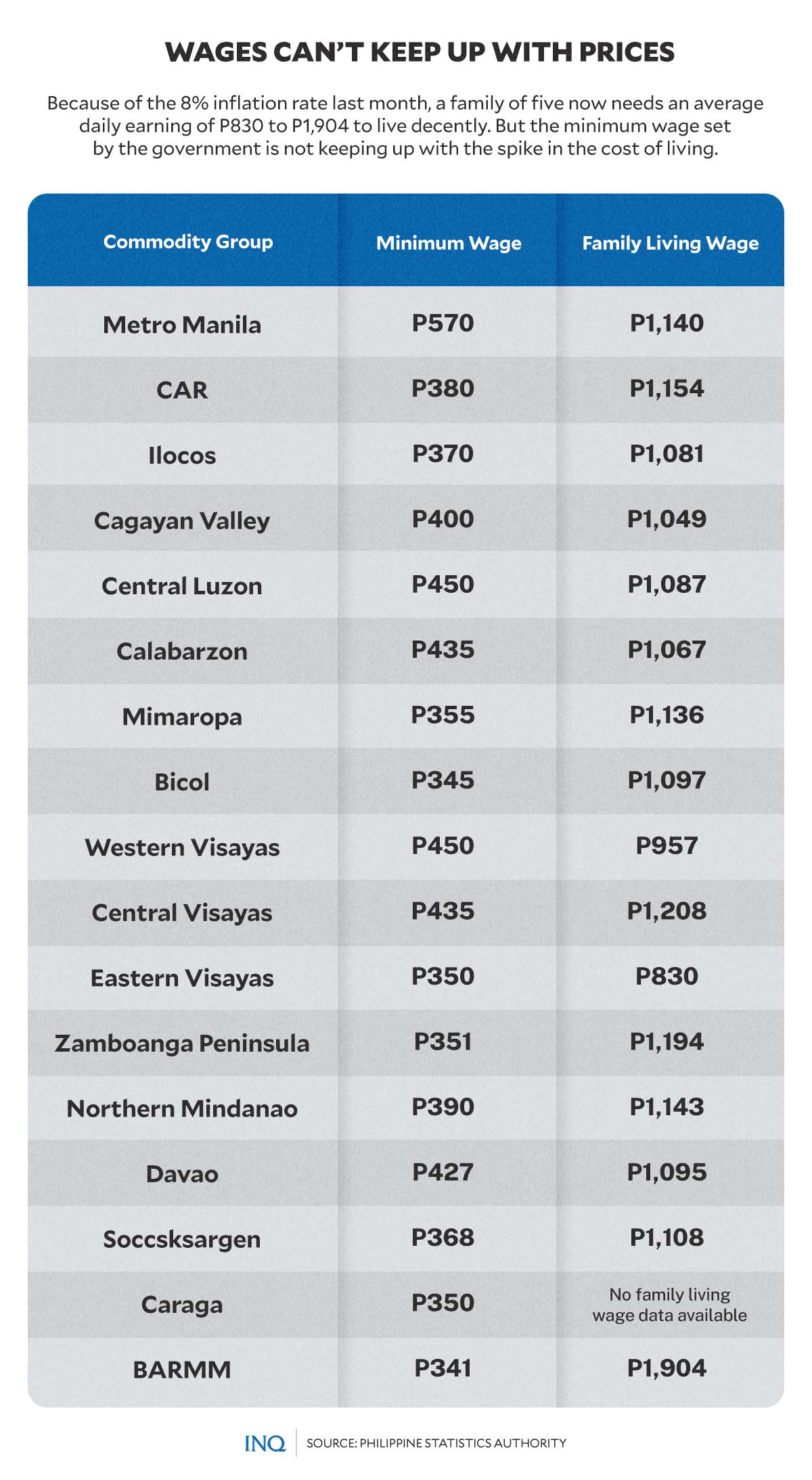 The uptick in food inflation was primarily influenced by higher annual growths in the  vegetables, tubers, plantains, cooking bananas and pulses index at 25.8 percent; and rice index at 3.1 percent.

Amid the inflation, labor groups Kapatiran ng mga Unyon at Samahang Manggagawa and Partido Manggagawa filed separate petitions at the NCR Wage Board to ask for a P100-increase in the minimum wage.

They said wages can no longer keep up with rising consumer prices, so minimum wage must be adjusted to help Filipinos cope with inflation.

RELATED STORY: Left with nothing: Survey numbers show hunger worse among those sinking deeper in poverty