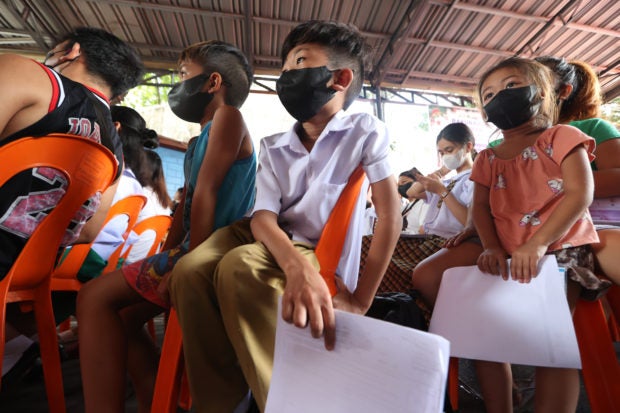 JABBED FINALLY Children and youths line up for vaccination at Pinagtipunan Circle in Potrero, Malabon City, on Tuesday—Day 2 of the Department of Health’s “Bakunahang Bayan” inoculation campaign which ends today. Unvaccinated adults may also avail themselves of this opportunity. —NIÑO JESUS ORBETA

The Department of Health (DOH) wants to get about three in five kids vaccinated with primary COVID-19 doses by the end of its three-day “Bakunahang Bayan” that started on Monday to strengthen their immunity, especially since they will have Christmas gatherings and year-end school activities.

DOH officer in charge Maria Rosario Vergeire said the current vaccination coverage among 5-11 years old is only around 49 percent, which means that an accomplishment rate of 11 percent must be achieved within this month’s special vaccination days.

In Metro Manila alone, more than half a million or 529,561 kids have yet to get their first two injections.

Teens age 12-17 are eligible for first booster shots but 158,519 of them in the capital region have yet to avail themselves of the additional doses.

Nationwide, fully vaccinated children age 5-11 were at 5.33 million out of the target 10.8 million kids as of Nov. 30. Booster doses are not yet allowed for this age group.

The Bakunahang Bayan focused for the first time on expanding pediatric vaccination, although other segments of the population may still get their doses at vaccination sites during the three-day activity.

Vergeire cited continued hesitancy among parents due to misinformation about vaccine efficacy for the low inoculation rates.

“We’re still intensifying efforts on [disseminating information] to parents that vaccines are safe, effective and would be able to protect [against COVID-19],” said the health official in a press briefing on Tuesday.

“Please do not listen to mere hearsay and information that are not grounded on science,” she added.

In a separate press conference, Director Gloria Balboa of the Metro Manila Center for Health Development urged parents to have their kids jabbed as the “risk is high” this month because of the expected Christmas parties.

In a Dec. 2 order, the Department of Education allowed Christmas parties in public schools.

“It’s important now, especially among the youth who are considered a vulnerable group, [that they get vaccinated] because they are doing face-to-face classes,” said Balboa.

She stressed that having all students in a classroom vaccinated means that everyone has the same level of protection against the virus.

Meanwhile, the DOH will have to “ask permission” from vaccine manufacturers with whom it had signed vaccine deals, should the agency be subpoenaed to release contract details, including the actual prices of the COVID-19 jabs. 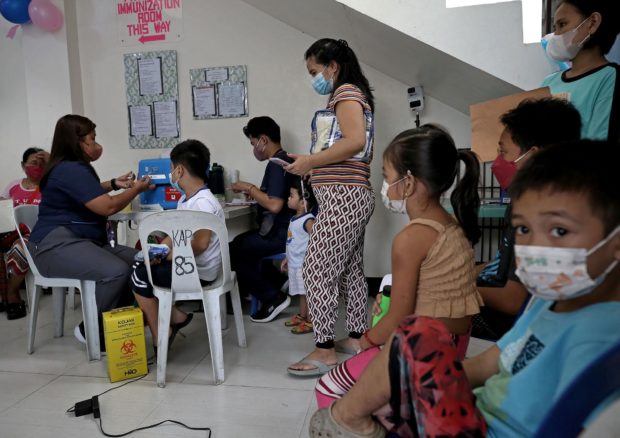 READY FOR THAT SHOT Children at the Parola Health Center in Tondo, Manila are inoculated on the second day of the “Bakunahang Bayan” vaccination campaign. —RICHARD A. REYES

But it is also covered by the “exemptions” stating that the information could be shared if required by law or an investigation, she noted.

She noted that vaccine cost was one of the highly confidential provisions of the contracts due to stiff “competition” and “market forces.”

In a message to the Inquirer, former Health Secretary Francisco Duque III said prices of the vaccines under the agreements should be covered in the audit.

Duque has refuted Commission on Audit (COA) chief Gamaliel Cordoba’s claim last week that he had withheld documents on vaccine procurement deals because of the NDAs.

He said it was during his watch when the DOH, in a letter signed by then Undersecretary Mario Villaverde, asked the COA to start an audit of the three loan programs worth nearly $2 billion extended separately by the World Bank and Asian Development Bank. INQ