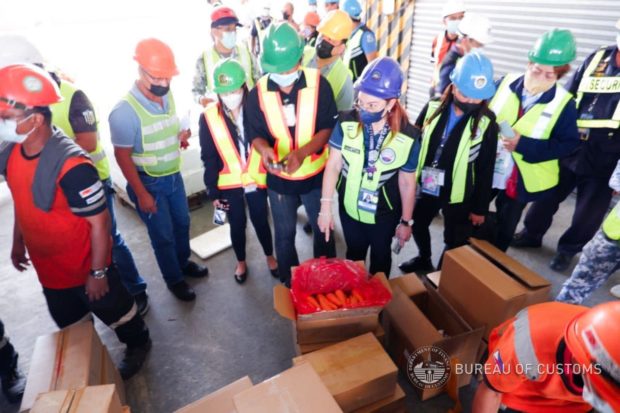 Officials from the Bureau of Customs, Department of Agriculture, Subic Bay Metropolitan Authority and other agencies on Tuesday (Dec. 6) inspect a shipment containing smuggled agricultural products from China. (Photo courtesy of BOC Subic)

In a statement, the Bureau of Customs (BOC) in the Port of Subic said District Collector Maritess Martin issued an alert order on Dec. 1, against the shipments of Veneta Consumer Goods Trading and Lalavy Aggregates Trading.

During an examination on Tuesday, smuggled frozen carrots were discovered after these were declared as assorted food items consigned to Veneta Consumer Goods Trading.

Another shipment consigned to Lalavy Aggregates Trading that was declared as frozen lobster balls and crabsticks were found to contain fresh red and white onions.

The BOC said it would issue warrants of seizure and detention against the shipments after completing the examination and inventory. INQ