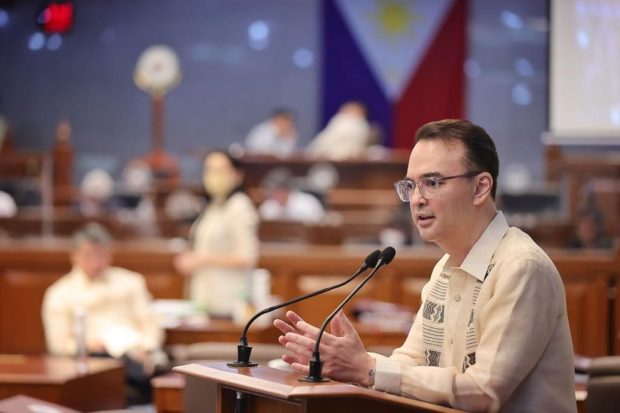 MANILA, Philippines — In an effort to introduce the shift from a simple national budget to a long-term plan for the country, Senator Alan Peter Cayetano has suggested that the Senate craft a scorecard that would monitor the progress of government programs and projects over the course of five years instead of just one.

This after the Bicameral Conference Committee successfully passed the 2023 national budget on Monday morning, which was presented by Finance Committee Chairperson Senator Sonny Angara in the plenary session.

“I’d like to congratulate the House and Senate panel, and the Executive Department for all the hard work put in the budget considering it is a transition year,” Cayetano said.

Noting that the first year of an administration is ”always difficult,” the senator urged his colleagues in the government to ensure that the implementation lives up to the promise of the national budget.

Cayetano said he also wants to link the budget with the programs, projects, and activities of the government and with the Commission on Appointments (CA), with ad-interim Cabinet Secretaries being asked to present their goals for the next five years.

To accomplish this, Cayetano said the Senate majority should come together with the minority and all independents to ensure that the long-term vision of the current administration is reflected in the proposed scorecard.

This, he added, will help the administration monitor its achievements and properly pace itself.

The independent senator also expressed his willingness to work with the administration in crafting and implementing the five-year plan.

“Sana nakatulong kaming i-align ang budget sa mga priorities na sinabi ng Pangulo sa kanyang SONA. And I’m hoping that we can be part of putting it as a five-year package [I hope we helped in aligning the budget to the priorities of the President as what he mentioned in the State of the Nation Address],” Cayetano said, referring to the President’s first State of the Nation Address delivered last July.

Angara, for his part, agreed with the idea and praised the long-term perspective of Cayetano, noting that this comes from his long experience as Speaker of the House of Representatives and as Secretary of Foreign Affairs.

“I think the administration would probably have — if it hasn‘t already finished — y’ung medium term development plan at doon nakapaloob y’ung karamihan ng mga [achievement] target. But if we feel that any is lacking in detail, I think we can ask the officials to make it more coherent or specific so that we can determine kung na-meet nga y‘ung goals na ’yun,” Angara added.

Cayetano again commended the hard work put into the budget by the senators and the members of the House of Representatives who comprised the bicameral committee.

“A very sincere congratulations on the hard work. I’m hoping that this will be a very good start. The success of this administration is the success of the Filipino people,” he said