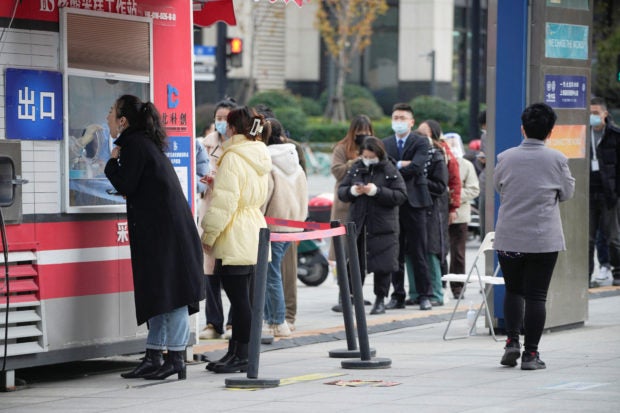 SHANGHAI — More than half of Chinese say they will put off travel abroad, for periods from several months to more than a year, even if borders re-opened tomorrow, a study showed on Tuesday, a sign that consumer recovery from COVID-19 measures will take time.

Mainland China retains some of the world’s most stringent measures on PCR testing and quarantine for international travelers, despite some domestic easing of curbs after last month’s unprecedented COVID protests.

Fear of infection with the disease was the top concern of those saying they would postpone travel in a survey of 4,000 consumers in China by consultancy Oliver Wyman, with worries about changes to domestic re-entry guidelines in second place.

“People have become cautious,” said Imke Wouters, a retail and consumer goods partner at the firm. “So even when they can travel, we don’t think they will come back right away.”

As many as 51% of those surveyed plan to delay international travel. And when they do, short-haul destinations will be the first to benefit, the consultancy said in its study, “China Consumption Recovery”.

The Asian financial hub of Hong Kong topped wishlists for travel, with 34% of respondents saying it would be their first stop after the re-opening.

The survey, in late October, followed the 20th Congress of the ruling Communist Party in Beijing, which brought President Xi Jinping a precedent-breaking third term as leader, at an event many had hoped would herald an opening-up after COVID.

China was formerly the world’s largest outbound tourism market, but its overseas visitors, who spent $127.5 billion on such trips in 2019, have virtually disappeared after it all but shut international borders in early 2020 and curbed non-essential travel by citizens.

China’s uncompromising “zero-COVID” effort hit the economy hard, and it is expected to reshape policies soon, though analysts have warned that any re-opening will be bumpy and complex.

As many as 83% of the executives in China who responded to the survey said “a long road to consumer confidence recovery” was set to affect their mainland business over the next year.

Nearly half, or 44%, of respondents cited an increase in personal savings as a reason they were likely to spend more next year.

China’s household deposits increased to 13 trillion yuan ($1.8 trillion) for the period from January to September this year, up from 8.5 trillion for the corresponding 2021 period.

Most spending in the next 12 months will focus on personal well-being, in areas linked to health, fitness or wellness.

The outlier, according to Wouters, was Gen Z, or the group born in the period spanning the mid- to late 1990s and the early 2010s, which would focus spending on “living in the moment”.

“We don’t expect to see the same boom in luxury spending that we saw in 2021,” she said. “But whatever growth we do see will be driven by Gen Z.”

Another year of restricted travel for China

China’s protests over lockdowns spread to campuses and communities abroad