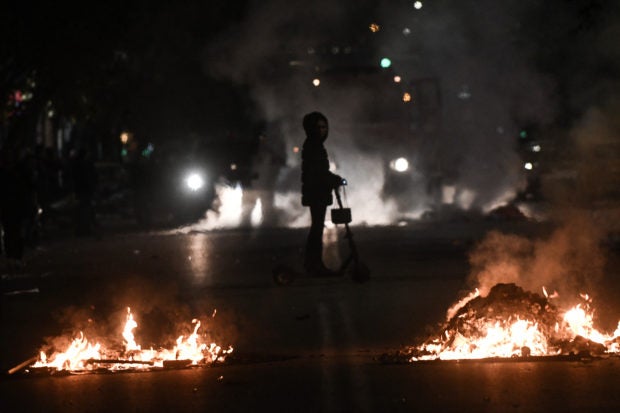 This photograph taken on December 5, 2022, shows a woman on a roller passing by burning roadblocks placed by members of the Roma community in Greece outside of the hospital where a Roma teenager is receiving treatment after being shot by police, in Thessaloniki. – The 16-year-old was shot in the head early December 5, 2022, after driving a truck away from a petrol station near the port city of Thessaloniki without paying, state TV ERT said and the incident also comes a day ahead of youth protests in several cities to mark the 2008 death of a Greek teenager, who was fatally shot by a police officer. (Photo by Sakis MITROLIDIS / AFP)

Thessaloniki, Greece — Violent scuffles broke out in Greece’s second-largest city on Monday after a Roma teenager was shot by police and left in critical condition.

The 16-year-old was shot in the head in the early hours of Monday morning after driving a truck away from a petrol station near the port city of Thessaloniki without paying, state TV ERT said.

The Greek police department said the youth had tried to ram officers in pursuit on motorbikes in his attempt to evade arrest.

Protesters burned roadblocks and threw Molotov cocktails at riot police on Monday evening, as well as smashing shop windows in the center of the city.

Earlier in the day, protesters and members of the teenager’s family had thrown rocks at riot police outside the hospital where he is receiving treatment before police responded by firing tear gas.

In a statement police said officers had fired two shots to try and stop him from attempting to hit police motorbikes.

After the shots were fired, the driver had lost control, hit a wall and was “transported to the hospital with serious injuries”, police said.

The officer who fired the shot was arrested and will appear before a prosecutor on Tuesday.

Another Roma youth was killed in 2021 near the port of Piraeus, also in a police pursuit.

The incident also comes a day ahead of youth protests in several cities to mark the 2008 death of a Greek teenager, Alexandros Grigoropoulos, who was also fatally shot by a police officer.

His death sparked weeks of sometimes violent protests in Greece.

Greek police clash with protesters in rally against mandatory vaccinations