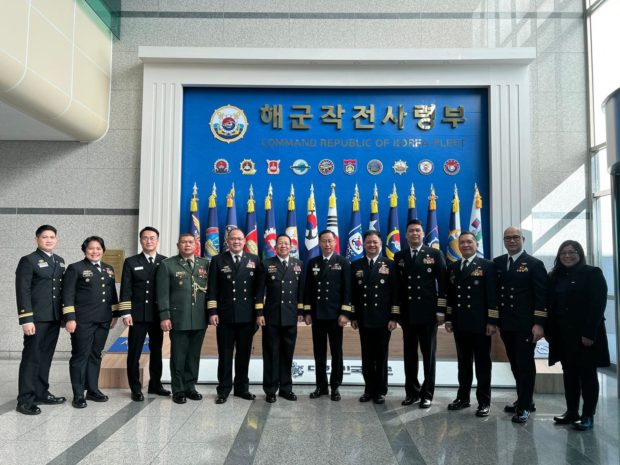 The Philippine Navy and the Republic of Korea Navy held the second navy-to-navy staff talks on Dec. 1, 2022 in Busan, South Korea. (Photo from the Philippine Naval Public Affairs Office)

The Philippine and US armies wrapped up their planning conference in Manila last week for next year’s iteration of “Salaknib” (shield in the Ilocano language), an annual exercise to strengthen the readiness and interoperability of both armies.

At the same time, the Philippine and South Korean navies also held their second staff-to-staff talks in Busan, South Korea, from Nov. 28 to Dec. 2, the Korean Embassy in Manila said.

The talks also touched on education and other trainings, people-to-people exchanges, logistics cooperation, combined exercises and ship visits, the Philippine Navy said in a separate statement.

The Philippine delegation, led by Commodore Jose Ma Ambrosio Ezpeleta, also visited the Korean submarine command at Jinhae Naval Base and a shipyard in Ulsan where naval vessels to be acquired by the Philippines are being built.

The military’s modernization program calls for the acquisition of two diesel-electric attack submarines worth P70 billion.

But dozens of projects under the current plan worth P300 billion remain unfunded. The diversion of government funds due to the pandemic has also been attributed to the delays in the modernization program.

Manila and Seoul have been further expanding their defense partnership through the years after it was cemented by the Philippine deployment of troops during the Korean War in the 1950s.

In October, the Republic of Korea Marine Corps sent 120 troops for the first time to the Kamandag exercise in Luzon, which involved 3,300 personnel from the Philippines, United States, Japan, and South Korea.

While Navy officials held talks in Busan, the Philippine Army also concluded planning sessions for the Salaknib exercise, which will be conducted in two phases—from mid-March to early April and June—in various areas in Luzon.

The annual drill is a testament to the “long-standing bilateral relations” of the two allies, according to Army chief Lt. Gen. Romeo Brawner Jr.

The Philippines recently dispatched 103 troops to the US-led regional training with allies in Hawaii that involved 6,000 American troops, and over 350 soldiers from the Philippines, Thailand, and Indonesia, along with nine observer countries.