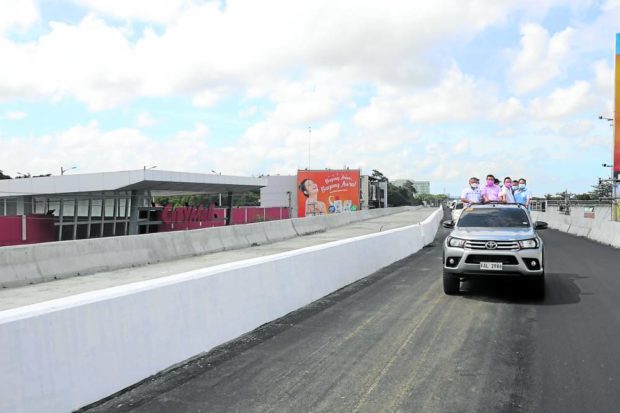 ‘SINKING’ FLYOVER | The Ungka Flyover in Iloilo City, built for P680 million, holds its topping ceremony (project is nearing completion) on April 25, 2022, with former Sen. Franklin Drilon and Iloilo city and provincial officials as guests. The structure, a vital link between Iloilo City and the international airport in Cabatuan town, was closed in September after it began to sink for still unknown reasons. (Photo by ARNOLD ALMACEN(

ILOILO CITY, Iloilo, Philippines — Local leaders here have raised concerns over the continued closure of a newly built multimillion-peso four-lane flyover that was hastily shut down only 12 days after it fully opened in September when it was found to be sinking for still unknown reasons.

Iloilo City Mayor Jerry Treñas said he sent a letter to Public Works Secretary Manuel Bonoan to ask what was delaying the repair of Ungka Flyover, which was built by the Department of Public Works and Highways (DPWH) for P680 million to ease travel time between this city and Iloilo International Airport in Cabatuan town.

The mayor was concerned about the increasing volume of commuters due to the Christmas season and the recent resumption of in-person classes in basic education and senior high school.

“With the volume of vehicular traffic aggravated by the Christmas season and resumption of face-to-face classes, it is highly anticipated that repairs are made around the clock to expedite the bridge reopening — all without compromising public safety,” Treñas’ letter read.

The 453.7-meter Ungka flyover was partially opened to the public on June 30 this year. Three months later, on Sept. 6, it was fully opened to commuters. But on Sept. 18, the DPWH closed the flyover after motorists complained about the “wavy feel” while driving over it, and amid reports and images of pools of water at the top of the flyover during rainy days.

Aside from the Ungka flyover, which straddles Iloilo City and the town of Pavia, Treñas also asked the DPWH to give updates about the Aganan flyover in Pavia town.

Iloilo Gov. Arthur Defensor Jr., at a press conference last Thursday, hinted at making a similar representation to Bonoan, but declined to comment further on the issue.

“It is important that we point out the exact problem and the solutions. In my experience with horizontal constructions, many of our national highways stand on soft soil. That is just the nature of the soil. I don’t want to speculate on the problems [in Ungka and Aganan], just that in the third district highways when I was a congressman, we have sinkholes there which we still don’t have solutions to until now. I don’t know if it’s the same, but if it is, then we have a bigger problem,” the governor said.

Provincial Board (PB) Member Matt Palabrica, a member of the PB infrastructure committee, said DPWH-Western Visayas Assistant Regional Director Jose Al Fruto failed to fulfill his promise before the PB on Oct. 2 that he would provide “periodic” reports on the Ungka Flyover.

Fruto only sent to the PB a letter on Nov. 28 stating that the DPWH regional office was still “finishing the design” of the flyover, said Palabrica.

“Why won’t they reveal the exact problems? I’m not satisfied that there was a difference in design because why would the DPWH [need to determine] any differences in design? With their background and schooling, with some designers even being sent abroad to study, here comes [suddenly] a question on the design? For me, there is something fishy there,” he said.

The Inquirer has reached out to Fruto but he has yet to respond to requests for comment. INQ