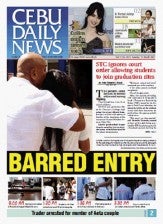 Their daughters wore their school uniforms.

But the 3 p.m. graduation rites of St. Theresa’s College high school went on without them, leaving a sad but calm group of families at the front gate of the campus on General Maxilom Avenue, Cebu City.

Security guards refused to open the gate, seeing they had no admission passes or invitations issued by the school administration.

“Inhuman, animal and cruel,” exclaimed one of the mothers.

A few other parents muttered complaints.

Two of the girls cried.

After a few minutes of waiting, with verbal pleas to the guards to heed a Temporary Restraining Order (TRO) issued by the Regional Trial Court directing the school to let two of the students march with their classmates for graduation, the group quietly walked away.

“The court was disrespected,” said Cornelio Mercado, counsel of four of five girls being punished by STC for photos posted in a Facebook account showing the students in bikinis and engaging in what the school called “lewd” and “immoral” behavior.

He said the unexpected act of defiance opens up the school to an action of contempt of court.

Inside the auditorium, where over 200 graduating seniors were called one by one to the stage to get their diplomas, the names of the five students were not mentioned.

In a press conference in the evening, STC legal counsel Romeo Balili said the court order of RTC Judge Wilfredo Navarro was “deficient” and that the school did not have to obey it.

“Judge Navarro made a grievous act. He issued a TRO without a bond,” he said.

Balili said the court did not require the complainants to put up a bond to answer for possible damages so “We have all the right not to comply with the TRO.”

Court sheriff Manuel Jimeno and a process server who arrived past 3 p.m. were also turned away at the campus gate. They asked the guards to let them talk to the principal. Jimeno emphasized that the TRO issued against the school for banning the participation of complaining students had to be carried out.

Rebuffed by the guards, Jimeno said he would report to the judge about the refusal of STC to heed the court order.

A public official and his wife, with their 16-year-old daughter tucked between them, walked ahead of the group in approaching the gate an hour before the event. They knew ahead that the school wouldn’t let them in after the high school principal, hours earlier, told them no passes or graduation program would be given to them.

“But we were hoping against hope, we could still attend,” he said.

Four students were seen in the group.

Two girls cried in disappointment and were hugged by their parents as they walked back to their cars.

Judge Navarro’s March 28 order directed STC, its principal and four teachers to let two students “fully participate” in the commencement exercises, join practice sessions for the event, and have their full names call along with the other seniors in the roll of graduates.

An additional order was issued “to treat the minors with kindness and civility befitting true graduates of a respectable institution sans any discrimination” during the commencement exercise.

Lawyer Mercado, who represents four of the five complaining students, said he would rather file a damage suit than a petition for contempt of court which would eat up time.

“I’d rather go on trial on the merits. Filing a petition to cite the respondents in contempt would just derail the proceedings. We still have to focus on the trial on the main case,” Mercado told Cebu Daily News in a phone interview.

“It was the court that was offended by the action. We will welcome any relief,” he said.

STC had filed a motion for reconsideration. It was tentatively set for 10 a.m. yesterday by the court staff but Judge Navarro didn’t show up at the Palace of Justice because he was in Lapu-Lapu City where he’s scheduled on Fridays to hear cases there.