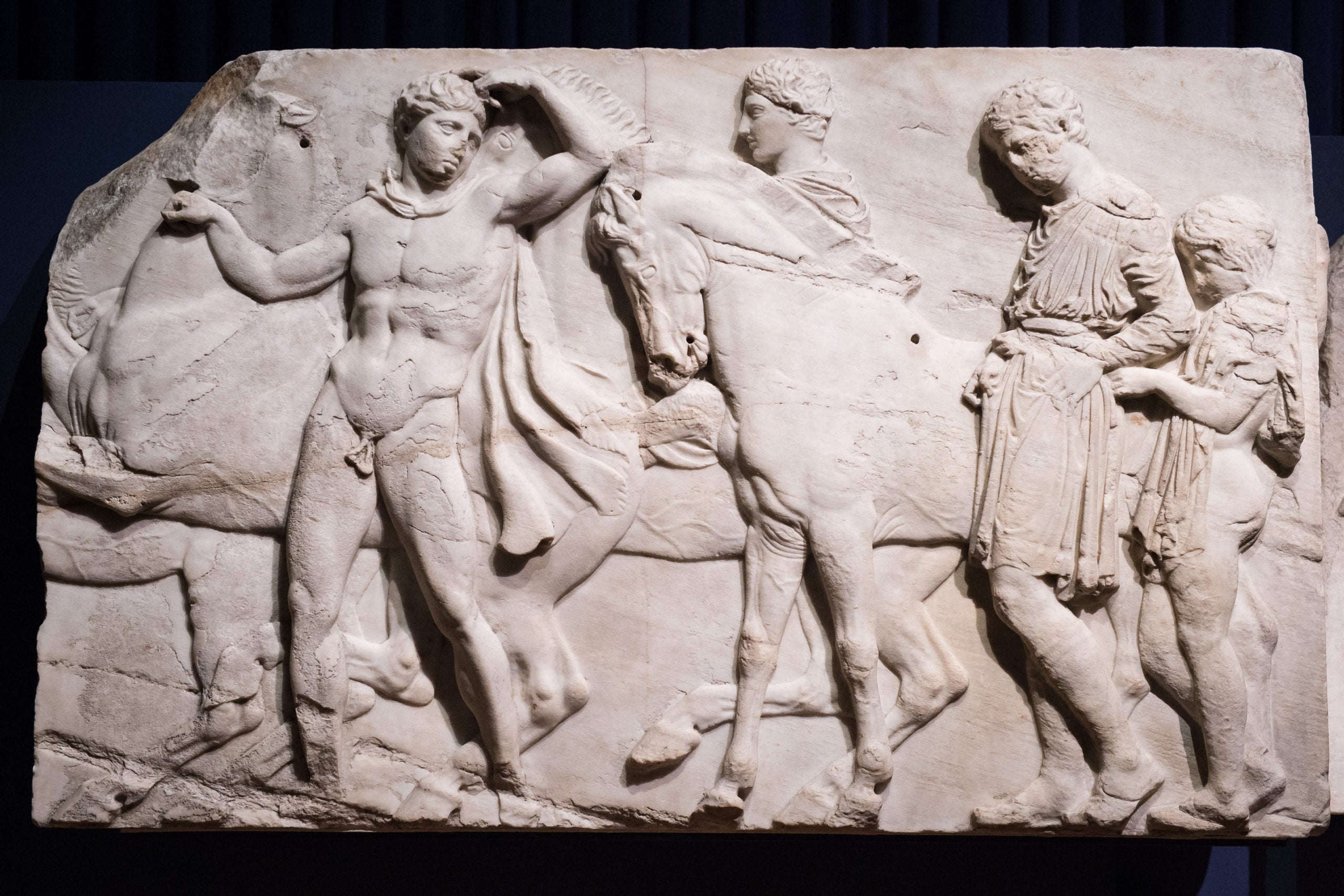 A section of marble frieze sculpture (438-432 BC) from the Parthenon in Athens, part of the collection that is popularly referred to as the Elgin Marbles, is displayed during a press preview of the British Museum’s “Defining beauty: the body in ancient Greek art” in central London on March 24, 2015. (Photo by LEON NEAL / AFP)

ATHENS, Greece — The British Museum and the Greek prime minister are in the “advanced stage” of “secret talks” over the “possible return” of the Parthenon Marbles, local media reported on Saturday.

The ancient sculptures, also known as the Elgin Marbles, were taken from the Parthenon temple in Athens in the early 19th century by British diplomat Lord Elgin and have been held by the British Museum ever since. Greece wants them returned.

It said the latest discussions took place at a hotel this week, while Mitsotakis was in the British capital to promote Greek business interests.

The “delicate” negotiations between Osborne, a former British finance minister, and the Greek leader were at “an advanced stage” but Greek officials cautioned they could still “hit a stalemate at the eleventh hour”, the paper said.

“It is possible that a mutually beneficial solution can be found. The Parthenon Sculptures can be reunited and at the same time the concerns of the British Museum can be taken into account,” ANA-MPA news agency reported Mitsotakis as saying on Monday.

“I understand that there is momentum. I am consciously talking about ‘reunification’ of the Sculptures and not about a ‘return’.”

The British Museum issued a statement on Saturday saying it wanted “a new Parthenon partnership with Greece” and was prepared to talk to Athens about that.

“(But) we operate within the law and we’re not going to dismantle our great collection, as it tells a unique story of our common humanity,” it stressed.

The Parthenon temple was built on the Acropolis in the 5th century BCE to honour Athena, the patron goddess of Athens.

In the early 19th century, workmen stripped entire friezes from the monument on the orders of the British ambassador to the Ottoman Empire, Lord Elgin.

Elgin sold the marbles to the British government, which in 1817 passed them on to the British Museum, where they remain one of its most prized exhibits.

Athens insists the sculptures were stolen.

Successive Greek governments have failed to make significant headway in the dispute.

In March 2021, the then UK prime minister Boris Johnson told Ta Nea he understood the “strength of feeling of the Greek people” on the issue.

But repeating Britain’s longstanding position, he insisted that the sculptures “were legally acquired by Lord Elgin, in accordance with the laws in force at the time”.

In January, the Times newspaper, a long-standing supporter of the British Museum on the issue, changed its position.

“Time and circumstances are changing. The sculptures belong in Athens. They must now return there,” the daily said.

In Islamic State war, like others, heritage always a target