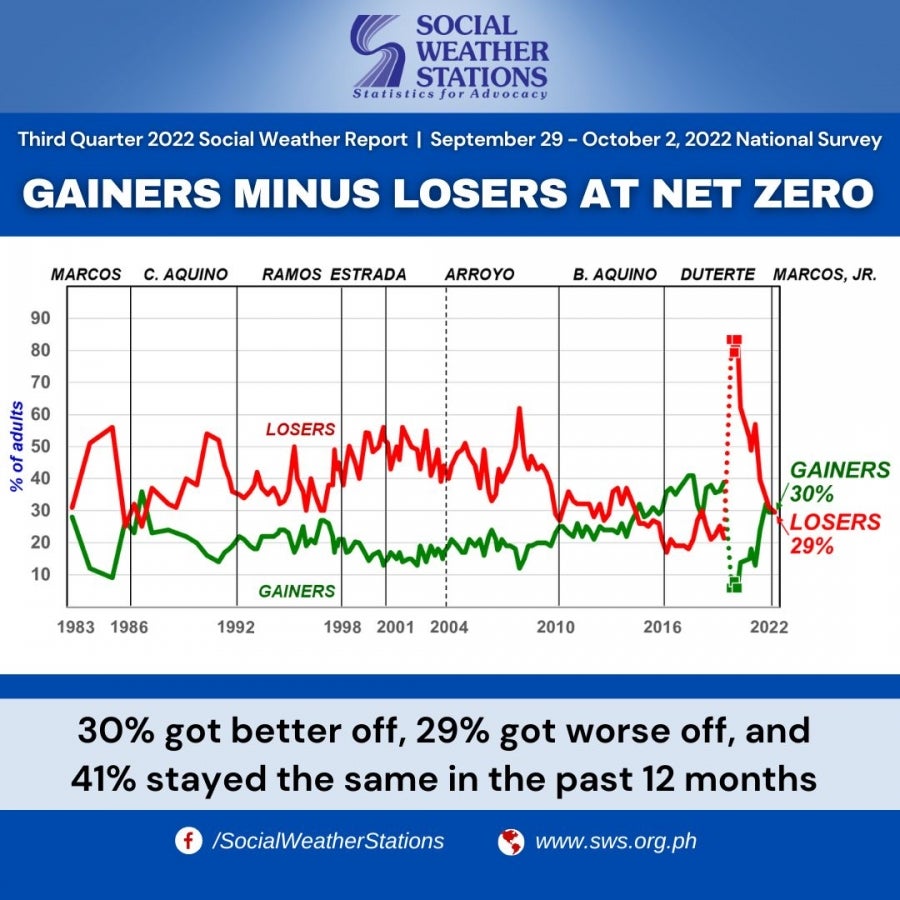 The survey which was released last Saturday, was conducted from September 29 to October 2, 2022, to determine the Net Gainer score for the month of October, which was the first under the administration of President Ferdinand “Bongbong” Marcos, Jr.

The SWS survey also revealed that 41 percent of the adult respondents said their quality of lives stayed the same from a year ago.

The Net Gainer score refers to the net score of “gainers” minus the numbers of “losers.”

Those who saw their lives being worse were referred to as the “losers” while those who said their lives have improved were the “gainers.”

The Net Gainer score for October is at zero (0), which the SWS classified as “fair.”

This was higher from the fair negative two (-2) score reported in June and April 2022.

The improvement in the Net Gainer score for October 2022 was due to the increase of “gainers” in Metro Manila, Balance Luzon, and Visayas, the SWS said.

The Net Gainer score in Metro Manila is “high” at nine compared to six previously, while the score in Balance Luzon is now at eight, compared to five previously.

The SWS said involuntary hunger refers to the respondents being hungry and not having anything to eat at least once in the past three months.

Involuntary hunger is significantly higher among “losers” than among “gainers” and “unchanged.”

According to the SWS, the quality-of-life survey has been fielded 146 times since April 1983, and the Net Gainer score has generally been negative for a long time.

“The Net Gainer score was generally negative until 2015 when it rose to positive numbers until the drastic deterioration beginning with the COVID-19 pandemic lockdowns,” the SWS said in a statement.

“It has since trended back upwards but still has not reached the positive range,” it added.