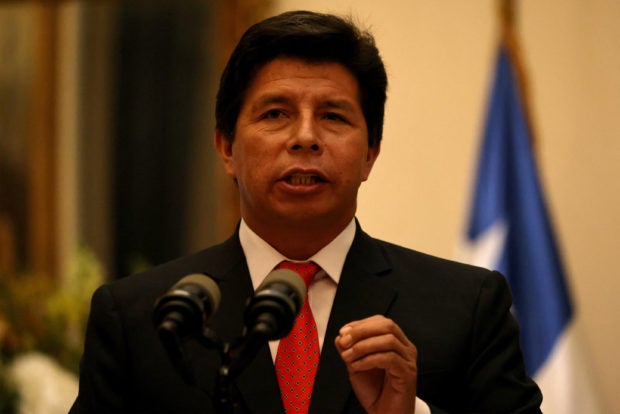 Lima, Peru — Peru’s Congress on Thursday voted to begin debate on whether to impeach leftist President Pedro Castillo, the third such attempt in his 16-month presidency.

Out of the lawmakers present, 73 voted in favor of a motion alleging Castillo had the “moral incapacity” to hold office. Thirty-two voted against and six members abstained.

Only 52 votes were needed for the motion to pass.

During the debate, Castillo and his lawyer will have the chance to present a defense.

The constitution requires 87 votes in Congress to remove a sitting president from office, a number that analysts say may be beyond the reach of the opposition.

The last impeachment attempt, which unfolded in March, only obtained 55 votes. A previous one in December 2021 never gained the votes for a formal debate in Congress.

Lawmaker Edward Malaga, who spoke in support of the debate motion Thursday, said the move was the “first step” toward an early election, which is currently not scheduled until 2026.

“We want to return to democracy with the removal (of the president),” he said.

The latest try at impeachment comes amid growing tension between Castillo, a 53-year-old teachers’ union leader, and the right-leaning legislature.

The motion, which was supported by right-wing and center-right parties and opposed by the president’s leftist political allies, calls for Castillo’s removal from office “due to permanent moral incapacity.”

In October, Castillo called the March impeachment attempt a “parliamentary coup” and requested an intervention by the Organization of American States (OAS).

The OAS, for its part, had hours earlier from its headquarters in Washington called for the two branches to form a “political truce,” backed by a third party, while the country works to resolve the crisis.