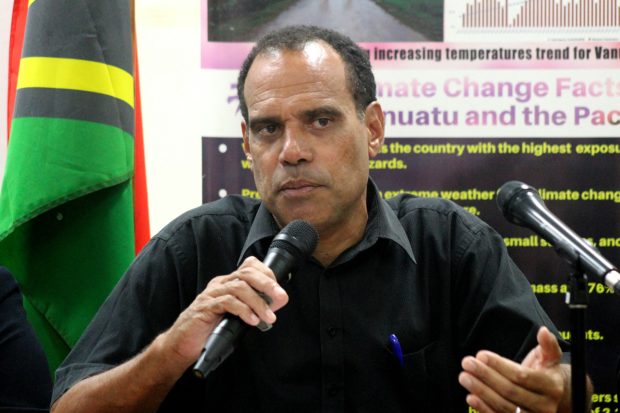 PORT VILA, Vanuatu — Vanuatu is drawing up plans to relocate “dozens” of villages within the next two years, as they come under threat from rising seas, the Pacific nation’s climate chief told AFP Thursday.

Climate Change Minister Ralph Regenvanu said dealing with the impact of global warming was a major challenge facing Vanuatu’s 300,000 inhabitants who live on a chain of islands strung out between Australia and Fiji.

He said Vanuatu’s government has identified “dozens” of villages in “at-risk areas” to be relocated “within the next 24 months” while other settlements have also been earmarked to move in the longer term.

“Climate displacement of populations is the main feature of our future. We have to be ready for it and plan for it now,” said Regenvanu, who took over his ministerial portfolio after a snap election in October.

“It’s going to be a huge challenge and a huge tragedy for many people who would have to leave their ancestral land to move to other places, but that’s the reality.”

Half of Vanuatu’s population was affected when Cyclone Pam battered the capital Port Vila in 2015, killing a dozen people, destroying crops and leaving thousands homeless.

Vanuatu is ranked as one of the countries most susceptible to natural disasters like earthquakes, storm damage, flooding and tsunamis, according to the annual World Risk Report.

Other Pacific nations are also looking to move under-threat communities, including Fiji where dozens of villages have been earmarked for relocation owing to the impacts of the climate crisis.

Scientists predict sea levels in the Pacific will rise between 25–58 centimeters (9-22 inches) by the middle of the century.

That is a devastating prospect for Vanuatu, where around 60 percent of the population live within a kilometer of the coast.

‘All sorts of threats’

“Our greatest challenge right now on Vanuatu is basically keeping our populations safe,” he said.

“We’re finding more and more that our people are subject to all sorts of threats from volcanoes, flooding, cyclones and so on.

“So we have to engage now in moving populations and building resilient infrastructure so that our people are safer in the coming years.”

Vanuatu already has experience of moving its people.

In 2005, it was one of the first Pacific nations to move an entire community on the northern island of Tegua from a flood-prone coastal area to higher ground.

And in 2017, all 11,000 people living on Ambae, an island in the country’s north, were ferried by a rag-tag armada of boats to other isles after the Manaro Voui volcano erupted, raining down rock and ash on villagers.

In May, Vanuatu’s parliament declared a climate change emergency and its government is seeking to speed up global action by leading efforts to take the matter to the Hague-based International Court of Justice.

Regenvanu attended the UN’s COP27 summit in Sharm el-Sheikh last month, where a landmark deal was struck to help vulnerable countries cope with climate change by providing a “loss and damage” fund.

The nations attending COP27 repeated a commitment to limit global warming to 1.5 degrees Celsius (34.7 degrees Fahrenheit) from pre-industrial levels, but Regenvanu said the pledges did not go far enough.

“Basically, there’s not enough commitment to reducing emissions,” he said.

“And so we’re going to see temperatures increase beyond 1.5 degrees which we know will be disastrous for the Pacific — we have to focus on adaptation and particularly loss and damage.”