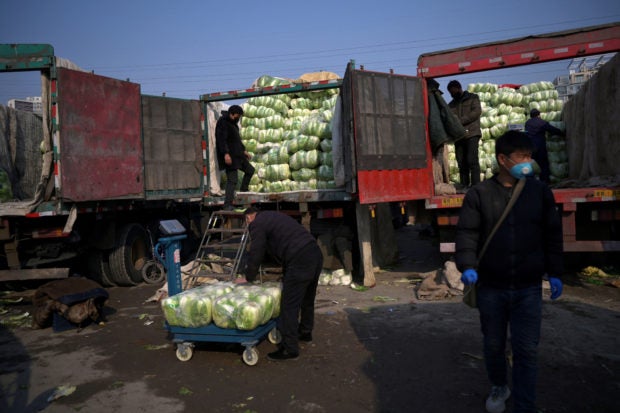 People wearing face masks move cabbages at a wholesale market for agricultural products, as the country is hit by an outbreak of the novel coronavirus, in Beijing, China February 19, 2020. REUTERS

BEIJING — China’s vegetable growers are ploughing their produce back into their fields or leaving it to rot, as widespread restrictions to curb the spread of COVID cut off distribution channels and close markets.

Thousands of tonnes of vegetables are unsold in central Henan province, one of the country’s top producing regions, according to local media reports, charities and farmers, while farmers in northern Shandong province, another top growing region, are also unable to reach markets.

Despite a wave of unprecedented protests against tough measures to curb the spread of COVID, China has not relaxed restrictions on movement in many areas in response to record cases of the disease.

“I feel so bitter whenever I go to the land and can’t help bursting into tears,” said a 36-year-old Henan farmer surnamed Wang, who has left his crop of yellow-heart cabbages in the ground to perish in imminent frosts.

Wang’s cabbage is usually sold in large cities like Beijing, Shanghai and Tianjin. This year, his merchant can’t reach his farm, and he can only get 35 cents per half kilo compared with 80 cents last year.

“I would rather not sell it and leave it there,” he said.

The situation is exacerbated by a fragmented supply chain, where small farmers sell to middlemen who purchase for large wholesale markets in cities.

Many traders are unable to travel, restricted from leaving their homes and prevented from exiting motorways to reach rural areas or other cities.

“It’s not easy to get off the motorway, and then you’re required to quarantine. The cost is too high, so no one dares to do it,” said a Shandong-based vegetable buyer surnamed Cui.

Cui typically sends up to 20 large trucks of cauliflower, cabbage, and lettuce to markets daily in this season.

Now markets in major cities like Handan, Tianjin, and Shijiazhuang are all closed and growers in Shandong are also impacted, he said.

“In Dezhou vegetables are all being ploughed into the ground, celery, kale, cabbage, nobody wants them,” said Cui.

Others shared videos on social media, showing them ploughing crops into the ground and comparing minimal prices for their produce with high retail prices in cities.

Henan produced 76 million tonnes of vegetables last year, or about 10% of the nation’s supply, according to the National Bureau of Statistics.

The Ministry of Agriculture and Rural Affairs said on Tuesday it had launched an initiative to sell Henan vegetables at large wholesale markets, selling 4,677 tonnes last week.

It also set up a hotline to connect farmers with sellers, and said it would find cold storage facilities to stock winter vegetables.

Despite such efforts, vegetable prices are likely to go up during the Lunar New Year holiday next month, said Cui.

“The local government is too busy with the epidemic. Who cares about vegetables?” he asked.