Amid homeless crisis, New York to step up forced hospitalization of mentally ill 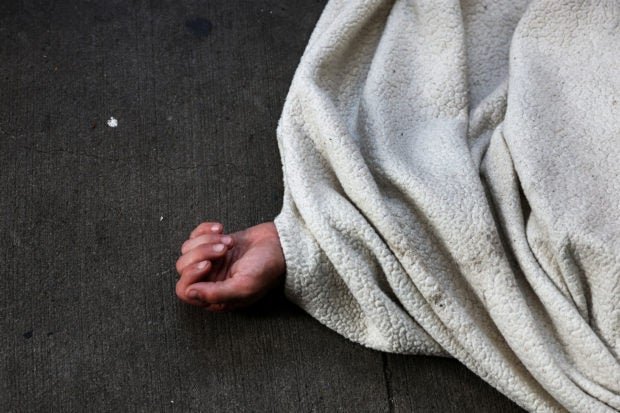 A person sleeps under a blanket on the sidewalk along 42nd Street, outside Port Authority bus terminal in New York City, New York, US, August 26, 2022. REUTERS/Shannon Stapleton/File Photo

New York City Mayor Eric Adams rolled out a plan on Tuesday to allow more mentally ill homeless people to be hospitalized against their will in order to tackle “a crisis we see all around us.”

Adams, speaking from City Hall, said the city had a “moral obligation” to help New Yorkers struggling to meet their own basic needs because of mental illness, even if those people resisted intervention.

The Democratic mayor has made addressing the city’s homelessness crisis a top goal of his administration since taking office in January. The Coalition for the Homeless, an advocacy organization in New York City, estimated earlier this year that more than 50,000 people were sleeping in city-run shelters each night.

“We can no longer deny the reality that untreated psychosis can be a cruel and all-consuming condition that often requires involuntary intervention, supervised medical treatment and long-term care,” Adams said.

“We will continue to do all we can to sway those in need of help to accept services voluntarily, but we will not abandon them,” he added.

New York law allows for involuntary hospitalization when a person’s mental illness prevents them from providing for their own basic needs, as well as when they present a danger to themselves or others.

Law enforcement has not commonly used the practice, and advocates for homeless populations urged the city to pursue other approaches that do not involve police while responding to mental health issues.

“The administration should focus on expanding access to voluntary inpatient and outpatient psychiatric care, offering individual hotel rooms to all unsheltered people, and cutting through red tape that has left far too many permanent supportive housing units sitting vacant,” Jacquelyn Simone, policy director for the Coalition for the Homeless, said on Tuesday.

The city published updated guidance on Tuesday on its standard for involuntary hospitalizations. Adams said the city would immediately provide training for emergency personnel, hospital staff and other outreach workers on how to provide “compassionate care” while removing someone from the streets who is undergoing a mental health crisis.

He said there would be a telephone line for police officers to get in touch directly with clinicians for consultation while dealing with cases of mental illness.

New York City has seen a rise in violence and a series of random attacks on subway riders in the last year, which Adams and New York Governor Kathy Hochul have vowed to address with expanded mental health services and increased police presence on subways.

The mayor’s office said on Tuesday that the city would begin deploying “clinical co-response teams” of health workers and police officers to patrol high-traffic subway stations on the expectation that more homeless people would gather there during the winter months.

Mental health in a time of pandemic: The invisible suffering

Mental Health Day: The need to defuse a ticking time bomb for millions