UK royals in US spotlight as William and Kate visit 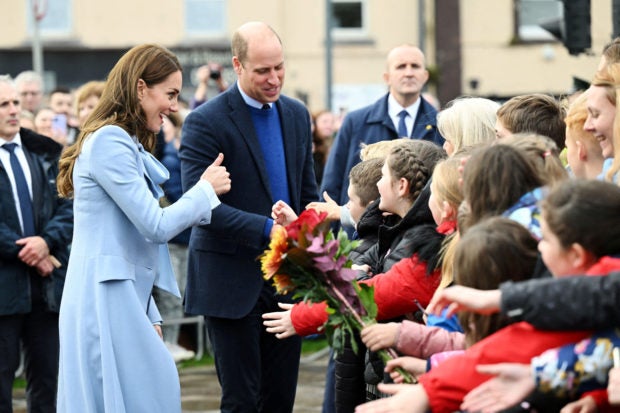 LONDON — Prince William and his wife Kate fly out to the United States on Wednesday for their first visit for eight years, as an intense media spotlight on the British royal family and the sons of King Charles shifts across the Atlantic.

The U.S. trip will be the new Prince and Princess of Wales’ first overseas excursion since the death of Queen Elizabeth, which meant William – Charles’s eldest son – became the heir to the throne.

The visit has gained added significance as it comes a few days before William’s Los Angeles-based younger brother Prince Harry and American wife Meghan take the limelight at a prestigious awards ceremony ahead of a Netflix TV documentary and revealing memoir.

For royal commentators and many in the British press, it will be a chance to contrast the popularity and lives of the two brothers, whose falling out, along with Harry and Meghan’s criticism of the monarchy, has become one of the defining stories of the House of Windsor in recent years.

“The royal family are a competitive bunch, they always have been and always will be,” royal biographer Andrew Morton told Reuters.

“Prince William is the future king, Prince Harry no longer has a royal role. But nonetheless, they will be looking at the optics to see who had the biggest crowds, who had the most column inches and if they tell you otherwise, don’t believe them.”

William and Kate will visit Boston, primarily to attend an awards ceremony for the Earthshot environmental prize which the prince set up. It is being viewed by the royals as a trip rather than a more traditional tour.

The last time they visited the United States in November 2014, they were guests of then-President Barack Obama at the White House.

This visit will be lower key: they will visit local environmental, educational and community projects in Boston, although the Earthshot ceremony itself will be a star-studded event with the likes of Grammy-winning singer Billie Eilish and Oscar-winning actor Rami Malek.

“Our number one focus… is the Earthshot Prize and we won’t be distracted by other things,” a source close to William said.

The drama surrounding the Windsors will also draw in America’s most famous political family, the Kennedys.

During their three-day stay, William, 40, and Kate, 40, will visit the John F. Kennedy Presidential Library and Museum where they will meet Caroline Kennedy, the daughter of the former president and now U.S. Ambassador to Australia.

A few days later, Harry and Meghan, the Duke and Duchess of Sussex, will go to New York for the Robert F. Kennedy Ripple of Hope Award where they will be honored for their commitment to social change and human rights work, in a group which also includes Ukrainian President Volodymyr Zelensky.

For many in the British press, Harry and Meghan have become the royal villains, turning their back on duty while using their royal status to forge out lucrative careers and earn millions, including from an upcoming Netflix documentary series.

The involvement with Netflix has been especially criticized because of the depiction of events about the royals in the U.S. streaming service’s popular drama “The Crown”, most notably surrounding Charles and the break-up of his first marriage to Princess Diana – William and Harry’s late mother.

In contrast, William and Kate are portrayed in the British media as dutiful and earnest, encapsulating the style of monarchy set by the late queen.

Polls suggest there is a generational division, with younger Britons warming to Harry and Meghan more than those aged over 60.

“Megan and Harry are a polarizing couple,” said Morton, adding the couple who he described as “the king and queen of California” had been mobbed on their last trip to New York.

“It’ll be interesting to look at the size of the crowds in New York, where Megan and Harry accept their award, compared to the crowds for William and Catherine in Boston.”

“I think it’s only natural for people to want to pit these two couples against each other,” she told Reuters. “But I think American audiences are not viewing this as a competition.”

She said there would be huge U.S. interest in both William and Kate’s trip and the Netflix documentary, while Harry’s upcoming memoir “Spare”, released in January, would be “the book of the year”.

“I can tell you that Americans have never been as enthusiastic about the royal family as they are now,” said Morton, who was in California to promote his latest book “The Queen”.

“‘The Crown’, for all the criticism, has actually introduced a new generation of royal addicts,” he said.

‘Fab four’: still estranged but side by side for Queen Elizabeth