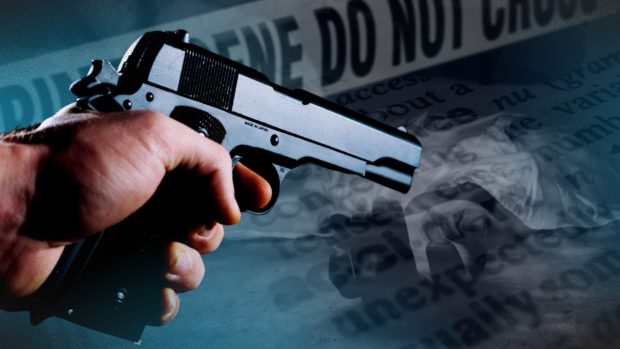 MANILA, Philippines—Who would have thought that while men of the elite Special Weapons and Tactics (SWAT) team of the Philippine National Police (PNP) in San Pablo City, Laguna were checking their firearms, the life of one of them would come to an end?

As stated by police, it was last Thursday (Nov. 24) when Cpl Fhrank Aldene Dela Cruz and his co-SWAT members were checking their firearms for inspection, but Dela Cruz died after being hit in the chest with a bullet from a colleague’s gun.

This, as Cpl George Mervin Duran, who was told that their service firearms had been switched, examined his .9 mm pistol and removed its magazine while they were near the village hall of Barangay 1-B.

But when Duran was about to check the firearm’s chamber to see if there was still a bullet inside, police said the firearm went off and hit 30-year-old Dela Cruz, who was rushed to the hospital but pronounced dead on arrival.

Dela Cruz’s death, which was caused by accidental firing, prompted the PNP to instruct all its commanders to intensify the conduct of gun safety trainings to make certain that their men are adept at handling firearms.

Col. Redrico Maranan said as soon as the report reached the office of PNP chief Gen. Rodolfo Azurin Jr., the directive was immediately issued: “That should be a priority, it should be conducted weekly and take a look if we have lapses.”

As stated by Maranan, who is the head of the PNP Public Information Office, policemen need to maintain proficiency, especially because “one may forget it if they do not practice it from time to time.”

The absence of proficiency in handling firearms, he said, “may lead to loss of life, just like what happened in San Pablo [City],” where Dela Cruz died in an accidental firing.

Criminal and administrative charges had already been filed against 31-year-old Duran, with police saying that he will face a case of reckless imprudence resulting in homicide.

But as stressed by Maranan, Azurin’s directive for ground commanders to conduct a continuous firearm proficiency training is actually a “reiteration” as the PNP last year, which was still led then by Gen. Guillermo Eleazar, gave the same instruction.

Looking back, it was in 2021 when Eleazar said “as members of a law enforcement agency entrusted by the people to carry firearms, we have to make sure that the concept of responsible gun ownership would always be at the heart and mind of every police.”

Based on INQUIRER.net archives and several news reports, the Nov. 24 incident is not the first case of accidental firing because as early as 2015, a nine-year-old girl had been killed when the gun of his brother, a policeman, went off when it fell from the wall.

Then in 2019, the wife of a policeman was killed while his daughter was wounded when his gun accidentally fired while being “unloaded” inside their house in Tondo, Manila. The bullet went through the wooden wall of the room where the victims were sleeping. 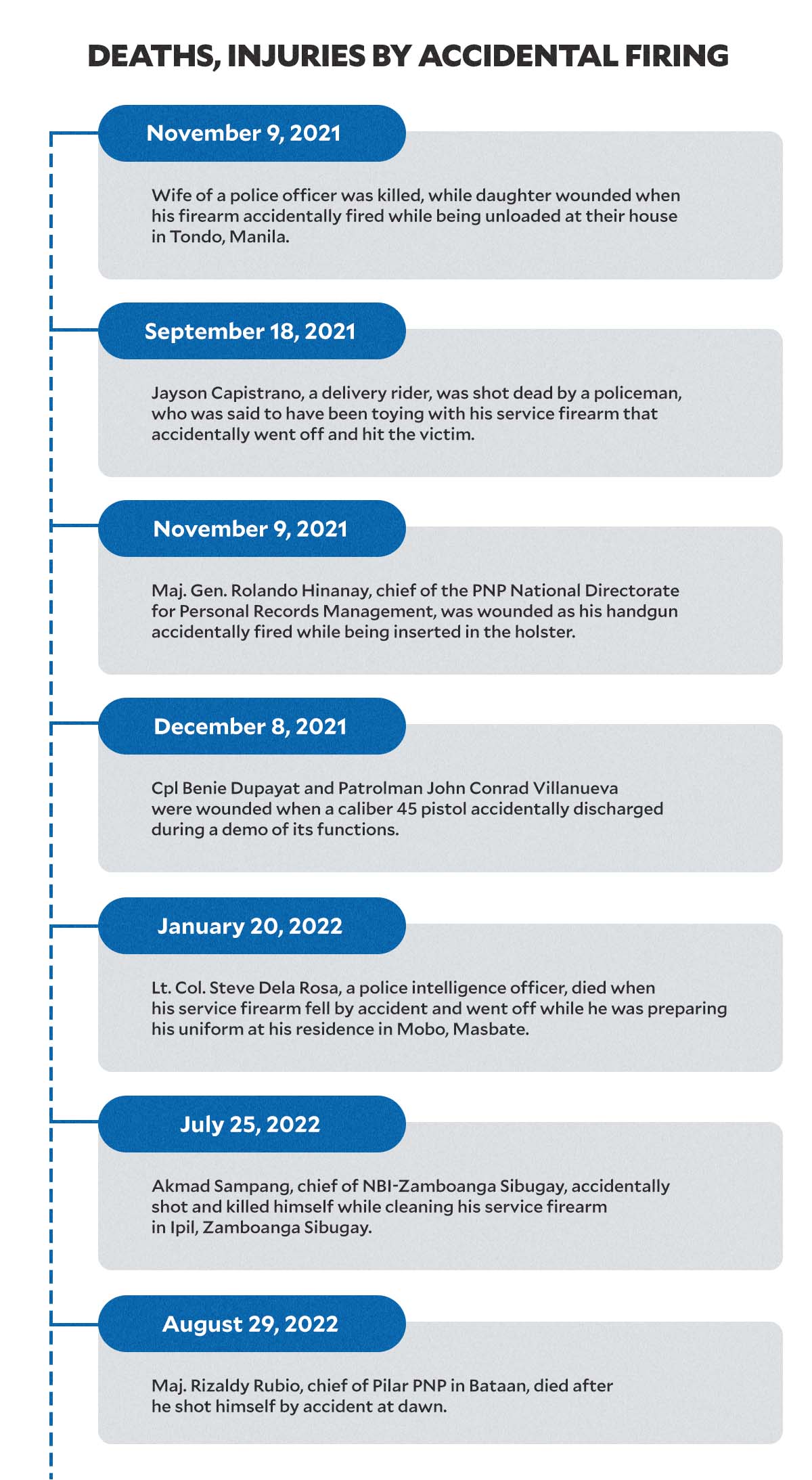 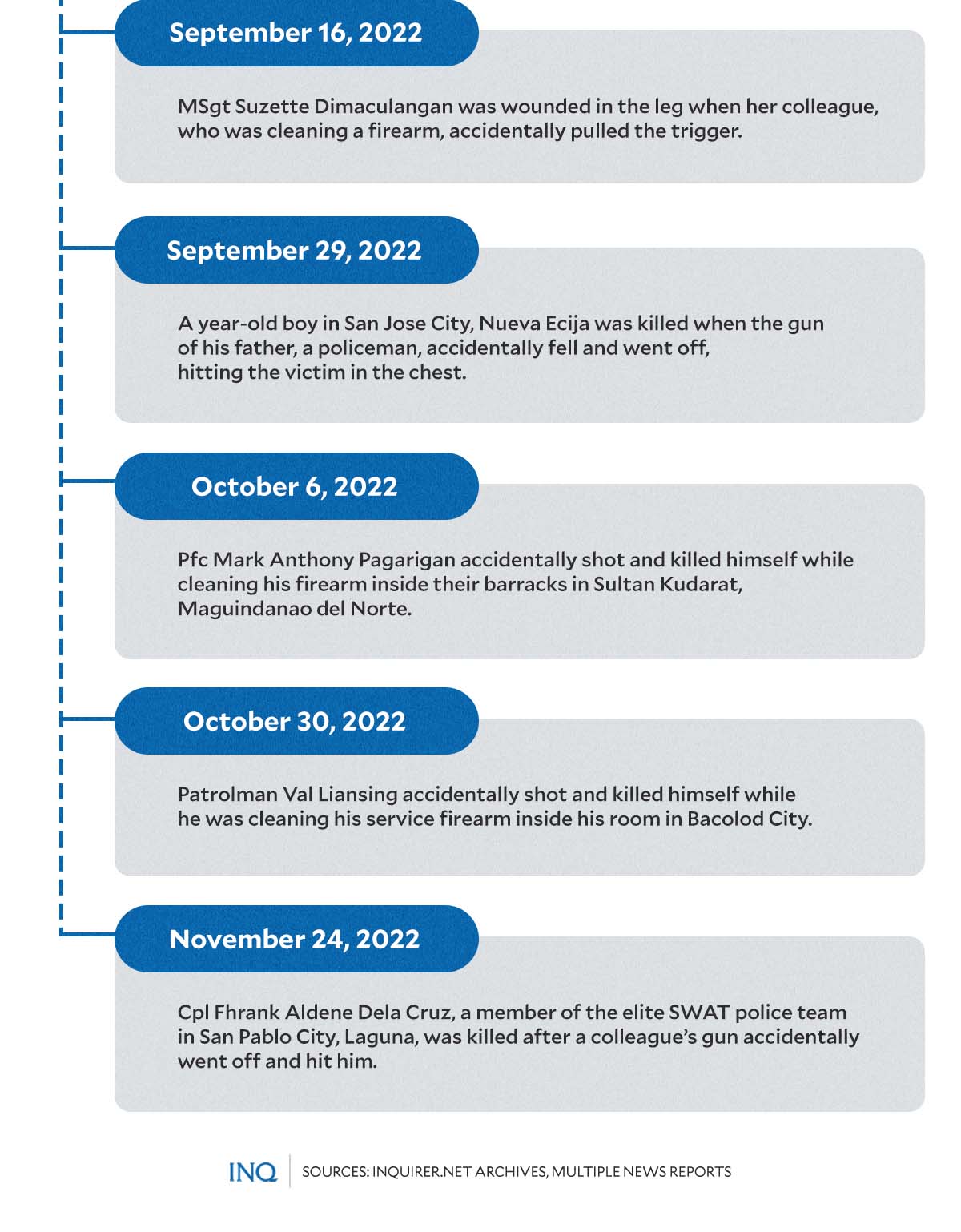 It was also in 2019 when Patrolman Jun Utto, who was assigned to the Regional Mobile Force Battalion of the National Capital Region Police Office, wounded himself when his firearm accidentally discharged, hitting his right knee, while alighting a jeep.

Then on Sept. 18, 2021, Jayson Capistrano, a delivery rider, was shot dead by a policeman, who was said to have been toying with his gun that accidentally went off and hit the victim.

This prompted Eleazar to issue a directive to “improve our operational capability,” stressing that he tasked the PNP Training Service with conducting a regular refresher course on gun safety and marksmanship training for all policemen.

Maj. Gen. Rolando Hinanay, the head of the PNP National Directorate for Personal Records Management, likewise wounded himself on Nov. 9, 2021 as a handgun accidentally fired while being placed in the holster.

Then less than a month later, Dec. 8, 2021, Cpl Benie Dupayat and Patrolman John Conrad Villanueva were hit by a caliber .45 pistol that accidentally discharged a round while a demo of its operating functions was being held.

Because of this, the PNP said the policy on firearms training should be reviewed, stressing that “if accidents like this can happen in training even under controlled conditions, it is likely to happen anytime during the course of normal police functions.”

Accidental firing also became fatal for Lt. Col. Steve Dela Rosa, a police intelligence officer, who died when his service firearm fell by accident and went off while he was preparing his uniform at his residence in Masbate last Jan. 20.

Even the chief of the National Bureau of Investigation in Zamboanga Sibugay fell victim to accidental firing after his service firearm, which he was cleaning, went off and hit him on July 25.

Then last Aug. 29, Maj. Rizaldy Rubio, the head of the PNP in Pilar, Bataan, died after he shot himself by accident at dawn. Last Sept. 16, a police officer was also wounded when her colleague, who was cleaning a firearm, accidentally pulled the trigger.

Last Sept. 29, a year-old boy in San Jose City, Nueva Ecija was killed when the gun of his father, a policeman, accidentally fell and went off, hitting the victim in the chest.

Pfc Mark Anthony Pagarigan’s life also came to an end on Oct. 6 when he accidentally shot and killed himself while cleaning his firearm inside their barracks in Sultan Kudarat, Maguindanao del Norte.

Then last Oct. 30, Patrolman Val Liansing likewise shot and killed himself by accident while he was cleaning his service firearm inside his room in Bacolod City.

As stated by the PNP, there are three general rules when it comes to handling firearms:

Likewise, there are specific rules of safe gun handling, which are related to the shooter and his behavior, like “treat every firearm as if it were loaded” and “think before shooting.” The rest of the rules are these:

The PNP said gun owners should always make sure that his or her firearm is in good mechanical condition by having it checked for signs of erosion, cracking or wear by the factory, a qualified armorer, or a factory gunsmith.

It also stressed that someone who carries a gun, which may have a plugged or partially obstructed barrel, should never try to fire it. Also, any modifications to a firearm should only be made by a qualified individual. 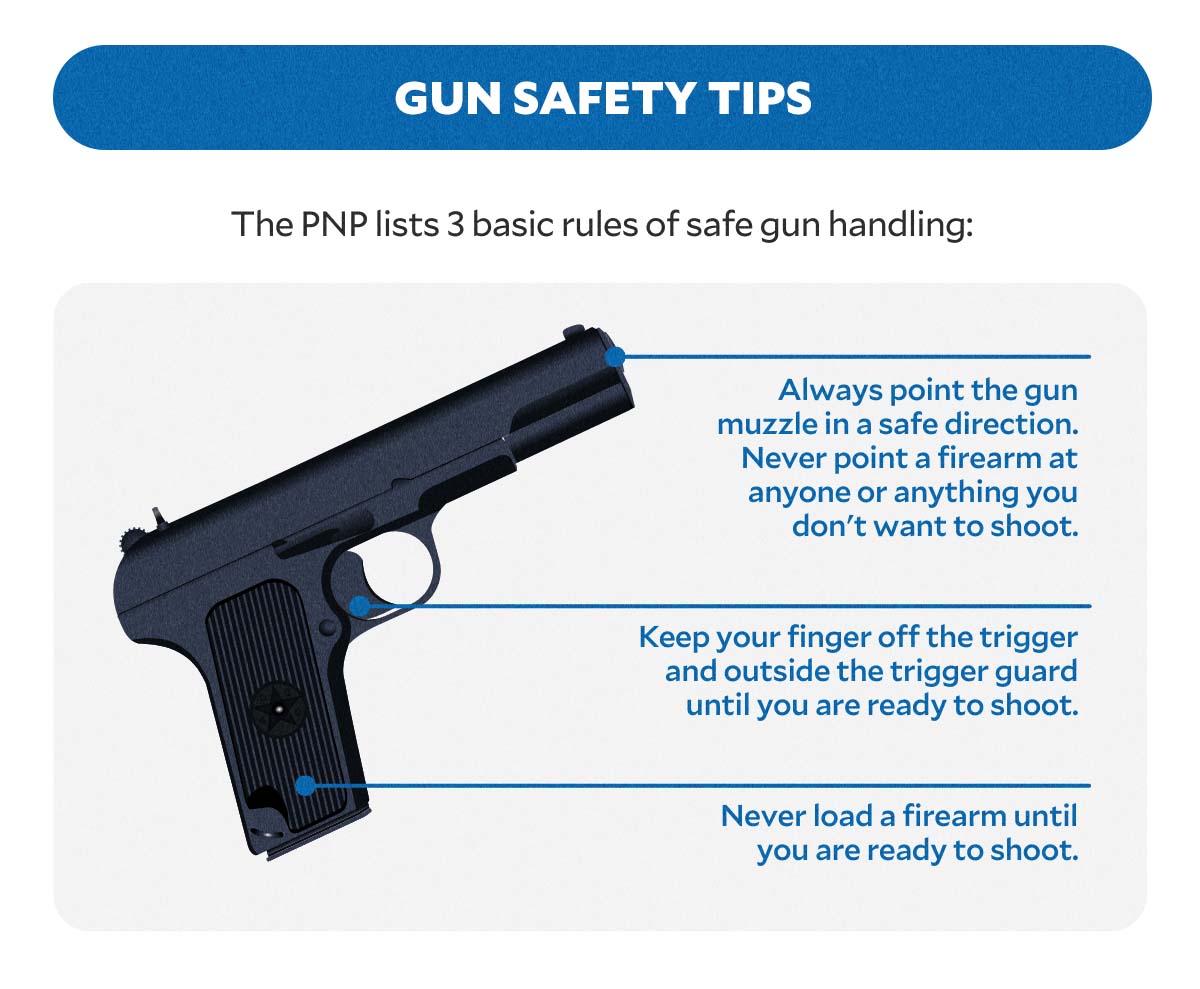 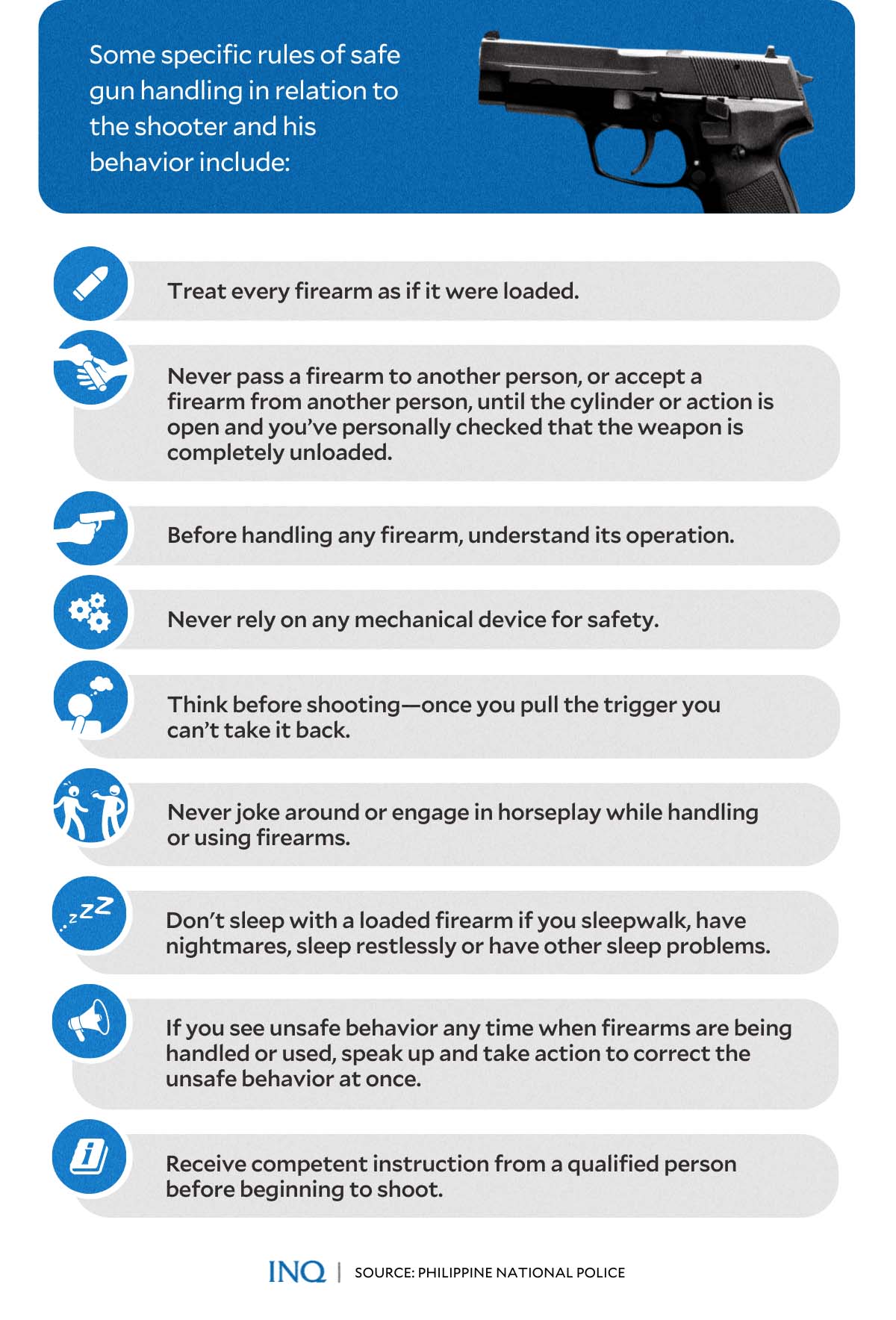 “Be sure all accessories, such as holsters and grips, are compatible with the firearm and won’t interfere with its safe operation,” it said.

“It is your responsibility to ensure that your firearm is always either about your person and in your personal control, or positively secured from access by children or other unauthorized parties. Prevent tragedy: lock down your firearms when they aren’t in use.”

It also stressed that generally, one should avoid unloading a firearm by working the cartridges through the action one-at-a-time—drop the magazine and then eject the round which may be left in the chamber, instead, if possible.