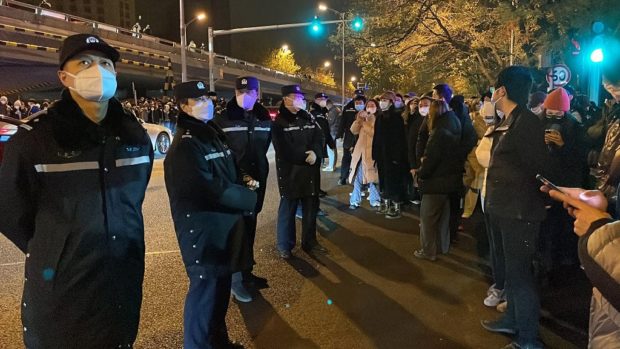 Policemen watch over protesters gathering along a street during a rally for the victims of a deadly fire as well as a protest against China’s harsh Covid-19 restrictions in Beijing on November 28, 2022. A deadly fire on November 24, 2022 in Urumqi, the capital of northwest China’s Xinjiang region, has become a fresh catalyst for public anger, with many blaming Covid lockdowns for hampering rescue efforts, as hundreds of people took to the streets in China’s major cities on November 27, 2022 to protest against the country’s zero-Covid policy in a rare outpouring of public anger against the state. Authorities deny the claims. (Photo by Michael Zhang / AFP)

UPDATED Shanghai, China — Chinese police detained three people on Monday at a site in Shanghai where demonstrators gathered over the weekend to protest against Covid-19 lockdowns and call for greater political freedoms, an AFP journalist witnessed.

A deadly fire last week in Urumqi, the capital of northwest China’s Xinjiang region, has become a catalyst for public anger, with many blaming Covid lockdowns for hampering rescue efforts.

Large crowds had congregated on Sunday in Shanghai’s downtown area, with police clashing with protesters as they tried to stop groups from converging at Wulumuqi street, named after the Mandarin for Urumqi.

On Monday there was a heavy police presence again, with officers pulling people aside and ordering them to delete photos from their phones.

AFP witnessed three people being led away by police, and one young man subsequently released.

When asked why one of them was taken away, an officer told AFP it was “because he didn’t obey our arrangements” and then referred the reporter to local police authorities.

The man who was released told AFP he had been detained for filming the intersection where the protests had previously occurred.

He was taken to a police van before being promptly let go.

“As a Shanghai citizen, I have the freedom to record this,” he said. “This is Shanghai now. There’s no freedom.”

Another man who took a picture of the Wulumuqi street sign was also approached by a police officer and had a protracted discussion with him.

Roads that were closed Sunday night after the protests have been reopened.

At one intersection, more than a dozen police stood guard, with buses and cars filled with reinforcements waiting along the road nearby.

Streets were covered with blue barriers, which AFP saw being erected overnight, for several blocks along and around Wulumuqi street.

Shanghai police had not responded on Monday to repeated enquiries about how many people had been detained.