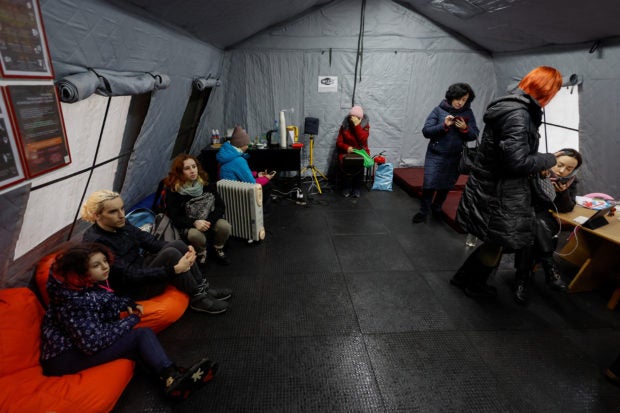 Local residents charge their devices, use internet connection and warm up inside an invincibility centre after critical civil infrastructure was hit by Russian missile attacks in Kyiv, Ukraine November 24, 2022. REUTERS FILE PHOTO

LVIV/KYIV — Ukrainian President Volodymyr Zelensky said on Sunday that Russia would surely launch new missile attacks on his country, and warned defense forces and citizens to be prepared to withstand a new week of strain on the power grid.

Snow fell in Kyiv and temperatures hovered around freezing on Sunday with fog forecast overnight.

City authorities said workers were close to completing restoration of power, water and heat, but high consumption levels meant some blackouts had been imposed. Millions in and around Kyiv were coping with disruptions caused by waves of Russian air strikes.

“We understand that the terrorists are planning new strikes. We know this for a fact,” Zelensky said in his nightly video address. “And as long as they have missiles, they, unfortunately, will not calm down.”

Zelensky said the coming week could be as difficult as the previous week, when attacks on electricity infrastructure subjected Ukrainians to the most acute power cuts since Russian troops invaded in February.

“Our defense forces are getting ready. The entire country is getting ready,” he said. “We have worked out all the scenarios, including with our partners.”

There was no immediate response from Moscow to Zelenskiy’s claims.

Since Russia invaded Ukraine on Feb. 24, Moscow has said it does not target the civilian population. The Kremlin said on Thursday that Kyiv could “end the suffering” of its population by meeting Russia’s demands.

Russia annexed swaths of Ukraine’s east and south in September and President Vladimir Putin said Moscow’s territorial demands are non-negotiable. After the annexation Zelenskiy said he would not negotiate with Moscow and also insisted that Ukraine’s territorial integrity cannot be negotiated.

The situation, however, remained intense along front lines in various part of Ukraine, Zelenskiy said in his nightly address.

“The most difficult is in Donetsk region as has been the case in previous weeks,” he said.

The General Staff of Ukraine’s Armed Forces said Russian troops had shelled a dozen villages in Donetsk, including the main targets of Bakhmut and Avdiivka.

“The consumption restriction regime is still in place due to a capacity deficit, which currently stands at around 20%,” Ukrenergo said on Telegram.

Moscow has targeted vital infrastructure in recent weeks through waves of air strikes that have sparked widespread power outages and killed civilians.

Fresh strikes last Wednesday caused the worst damage so far in the nine-month conflict, leaving millions of people with no light, water or heat, as temperatures fell below 0 Celsius (32 Fahrenheit).

Zelensky said utility and emergency teams were working around the clock to provide power, with the situation “under control” though most regions were subject to scheduled blackouts to help restore the grid.

In Kherson, a city in southern Ukraine abandoned by Russian troops this month, regional governor Yaroslav Yanushevych said 17% of customers now had power. Other districts would be connected in coming days.

Zelensky has issued constant warnings to consumers to conserve power, as have utility officials.

Sergey Kovalenko, chief operating officer of YASNO, which provides energy to Kyiv, said on Saturday evening the situation in the city has improved but remained “quite difficult.”

Zelensky criticized Kyiv’s Mayor Vitali Klitschko, saying he had not done enough to help beleaguered residents. Klitschko, a former professional boxer, hit back at Zelensky, saying the criticism was out of place amid Russia’s military campaign.

“That is senseless,” Klitschko said.