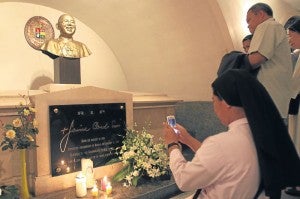 FACE VALUE A nun takes a photograph of the tomb of Jaime Cardinal Sin at Manila Cathedral on Tuesday topped by the bust of one of the most recognizable faces in the country’s recent history. The influential Roman Catholic archbishop played a key role in the People Power Revolution that toppled the regime of the dictator Ferdinand Marcos in 1986. Sin died on June 21, 2005, at the age of 76. NIÑO JESUS ORBETA

They finally made up for their past Sins.

The Archdiocese of Manila on Tuesday unveiled a bronze bust of its late Archbishop Jaime Cardinal Sin, considered as the closest copy of the charismatic Church leader after earlier depictions left most viewers unimpressed.

It was the fifth bust to be installed on Sin’s tomb inside the Manila Cathedral’s burial chamber—and it took a little-known Chinese sculptor to render the late prelate’s portly features with considerable accuracy.

Shi Yanmin (Jude Shi), a Catholic residing in a village near Beijing, personally delivered his work on Monday night, according to Fr. Rufino Sescon, who had served as Sin’s private secretary.

Shi’s creation captures Sin’s round, slit-eyed, bespectacled face, with the teeth showing as it breaks into a smile.

Sin’s own gold-rimmed glasses had to be used during the unveiling on Tuesday because the replica broke while Shi was en route to Manila the other day.

“The bust got the nod of the cardinal’s family and relatives. They are happy about it,” Sescon told reporters in an interview following a Mass marking Sin’s sixth death anniversary. The memorial service was attended by Sin’s relatives, students and employees of the archdiocese.

Sin passed away at age 76 on June 21, 2005, due to kidney complications arising from diabetes.

Sescon disclosed that the previous four busts, created by local artists including sculptor Ed Castrillo, had to be replaced because they barely resembled the man being honored.

The last bust prior to Shi’s work would be moved to the Lorenzo Mission Institute that was founded by Sin at San Carlos Seminary in Guadalupe Viejo, Makati City, the priest said.

The other earlier sculptures by Castrillo and National Artist Napoleon Abueva would be placed in a proposed museum in New Washington in Aklan province, Sin’s hometown, Sescon added.

“After what happened in February, we started looking for an artist who can produce a close resemblance of the cardinal,” Sescon said.

Sescon was apparently referring to the public’s general reaction to the 15-foot bronze statue of Sin that was unveiled on Roxas Boulevard in Manila to mark the 25th anniversary of the Edsa 1986 Revolution, of which Sin was a key player.

The full-body figure, which was also done by Castrillo, showed Sin in stiff, unadorned robes and with his right hand raised in the act of giving a blessing.

Observers, however, then thought that the statue barely looked like Sin, one of the most recognizable figures in Philippine history.

“We have tried Abueva, Castrillo and other local artists, [and] so we tried our luck with a foreigner, a Chinese, since the Cardinal is also of Chinese ancestry,” Sescon said.

“Of all the statues and busts, this closely resembled Cardinal Sin,” he said, referring to Shi’s version.

In a historic radio broadcast in February 1986, Sin called on Filipinos to flock to Edsa and form a human shield around two neighboring camps occupied by a group of military defectors from the Marcos dictatorship.

Sin’s crucial role in the bloodless, four-day revolution cemented his stature as an icon of Philippine democracy, along with the late President Cory Aquino who assumed power after the fall of Marcos.

In his homily on Tuesday, Lingayen-Dagupan Archbishop Socrates Villegas likened Sin to “a good hinge.”

“When we were afraid, we knew we could go to him and our fears would disappear. He would make us laugh, he would assure us that Our Lady is with us and there’s nothing to fear,” said Villegas, who was Sin’s protégé and confidante.

Not a silent bishop

“Like a good hinge, he kept us secure … [and] that familiar voice we heard on Radyo Veritas in 1986 was the voice of a shepherd whom we know will never mislead us, whom we know will always take care of us,” Villegas added.

Sin could not be considered a silent bishop, Villegas noted, for the late cardinal spoke and took action at the “right time” for the sake of his flock.

“Because sometimes by keeping quiet too long and too much, we can do harm to the people of God,” Villegas said.