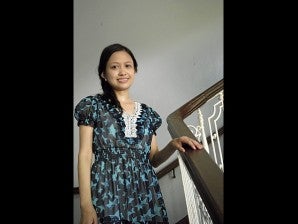 ILOILO CITY—There were days when her joints would be so painful and swollen, and the colors of her fingers would turn violet, grey or white.

Ruthell Moreno would then slow down so the disease would not cost her life.

Aside from graduating on the top and delivering the valedictory address, Ruthell received several awards, including Most Outstanding Student Teacher, Student of the Year, Proficiency in Special Education, Academic Excellence, one from the Philippine Association for Teacher Education, Journalism, Rotary and the Abelardo Alegre Ledesma Award for Excellence in Culture and the Arts.

Ruthell’s feat stands out because she has reached a level of excellence despite being afflicted with lupus.

“There are times when I can’t go to school because of the pain, but I still insist on going to school. I give a lot of importance to education,” she said.

Lupus is one of many disorders of the immune system known as autoimmune diseases, says the National Institute of Arthritis and Musculoskeletal and Skin Diseases (http://www.niams.nih.gov). It says “the immune system turns against parts of the body it is designed to protect, leading to inflammation and damage to various body tissues.”

“Lupus is systemic so you never know when your kidneys, brains or other organs will be affected. Every morning I wake up, I am very thankful that I am alive, that I can feel the pain,” Ruthell said.

She was first diagnosed with SLE on July 30, 2007, two days after she attended her capping ceremonies at WVSU’s College of Nursing when she was a junior student.

The demands of being a student nurse had taken its toll on this elementary and high school valedictorian and school paper editor in chief that she had to shift to a course that was less physically demanding.

Being at the top of her nursing class then and to be diagnosed with lupus was a turning point in her life.

But Ruthell’s passion for academic excellence never left her even as she struggled daily with variations of extreme fatigue and skin rashes. So sensitive was she that she needed to use an umbrella daily and a sun block even at night.

Her mother, Laurita Moreno, a day care teacher of Barangay San Fernando in San Jose, said Ruthell refused any form of assistance. She said Ruthell insisted on going to school, reasoning out that she would end up poor if she stopped schooling.

Laurita was named Most Outstanding Day Care Worker in 1995 and 2003 by Antique and the Department of Social Welfare and Development in the province.

She used to feed her children with flame-cooked mongo beans and heads of dried fish that were then milled to powder consistency and mixed with milk.

“I had no job then and my husband was starting out as a policeman. We were so poor, I had to think of ways of giving nutritious food to my kids,” she said.

A year after being diagnosed with SLE, Ruthell and her physician, Dr. Caroline Arroyo, founded the Lupus Support Group of Panay  Inc. that was registered with the Securities and Exchange Commission last Dec. 12, 2008. Ruthell was president and the youngest of the officers.

The group meets quarterly. Ruthell would invite physicians and other health professionals to lecture on the impact of lupus on the body and the medications that could give comfort.

Although lupus remains incurable, it does not deter Ruthell’s spirit. “What I am now is God’s gift to me and what I will be is my own gift to God.”