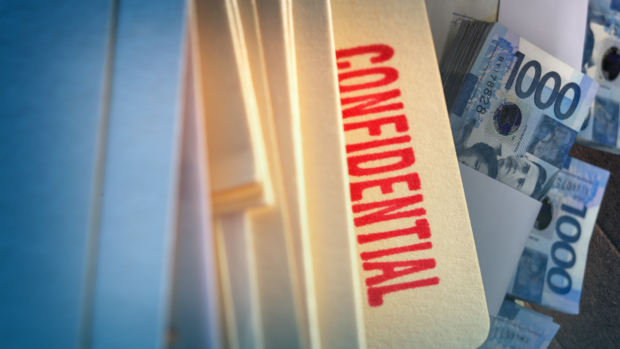 MANILA, Philippines—While confidential and intelligence funds (CIF) are “shrouded in mystery,” some government agencies, even those that are not responsible for national security or law enforcement are still receiving billions of pesos worth of such funds.

Back in 2021, the Office of the President (OP), which was still led then by President Rodrigo Duterte, was given P4.5 billion in CIF, all of which were spent on confidential and intelligence expenses.

The Commission on Audit (COA) had said the OP accounted for 49.55 percent of the P9.082 billion in total CIF spending last year. It was slightly lower than the P4.636 billion that the office spent in 2020.

A total of P1.9 billion was likewise spent by the Department of National Defense (DND), while the Department of Interior and Local Government (DILG) spent P908.4 million for confidential and intelligence expenses.

But last month, Albay Rep. Edcel Lagman said the problem is that the use of CIF is “shrouded in mystery and the supposed audit by the COA could not be disclosed to the Congress and the public.”

Lagman, who is now president of the Liberal Party, stressed that because of this, CIF “breed[s] corruption, and the more enormous the funds are, the greater the magnitude is for the possibility of graft.” 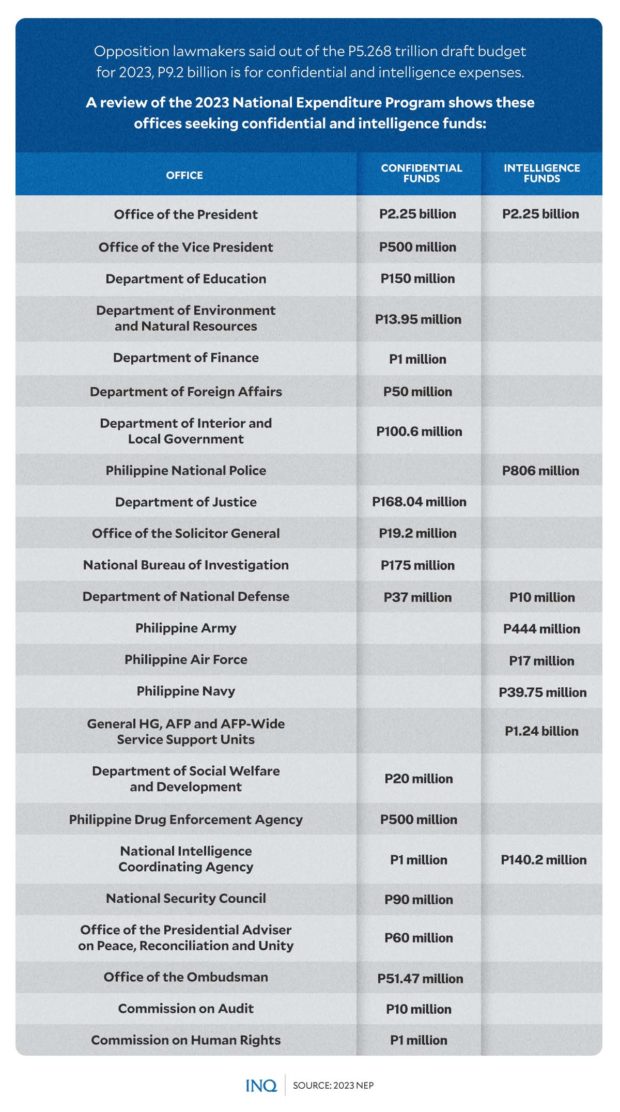 This was the reason that this year, he and some opposition lawmakers, like Senate Minority Leader Aquilino Pimentel III and Sen. Risa Hontiveros had been calling on Congress to scrap the excessive CIF in the P5.268 trillion proposed 2023 budget.

Lagman said the government asked for P9.2 billion in CIF for next year, including the P4.5 billion and P500 million allocated to the OP and the Office of the Vice President (OVP).

The Department of Education (DepEd), which is likewise headed by Vice President Sara Duterte, was set to receive P150 million in CIF, as reflected in the National Expenditure Program (NEP) for next year.

As stressed by Pimentel, they hoped colleagues would vote against the CIF of agencies that are not responsible for national security or law enforcement, saying that there is “mounting public pressure” against these.

But the OVP explained that its CIF would be according to parameters set by the Department of Budget and Management (DBM) and the COA through Joint Circular No. 2015-01, or the guidelines on the use of CIF.

Likewise, the DepEd said confidential expenses are allowed for all civilian agencies: “The threats to the learning environment, safety, and security of DepEd personnel are interlocking with the mandate of support to the national security of civilian offices.” 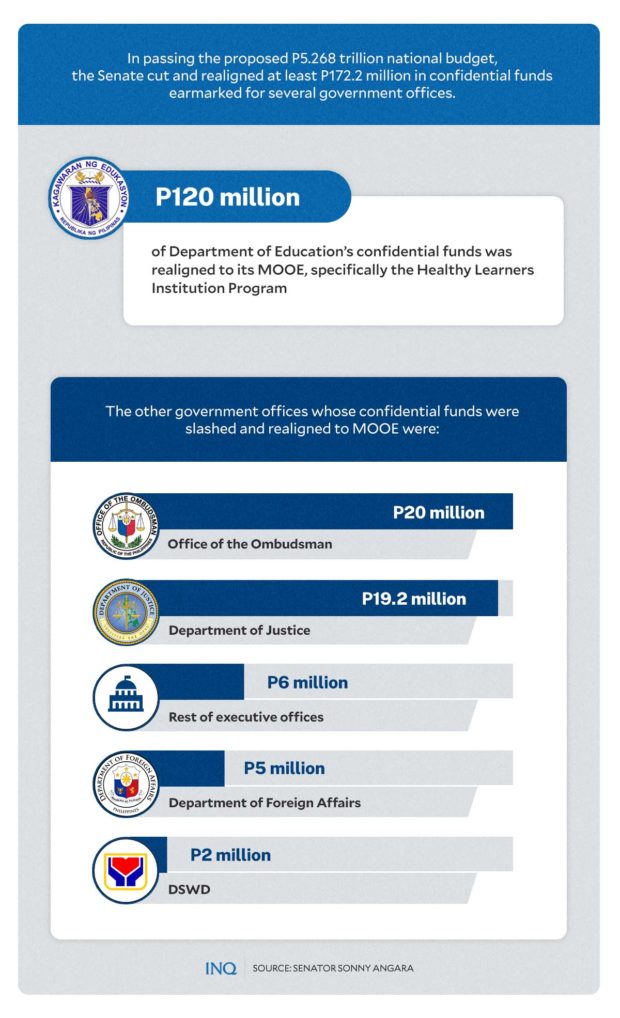 But as the Senate approved on final reading the P5.268 trillion proposed 2023 budget, some of the confidential funds had been slashed, with Sen. Sonny Angara, who sponsored the bill, saying that “we listened.”

As a result, a total of P172.2 million in CIF had been realigned to maintenance and other operating expenses (MOOE) of the government agencies whose funds had been cut: “We listened to the thoughts of our colleagues on critical issues.”

Angara said most of the P172.2 million came from the P150 million in proposed confidential funds of the DepEd as Sen. Risa Hontiveros moved to have P120 million realigned to the Healthy Learners Institution Program.

The rest of the agencies whose confidential funds had been slashed and realigned were the DFA (P5 million), DOJ (19.2 million), DSWD (P2 million), Office of the Ombudsman (P20 million), and the rest of the executive offices with such funds (P6 million).

“All [realignment are] within the agency because we did not want to deprive the agencies of their budgets but placed [them] under maintenance and other operating expenses,” Angara said.

Initially, the DepEd’s P100 million in confidential funds was supposed to be realigned to the OVP’s MOOE, but Hontiveros moved to transfer it back to the DepEd. Her motion was accepted by Angara.

Then she asked to realign the remaining P50 million to support the Healthy Learners Institution Program, but Angara compromised and said P20 million will be realigned to the program, leaving the DepEd with only P30 million in confidential funds.

Hontiveros and Pimentel also moved to require the DepEd and the rest of the agencies with confidential funds to prepare and submit a work plan on their use of the funds to the House of Representatives and the Senate.

Congress on a ‘slippery slope’

Terry Ridon, a public investment analyst, told INQUIRER.net that “to be clear, these cuts are no more than a quarter measure to appease public sentiment on confidential and intelligence funds.”

“This even puts the legislature on a slippery slope: If it can cut some portions of CIF in agencies that never had these funds in the first place, what stops them from removing all of it?” he said.

Ridon, who is likewise the convenor of InfraWatch PH, stressed that “it would have been best to have converted the entirety of CIF to specific line-items in agencies that truly needed more funding such as social services, housing, education, or infrastructure.”

“Converting CIF to MOOE maintains the funds’ status as an agency kitty but with more accountability than CIF. Given our limited fiscal space, agencies that need more funding to expand their services and mandates should have received this reallocation.”

As stated in Joint Circular No. 2015-01, “to strengthen accountability,” all heads of office of government agencies, local government units and government-owned and controlled corporations (GOCCs), which receive and spend CIF, shall submit Quarterly Accomplishment Reports. 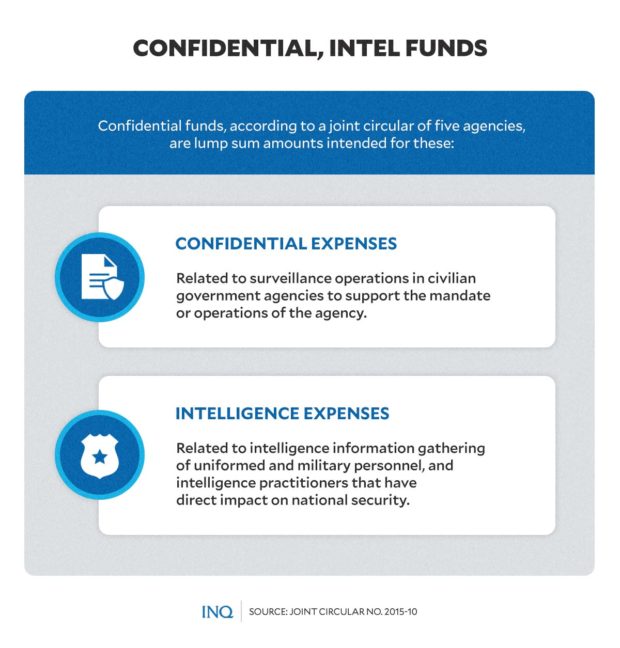 “With due regard for the protection from unauthorized disclosure of classified information relating to sensitive, confidential and intelligence matters, these procedures shall be observed”:

The circular likewise stated that agencies are mandated to prepare a physical and financial plan supporting their request for CIF, containing the estimated amount per project, activity and program.

But as stressed by Antonio Montalvan II, a social anthropologist and university professor, in a column for Vera Files, “COA cannot audit the final report because no liquidation is required.”

“It merely accepts a general report of how the money was used. It cannot release that report to the public because of its ‘confidential’ nature,” he said, stressing that “there is no oversight.”

Confidential expenses are those that are related to surveillance activities in civilian government agencies that are intended to support the mandate or operations of the agency.

Intelligence expenses, meanwhile, are those that are related to intelligence information gathering activities of uniformed and military personnel, and Intelligence Practitioners (IPs) that have direct impact on national security. 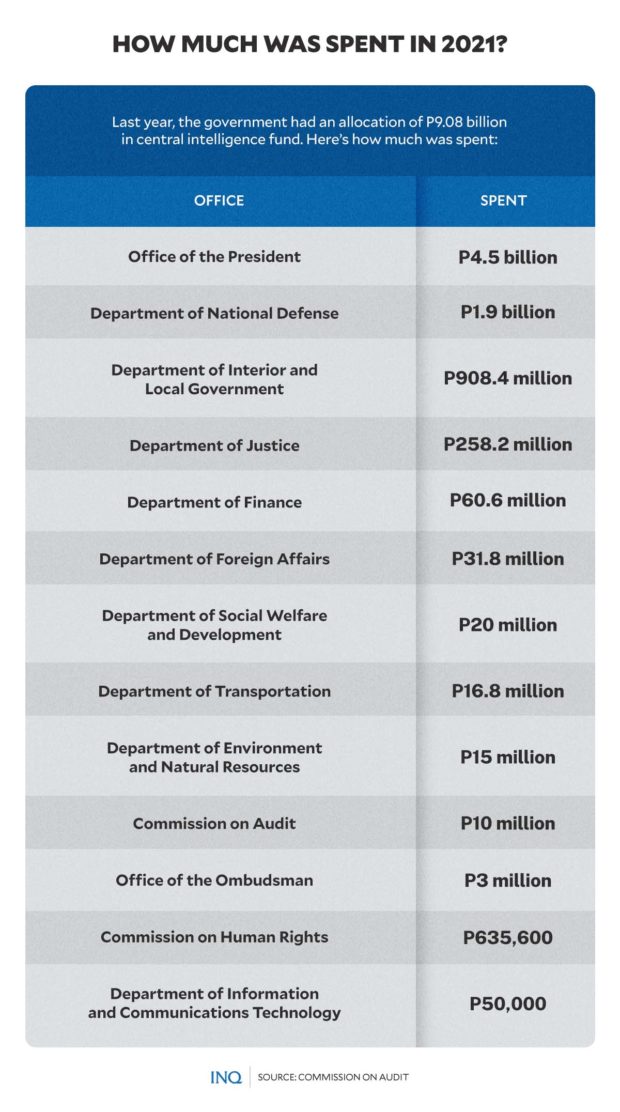 Intelligence funds, meanwhile, shall be used only on the following “Intelligence Expenses” carried out by uniformed and military personnel, and IPs:

The circular stated that in no case shall CIF be used for these:

As stressed by Ridon, “we have no objections that agencies in the security sector may require CIF, and certainly the Office of the President may require some levels of CIF.”

“These funds could have been better used in very specific appropriations in various agencies focused on uplifting marginalized families,” he said.

Your subscription could not be saved. Please try again.
Your subscription has been successful.
Read Next
Grab PH, Move It shoved aside gov’t order by pushing through with acquisition – solon
EDITORS' PICK
vivo Philippines offers a free bouquet of flowers and a premium necklace perfect for Valentine’s Day
Only 38% of students grade 1 to 3 prefer local language as medium of instruction — Pulse Asia
ACT slams Edca on 124th anniversary of PH-American war: ‘Tila hindi umalis ang mananakop’
Omega Speedmaster super racing: Tiny device massive change
House energy committee chair Arroyo bats for cheap electricity
Philippines central bank to focus on inflation at next policy meeting – governor
MOST READ
Pokwang admits she lied about cause of split with Lee O’Brian: ‘Umasa akong aayusin pa niya’
Philippines’ own ‘Anna Delvey’ arrested in Taguig City
OWWA chief Arnell Ignacio: Socmed manager behind post on my love life
Vice Ganda asserts all is well with Karylle, takes swipe at ‘kuya’ who chimed in to be ‘trending’
Don't miss out on the latest news and information.