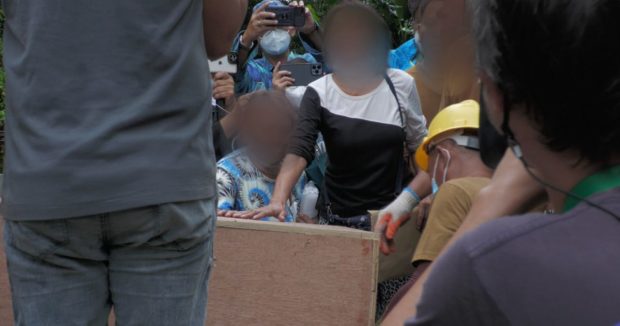 Emotional reunion for siblings as their youngest brother whom they have not seen for 10 years is among the 60 Bilibid inmates interred Friday at the New Bilibid Prison Cemetery. Noy Morcoso/INQUIRER.net

MANILA, Philippines — It’s been an entire decade since she last saw her brother. The anguish of wondering what became of him followed her anywhere she went. Even if it’s just his corpse, she wanted to see him one more time.

“Sandali baka pwede buksan! Baka pwede ko sya makita ngayon lang,” the sister came racing, calling out  the name of her brother. He was  one of the 60 persons deprived of liberty (PDLs) interred Friday at the New Bilibid Prison (NBP) Cemetery.

But her wishes were denied, and her unspoken final words to her brother were locked away in the casket.

Though heartbroken, she clung to the belief that her brother would recognize her pain.

(We only borrowed money so we could pay for our fare to come here. But, at least they [Bureau of Corrections] fulfilled their promise to include my brother in this batch for internment.)

The sister is from Manila, while their other siblings and 80-year-old mother are from Fairview in Quezon City.

“Masayahin ‘yan, bakla ‘yan. Sanay na kami na lagi s’yang wala. May tiwala kami sa kanya (He is carefree. He is gay. We’re so used to him being away. We have faith in him though),” her sister described her 46-year-old beautician brother.

“Sampung taon ko syang hindi nakita. Ang alam ko sa Palawan at LaUnion s’ya bumibiyahe  (It had been 10 years since I last saw him. From what I know, he often visits Palawan and La Union),” she said.

She said she didn’t find out about her brother’s death until last October when she received a note from the Bureau of Corrections (BuCor) confirming her worst fears.

Before his death, the inmate was transferred to the NBP in 2020 after being convicted of violating the Comprehensive Dangerous Drugs Act.

“Drugs daw. Ito nga ang binigay nila sa akin, tapos nasa record dead on arrival sa ospital (They said it was drugs. They gave this to me, then the record stated dead on arrival in the hospital).”

When asked if they would take any legal action for what happened to her brother, she said: “Ano magagawa namin? Hindi naman kami papansinin kasi wala kaming pera. Ang pakiusap ko lang mailibing s’ya dito (What can we do? We don’t have enough money to draw their attention even if we did. The only thing I’m asking is that he be laid to rest here).”

No other relatives came for the other 59 inmates.

Although the Directorate for Health and Welfare Service tries to notify family members, Dr. Maria Cecilia Villanueva said they rarely hear from anyone. Even if there were, she added, it would often only be for a death certificate.

“They will leave the body to us because they cannot afford to ferry the body of their relatives to their provinces,” she said.

Villanueva appreciated the initiatives of BuCor officer-in-charge Gregorio Catapang Jr. to speed up the burial procedure.