Bicam to consolidate amendments from Senate, House in proposed 2023 budget 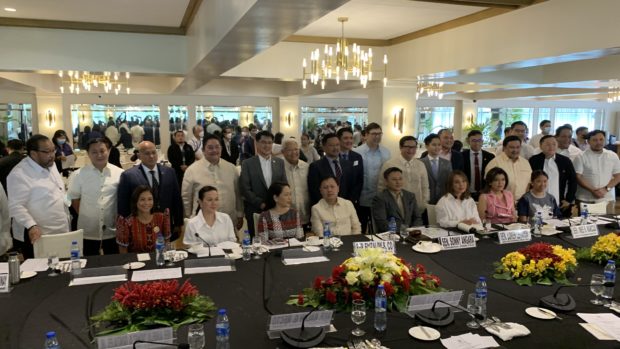 Lawmakers from both the Senate and the House assemble at the Manila Golf and Country Club on Friday to convene the Bicameral Conference Committee that would tackle the proposed 2023 national budget. The committee is tasked to consolidate the House and Senate’s own versions, amid possible differences in adjustments and realignments. (Photo by Gabriel P. Lalu/ INQUIRER.net)

MANILA, Philippines — The Bicameral Conference Committee will face the huge task of combining the two versions of the proposed 2023 national budget, as the Senate made amendments worth P215 billion for programmed allocations and the House of Representatives moved around P77 billion.

In an interview after the bicameral conference committee started deliberating the proposed P5.268 trillion budget on Friday, Senator Sonny Angara and Marikina 2nd District Rep. Stella Quimbo confirmed the adjustments in the Senate and the House’s own versions of the General Appropriations Bill (GAB).

“[…] Mayroong mga disagreeing provisions and I believe amounting to about P215 billion worth of increases in budget items,” Quimbo told reporters.

(There are disagreeing provisions, amounting to about P215 billion worth of increases in budget items.)

Angara also confirmed that this is different from the P77 billion amendments made by the House.

“Nasa gano’n, mga (It’s around) P200 billion […] Yes,” Angara added, after being asked if the over P200 billion amendments by the Senate differs from the one made by the House.

In a follow-up interview, Quimbo confirmed to House reporters that the P215 billion adjustments made by the Senate may or may not include the House’s P77 billion changes, adding that the bicameral conference committee would thresh out these matters.

Despite the differences, Quimbo remains confident that the two chambers of Congress can quickly combine the two GAB versions because of the Medium Term Fiscal Framework (MTFF).

The MTFF is a fiscal framework set by President Ferdinand Marcos Jr.’s economic managers, which indicates the administration’s policy direction for the duration of the Chief Executive’s term.

(I think the House and the Senate can quickly agree on things because we have, for the first time, adopted a Medium Term Fiscal Framework that contains the eight-point socio-economic agenda of the President.)

(So these would be the guiding posts of the House and Senate, and in the end, what we would pass would be the best budget proposal that supports this agenda.)

Angara also admitted that the lapses in the budget realignments might be due to some Senators basing their proposed amendments on the National Expenditures Program (NEP) sent in by the executive and not the GAB approved by the House.

(Of course, we cannot avoid that, there are times when the basis of amendments suggested by Senators is the NEP, they do not know that sometimes, that item was already changed in the General Appropriations Bill, which means we need to discuss these amendments.)

Meanwhile, Angara also revealed that among the things discussed initially in the bicam is the intelligence fund allocations to several government offices — with Senator Risa Hontiveros moving that the changes made by the Senate regarding the confidential and intelligence funds be kept.

(Yes, because vice chair Hontiveros already asked that the amendments by the Senate, where we realigned some hundred million funds from the intelligence funds of different agencies — we did not remove the funds from the agency, we only allocated these to their MOOE or the Maintenance and Other Operating Expenses.)

Earlier, officials from both the House and the Senate expressed confidence that the proposed 2023 national budget would be ratified and signed into law before Christmas, with Angara stressing the need to sustain the momentum of early submissions by the executive and the House.