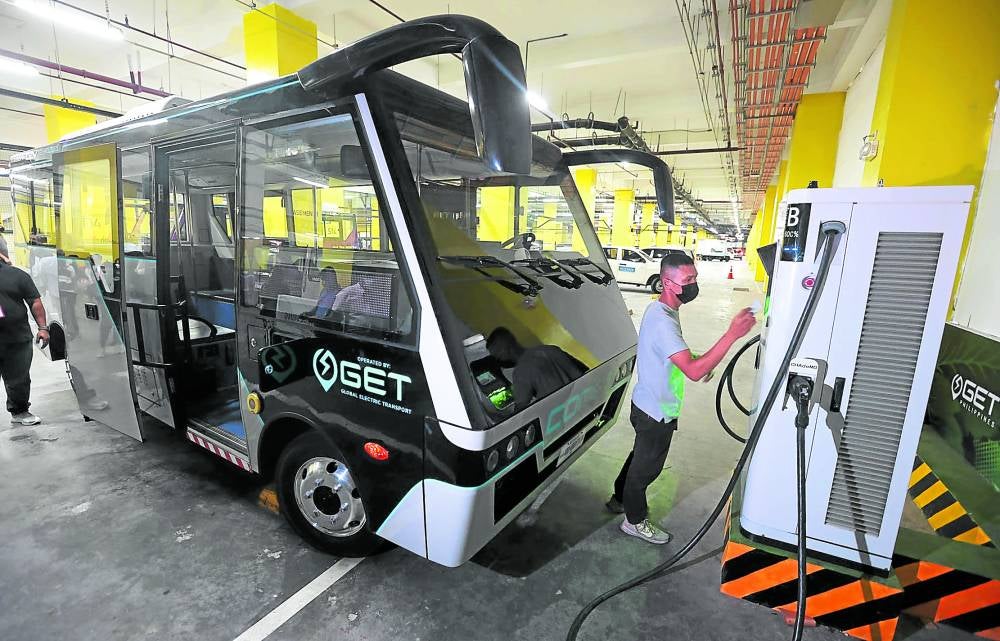 ENVIRONMENT-FRIENDLY TRANSPORT More electric vehicles, such as this 30-seater Comet minibus, recharging at a station in this file photo taken on March 29, are expected to come once the tariff cuts take effect. The government is promoting e-vehicles to curb dependence on imported fuel and address pollution issues, says Socioeconomic Planning Secretary Arsenio Balisacan. —MARIANNE BERMUDEZ

President Ferdinand Marcos Jr. has agreed to temporarily remove the tariff on imported electric vehicles (EVs) and lower the tax rate on their parts and components to promote usage and help cut the country’s dependence on imported fuel, Socioeconomic Planning Secretary Arsenio Balisacan said on Thursday.

An executive order to implement the tariff modification as approved by the National Economic and Development Authority (Neda) Board, which is chaired by the President, is now awaiting Mr. Marcos’ signature, Balisacan said at a Palace briefing.

Under the EO, tariff rates on certain EVs, such as passenger cars, buses, minibuses, vans, trucks, motorcycles, tricycles, scooters and bicycles would be cut to zero for a five-year period. Tariffs on certain EV parts and components would also be lowered to 1 percent from 5 percent also for five years.

Balisacan, who heads Neda, said the zero import tariff on EVs would not apply to hybrid-type EVs, or those that give users the option to use fuel or electricity.

“In particular, the EO will temporarily reduce the most-favored nation (MFN) tariff rates to zero percent for five years on completely built-up, or CBU, units of some EVs, except for hybrid-type EVs,” he said.

The Neda Board also indicated that the tariff modification would be reviewed after a year of implementation to assess its impact on the development of the EV industry ecosystem, he added.

The EO, according to Balisacan, would help broaden the list of countries that can supply EVs to the Philippines and encourage consumers to shift to electric-run vehicles and promote the growth of the domestic industry.

“We want to encourage the adoption, the use of e-vehicles because that will address pollution issues and, of course, adaptations to climate change; and we believe that’s the future. But more importantly, we want to be part of the value chain globally in this drive to get to these new industries, new growth drivers. And hopefully, we can develop our own industries, and this reduction in tariff is part of that building up of the ecosystem,” he said.

The tariff reduction on EVs followed the lapsing into law last April 15 of Republic Act No. 11697, or the Electric Vehicle Industry Development Act, which laid the policy framework for the manufacture, assembly, and importation of these vehicles and their parts and components; construction, installation and maintenance of charging stations and related support infrastructure; research and development, and regulation of the sector.

E-vehicle producers that would set up shop in the country and other auxiliary businesses related to EVs could also avail themselves of other tax incentives and fiscal perks from the Department of Trade and Industry, according to Balisacan.

The EV manufacturing industry has been included in the government’s Strategic Investment Priority Plan, which means manufacturers can get fiscal incentives, such as income tax holiday of up to seven years.

Current tariffs on e-vehicle imports are between 5 percent and 30 percent, depending on whether the vehicles come from MFN and free trade agreement (FTA) partner countries or not.

In July, Trade Secretary Alfredo Pascual noted that eliminating tariffs would help the country’s EV industry develop an ecosystem for a viable market that could support the production of EVs here.

For instance, he said such move would put Italian EV makers on a level playing field alongside the country’s FTA partners that enjoy lower tariff rates.

Asked if the government would not lose money from the tariff reduction, Balisacan replied: “No, because we have really been reducing the tariffs for those vehicles that are not actually yet locally produced. And as of now, the quantity of those [EVs] is not that big. We want to encourage the adoption of EVs that will eventually increase the demand for support systems like chargers. It can even develop value-adding services for our industry.”

The government decision to cut tariffs has “a great effect on the promotion of EV use, and we need that to verify which vehicle segment we need to concentrate on and ultimately assemble locally. Five years is a good time to test the market,” said Evap chair emeritus Ferdinand Raquelsantos.

“Definitely, the Philippines is a viable market for EVs,” he stressed.

Evap president Edmund Araga added: “It is a great opportunity for the industry to flood the market with more types and models of (CBU) EV units to help promote the industry. We at Evap already made a bold statement that switching to EVs will be beneficial, not only to our environment and our health, but this would also help us save on fuel imports.”

“More and more EV charging stations are now ready for use, in malls, gas stations and hotels,” he added. The total number of stations as of July 2021 was 278, mostly located in Luzon.

Raquelsantos, who is also the president of the Electric Vehicle Owners Society, described the country’s EV infrastructure as “fast growing.”