Kremlin says has faith in ‘success’ of Ukraine offensive 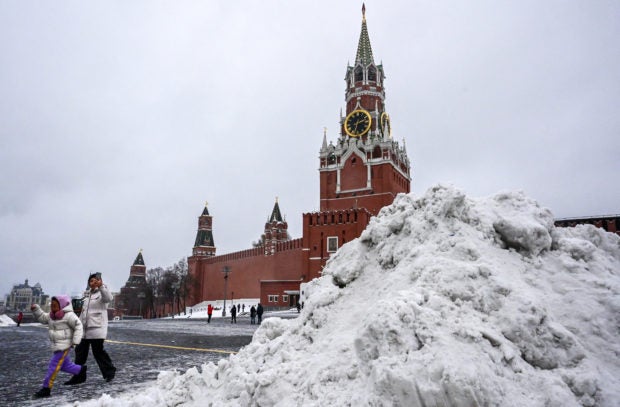 Children walk past a snow heap after a snowfall in front of the Spasskaya tower of the Kremlin at the Red Square in Moscow, on November 22, 2022. AFP

YEREVAN, Armenia — The Kremlin said Wednesday it had faith in the “success” of its offensive in Ukraine, as Russian strikes have left the ex-Soviet country’s energy system in tatters.

“The future and the success of the special operation are beyond doubt,” Kremlin spokesman Dmitry Peskov said on a visit to Armenia, using the official Moscow term to describe Russia’s assault.

Peskov, who accompanied President Vladimir Putin to the Armenian capital Yerevan, did not provide further details.

He spoke to reporters as Ukrainian President Volodymyr Zelensky was set to address an urgent meeting of the UN Security Council later Wednesday and after the European Parliament recognized Russia as a “state sponsor of terrorism”.

Peskov did not address the symbolic political step of the European legislators.

But Russian foreign ministry spokeswoman Maria Zakharova earlier in the day said on messaging app Telegram: “I propose designating the European Parliament as a sponsor of idiocy.”

Russia vows to respond to greater Western involvement in Ukraine