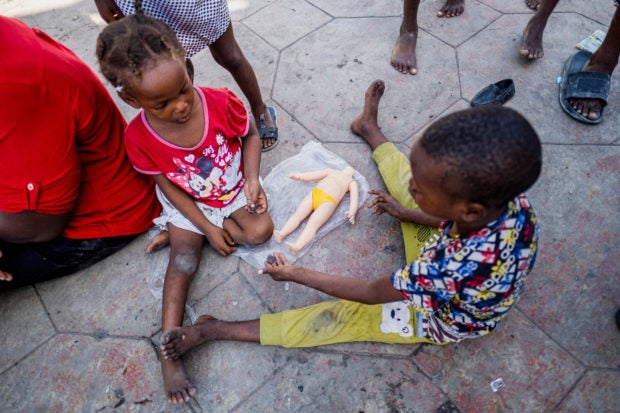 Children play with a broken doll at the Hugo Chavez Square where they shelter from gang war violence in Port-au-Prince, Haiti October 16, 2022. REUTERS FILE PHOTO

Some two in five of Haiti’s growing number of cholera cases are among children, the United Nation’s children’s agency warned on Wednesday, saying youth suffering from severe malnutrition ran three times the risk of dying from the bacterial disease.

Haiti, the poorest country in the Americas, has suffered a series of disasters in recent years, including a presidential assassination last year followed by a massive earthquake.

Cholera remerged in the Caribbean island nation early October after around three years without reported cases, amid shortages of food and clean drinking water triggered by a gang blockade of its main fuel port.

“I was shocked to see many children at risk of dying in the cholera treatment centers,” Unicef emergency program director Manuel Fontaine said in a statement following a four-day visit to Haiti, which shares the island of Hispaniola with the Dominican Republic.

Fontaine pointed to a “triple threat” of malnutrition, cholera and armed violence, the first two a “lethal combination, one leading to the other.”

Usually spread through contaminated water, cholera causes diarrhea and vomiting and killed some 10,000 people in a 2010 outbreak that has been blamed on a U.N. peacekeeping force.

The disease affects both children and adults and can kill within hours if untreated.

Though life-saving treatment is simple and affordable, Fontaine said it was hard to access areas of the capital: “Amid widespread armed violence and insecurity in large parts of the capital, humanitarian teams are walking on eggshells.”

The Pan-American Health Organization this week reported 216 deaths from the disease, 961 confirmed cases and a further 12,016 suspected ones, largely around the capital Port-au-Prince.

It also confirmed a second imported case in the Dominican Republic, a 4-year-old boy from Port-au-Prince.

For struggling Haiti, return of cholera is a ‘catastrophe’