Pampanga board asks LTO to deputize cops for traffic duties 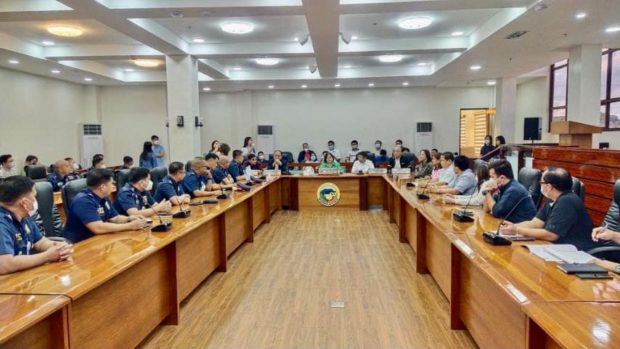 The Pampanga provincial board led by Vice Gov. Lilia Pineda meets with officials of different government agencies to find solutions to the worsening traffic situation in the province. (Photo courtesy of the Pampanga government)

MABALACAT CITY, Pampanga — The provincial board has asked the Land Transportation Office (LTO) to deputize the police to arrest erring motorists who contribute to the worsening traffic condition in the province.

The provincial board, led by Vice Gov. Lilia Pineda, met Tuesday with officials of LTO Region 3, the Department of Public Works and Highways (DPWH), Police Regional Office 3, and the Department of the Interior and Local Government to discuss solutions to traffic congestion.

The provincial government said in a statement Wednesday that Pineda had asked the LTO regional office to deputize the Pampanga police to accost traffic violators, including those who park their vehicles in areas that hamper the free flow of traffic.

The growing number of private vehicles on the road, DPWH projects, illegal parking, and defective traffic lights cause traffic congestion, the provincial board found out during its session.

The LTO has agreed in principle to deputize the Pampanga police, while DPWH officials said they would install signages to guide motorists and public utility drivers along construction areas. Pineda said the free flow of vehicles along major roads is necessary for the convenience of everyone, especially during the Christmas holidays. INQ