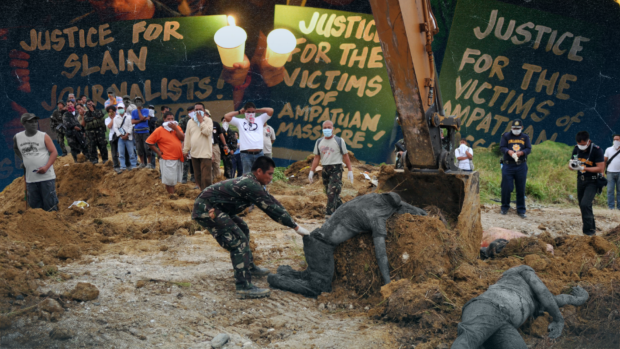 MANILA, Philippines—When news broke that 58 individuals had been massacred in the town of Ampatuan, Maguindanao province in 2009, then 29-year-old Rowella Dayawan got worried calls from her relatives, asking where she was.

Two of the bodies of the victims found on a hilltop on Nov. 23 that year were those of women said to be pregnant so the relatives of Dayawan, who was also pregnant with her youngest, thought one of the victims was her.

Little did they know that she already gave birth on Nov. 13—the reason that Dayawan, a journalist based in Maguindanao, was unable to cover the filing of certificate of candidacy of Esmael Mangudadatu, then vice mayor of Buluan town also in Maguindanao, for governor of the province. 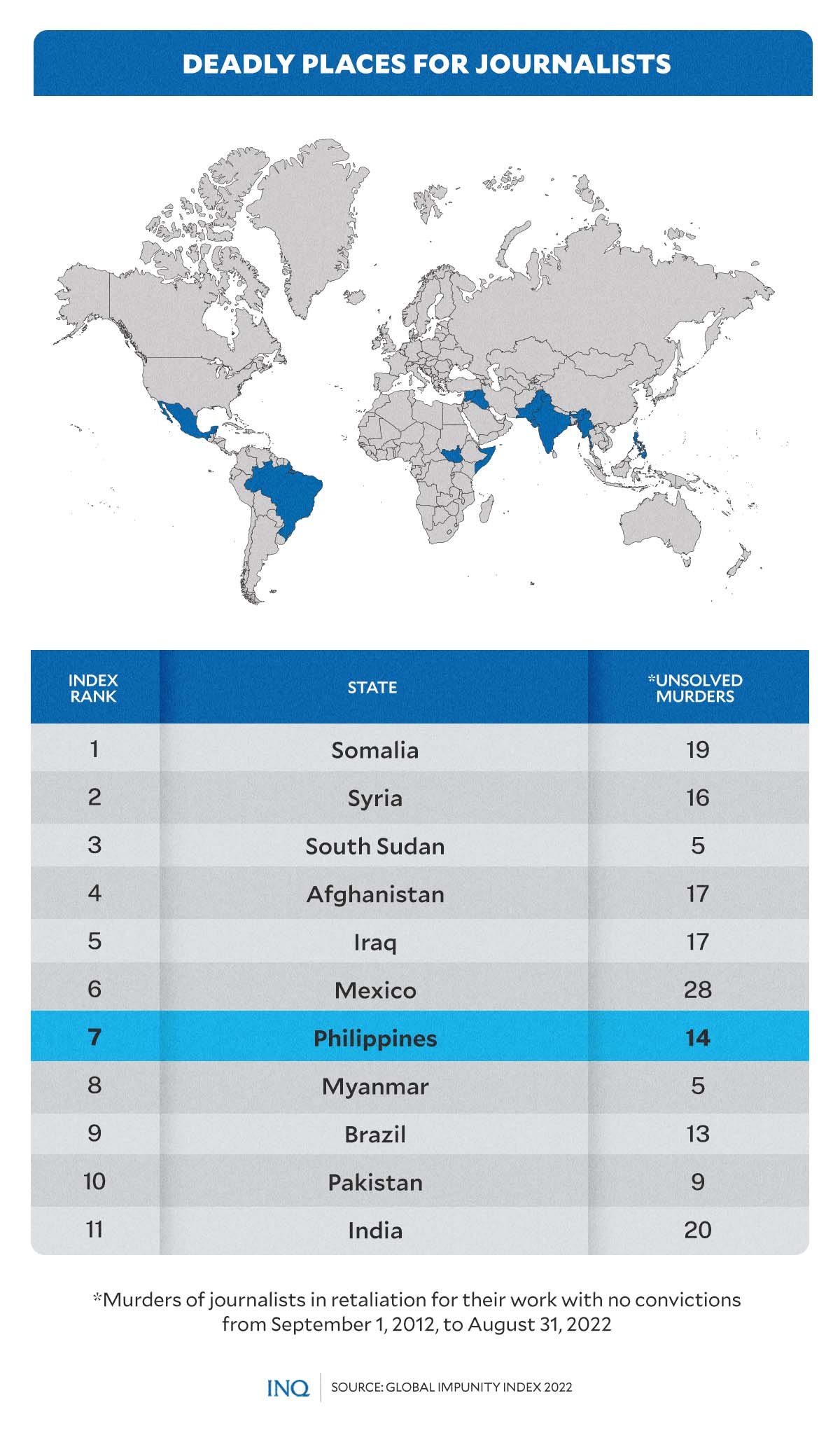 Dayawan said two months before the mass murder, considered to be the worst election-related violence in the Philippines, Mangudadatu had already publicly declared what was then considered to be unthinkable—that he would fight the powerful Ampatuan clan at the polls.

“That moment, I told myself that there will be trouble [in the next days] because knowing the Ampatuan[s] that time, they are so powerful. Whoever will challenge them will have difficult days ahead,” she told INQUIRER.net.

But despite being aware of the danger, Dayawan said she would still have covered the relatives of Mangudadatu, who were filing the COC on his behalf, if her giving birth came at a later date.

Then on Nov. 23, 2009, when 57 dead bodies were discovered on a hilltop, “I was resting in my room when everyone was calling. They were asking who were the individuals in the convoy and if I was still alive.”

The “single deadliest attack on media,” the massacre ended the lives of 32 journalists, mostly from General Santos City and Koronadal City, who were part of the convoy that was headed to a Commission on Elections (Comelec) office in Shariff Aguak town.

But the 32nd journalist killed—Reynaldo Momay—is not yet recognized by the court as a victim since his body has yet to be found. The National Union of Journalists of the Philippines is still fighting for his recognition through the online campaign #FightFor58.

Victims did not die in vain

While fate spared Dayawan, she said she decided to continue her work as a journalist despite fears for her safety to honor her slain colleagues.

This, as she stressed that “our role is for the truth,” saying that journalists, as “watchdogs,” should serve the Filipino people by reporting on government wrongdoing.

Dayawan is now in her 21st year as a broadcast reporter and is still covering the province which had already been split into two—Maguindanao del Norte and Maguindanao del Sur—by a law that was ratified this year.

But even until now, 13 years since the mass murder, she said journalists are still unsafe: “Here in Maguindanao, if you are too critical of the wrongdoings of those in power, your life is threatened.” 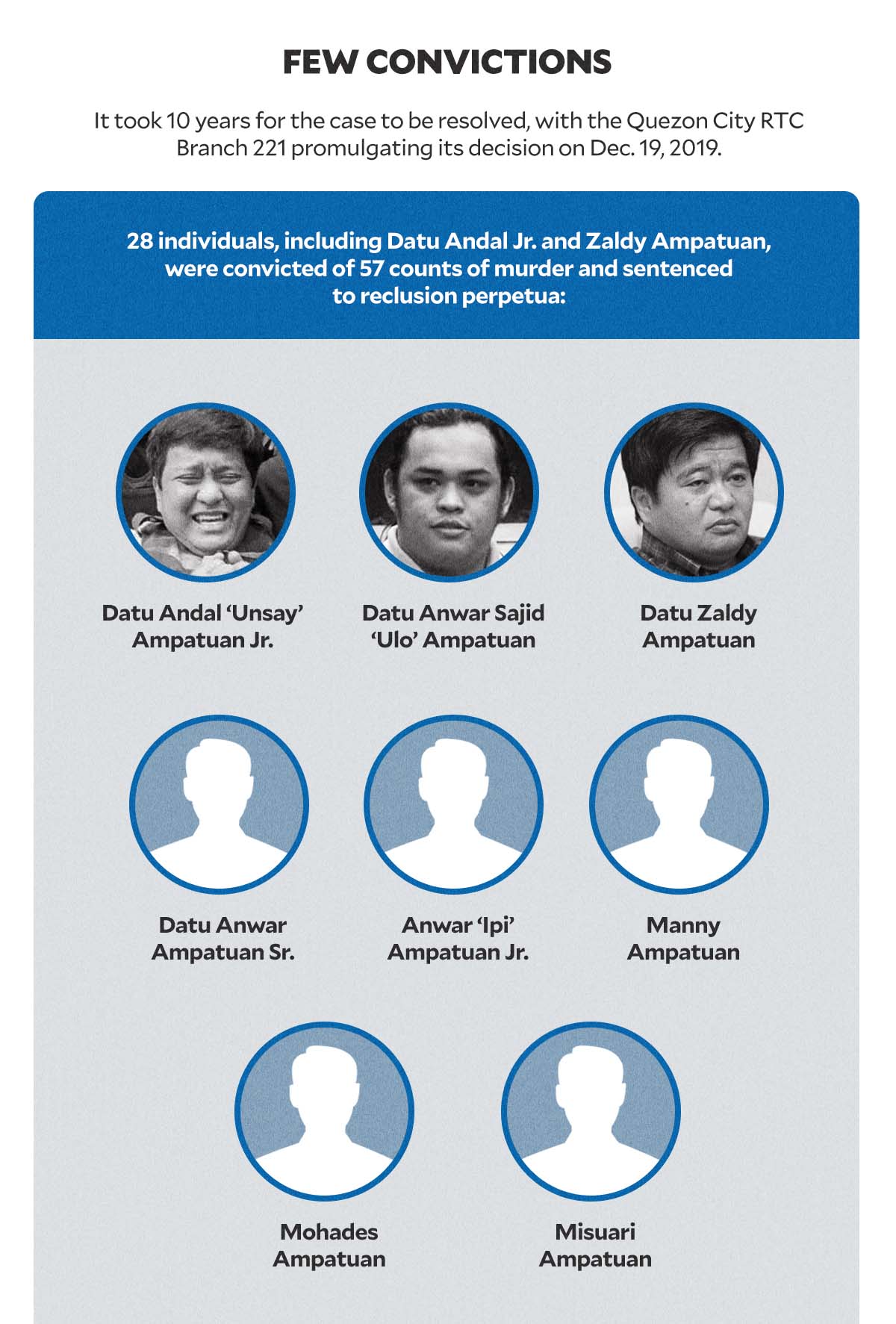 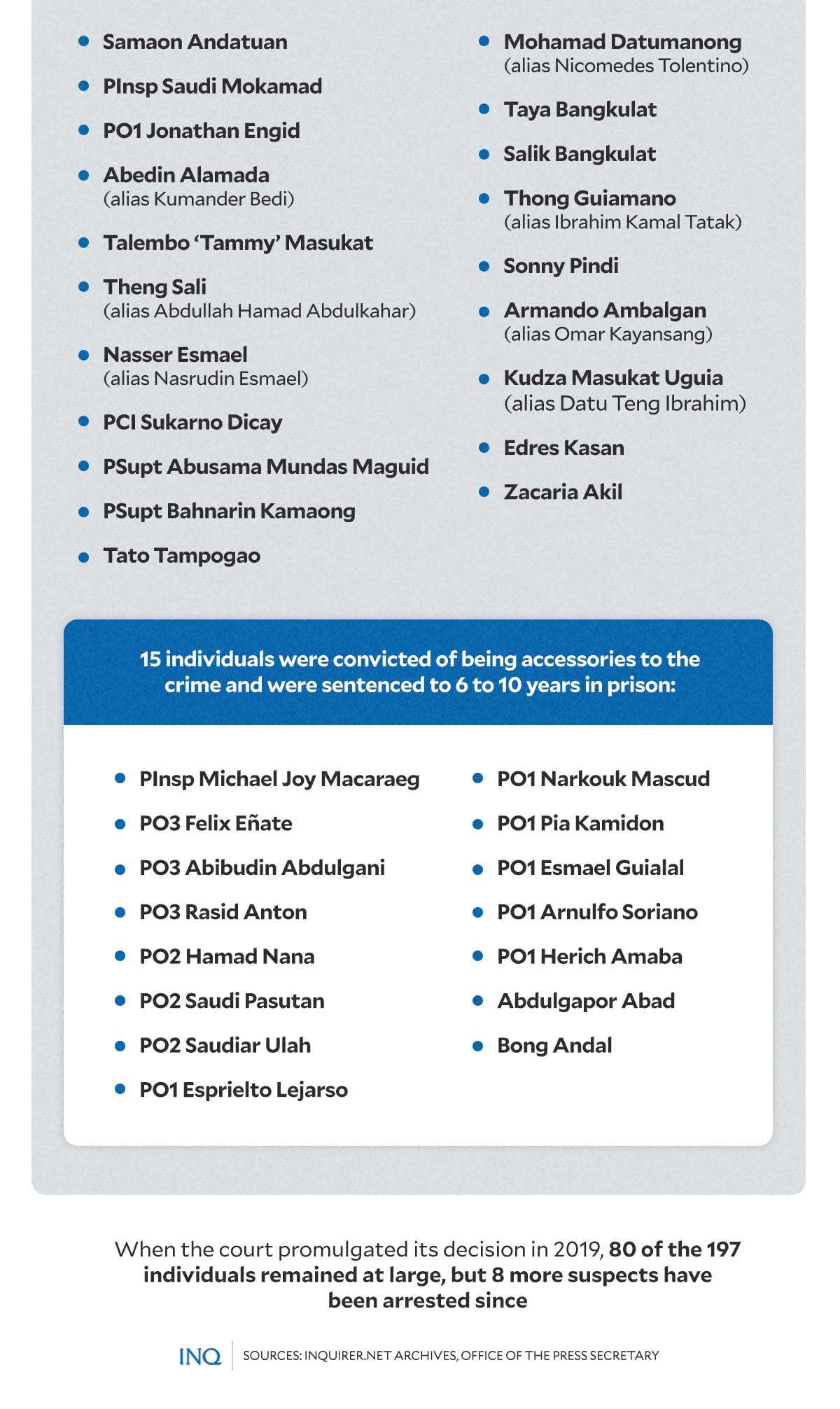 This was shared by Crizbelle May Lorenzo, a reporter based in the Bangsamoro Autonomous Region in Muslim Mindanao (BARMM), who told the INQUIRER that “it is still risky covering the areas of BARMM.”

Looking back, it was on Nov. 23, 2009 when then Maguindanao governor Andal Ampatuan Sr., tried to stall a possible challenge to his clan’s grip on power as Mangudadatu declared his bid against Ampatuan Sr.’s son, Andal Jr., for governor.

But as Mangudadatu’s relatives, accompanied by 32 media workers, were on their way to a local Comelec office to file the challenger’s COC, Ampatuan’s men stopped the convoy, including six motorists who were just passing by the route, in Barangay Kauran, Ampatuan, a town named after the powerful clan.

From there, the gunmen brought the victims to the isolated hills of Sitio Masalay in Barangay Salman, where they were shot with high-powered firearms and hastily buried in shallow graves.

At first, only 31 individuals were initially charged for the massacre, but the number of accused increased to 197 when the Philippine National Police-Criminal Investigation and Detection Group added more names to the list of suspects. 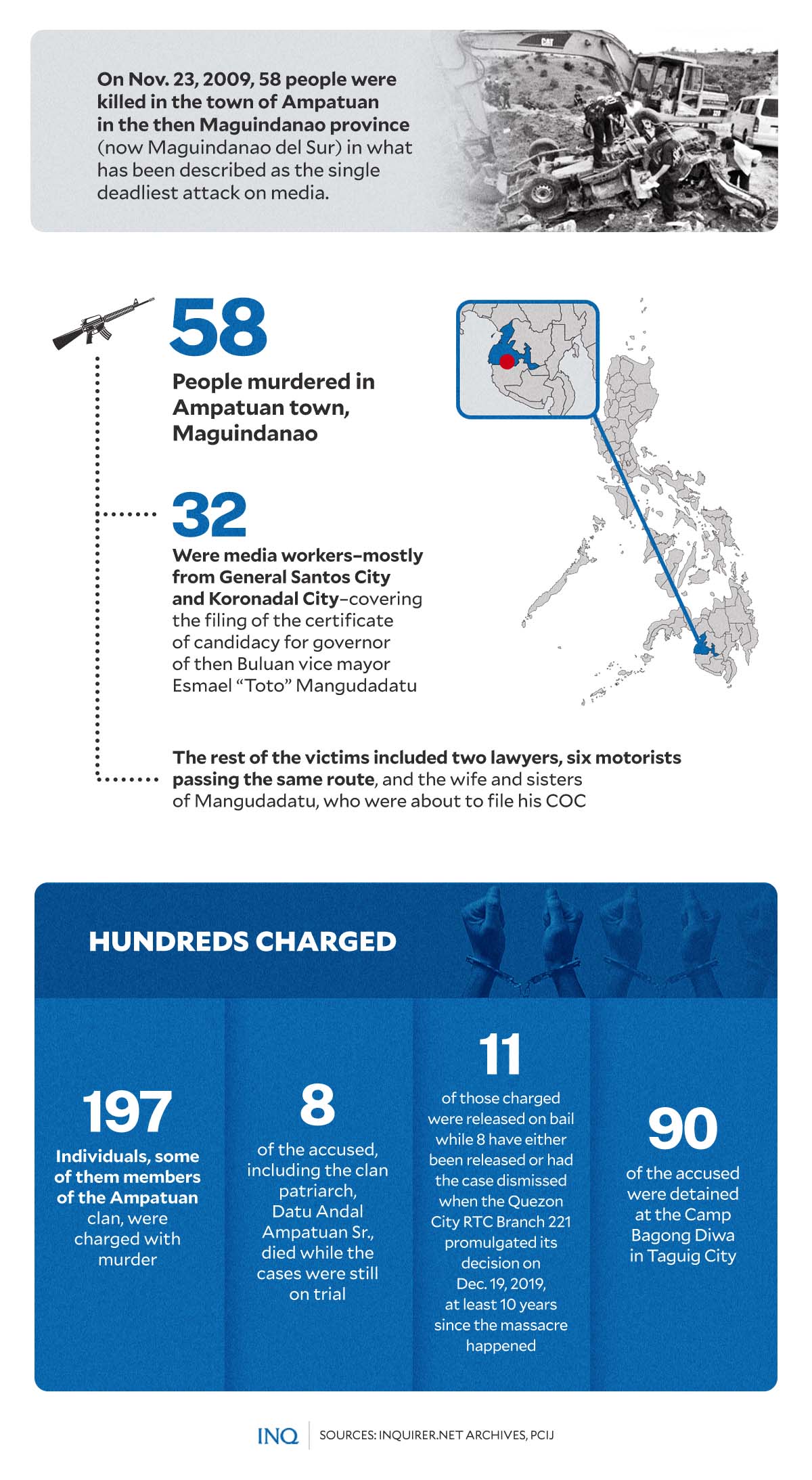 Since then, over 90 were detained at Camp Bagong Diwa in Taguig City, but eight of the accused, including the clan’s patriarch, Ampatuan Sr., died while the case was still on trial.

It was only on Dec. 19, 2019, 10 years after the massacre, when the decision on the case was promulgated, with the Quezon City Regional Trial Court Branch 221 convicting 28 of the accused for 57 counts of murder.

READ: Maguindanao massacre: The wound of PH impunity that will never heal

The decision, which was written by Judge Jocelyn Solis-Reyes, also convicted 15 individuals for being accessories to the crime. But 56 people, including Datu Sajid Islam, one of Ampatuan Sr.’s sons, had been acquitted.

Fight far from over

While the 761-page decision ended a decade-long trial that heard 357 witnesses and examined 238 case folders, lawyer Nena Santos, the private prosecutor of the case, had told ANC that the fight is not yet over.

This, as over 80 suspects, including 15 members of the Ampatuan clan, remained at large when the promulgation was made on Dec. 19, 2019, 10 years since the massacre took place, as efforts to arrest them had failed.

Santos said they would want the 80 accused to be arrested by the PNP “so that we will continue the trial against them,” stressing that most of the 80, as revealed by witnesses, were the actual killers who shot the victims.

RELATED STORY: No justice yet for journalists killed in Ampatuan

But almost three years since 2020, only eight have been arrested. One was killed while police were serving him an arrest warrant, Press Undersecretary Eugene Rodriguez said.

Likewise, relatives of the victims stressed in 2020 that “while there has been a verdict, the Ampatuan convictions can still be and, in fact, have been appealed.”

According to the New York-based Human Rights Watch (HRW) in 2010, the Ampatuans had controlled life and death in Maguindanao for more than two decades through a “private army” of 2,000 to 5,000 armed men.

HRW said while killings among ruling families in the region were not new, “the scale and brutality of the Nov. 23 massacre far exceeded previous attacks in this violent region.”

“Less scrutinized than the violence itself, however, but ultimately of greater significance, is the support that the national government provides such families throughout the country, and the near total impunity that their abusive militias enjoy,” it said.

“Successive national governments have not dismantled and disarmed these militia forces, as stipulated in the 1987 Constitution, nor have they investigated and prosecuted unlawful activities by those who control, arm, and use them for private ends.”

HRW stressed that because of this, “rather than trying to prevent militias from carrying out criminal acts, the military and police often provide them with manpower, weapons, and protection from prosecution.”

In its 2010 report about the massacre, HRW charted the Ampatuans’ rise and expansion, “aided by President Gloria Macapagal Arroyo, who relied on the family for crucial votes and support in the protracted armed conflict with Moro armed groups in Mindanao.”

“For more than two decades, the Ampatuans operated unchecked by the national police, the military, and the Department of Justice, which have not only failed to seriously investigate crimes allegedly committed by the family’s militia, but have even armed and worked alongside its members,” HRW said.

RELATED STORY: The haunting in Maguindanao