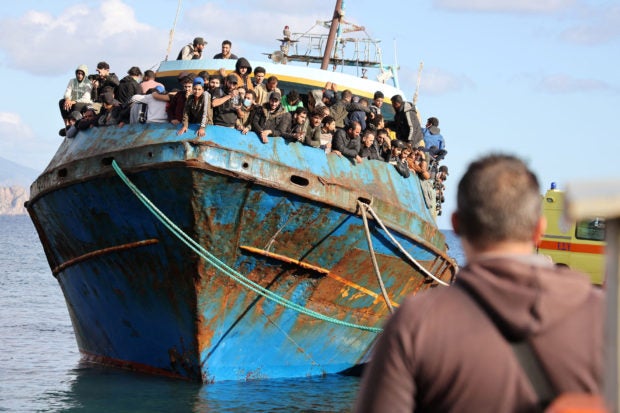 Migrants stand onboard a fishing boat at the port of Paleochora, following a rescue operation off the island of Crete, Greece, November 22, 2022. REUTERS/Stringer

ATHENS — Greece rescued hundreds of migrants on Tuesday after the fishing boat they were traveling on issued a distress signal off the island of Crete, the coast guard said.

A spokesperson for the coast guard cited survivors as saying about 400 to 500 people were on board. Two cargo ships, one navy frigate and one tanker assisted in the rescue, which was hindered by near gale force winds in the area.

The migrants were taken to the southern seaside town of Paleochora. The spokesperson could not immediately confirm their nationalities nor the exact number of people on board.

Together with Spain and Italy, Greece is one of the main entry points into the European Union for refugees and migrants from the Middle East, Africa and Asia. Most asylum-seekers cross to Greece from neighbouring Turkey, though Greek news websites suggested those rescued on Tuesday had sailed from Libya.

Dozens of migrants rescued, four dead after boat runs aground on Spain’s Lanzarote