Maguindanao massacre: The wound of PH impunity that will never heal | Inquirer News 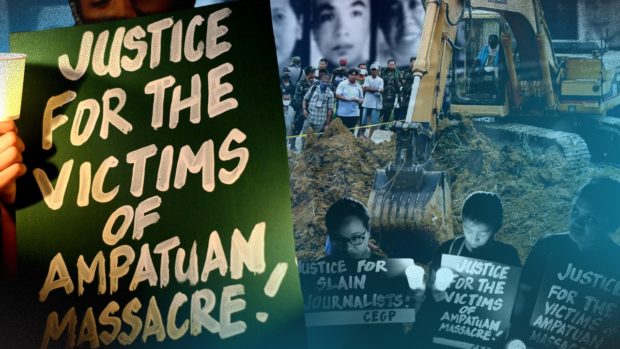 MANILA, Philippines—It was on Nov. 23, 2009 when 58 people were killed in what is considered as the worst-election related violence in the country, but while 28 people have been convicted of the brutal murders, dozens of suspects have yet to be arrested.

In 2019, the Quezon City Regional Trial Court (RTC) Branch 221 promulgated a decision that convicted 28 people for 57 counts of murder, sentencing them to reclusion perpetua, or a maximum of 40 years imprisonment, without parole.

They were not convicted for the 58th murder because the body of the victim—Reynaldo Momay—has yet to be found. As stressed by the National Union of Journalists of the Philippines, they are still fighting for his official recognition as a victim.

The decision, which was written by Judge Jocelyn Solis-Reyes, also convicted 15 individuals, who were sentenced to six to 10 years, for being accessories to the crime. But 56 people, including Datu Sajid Islam Ampatuan, had been acquitted. 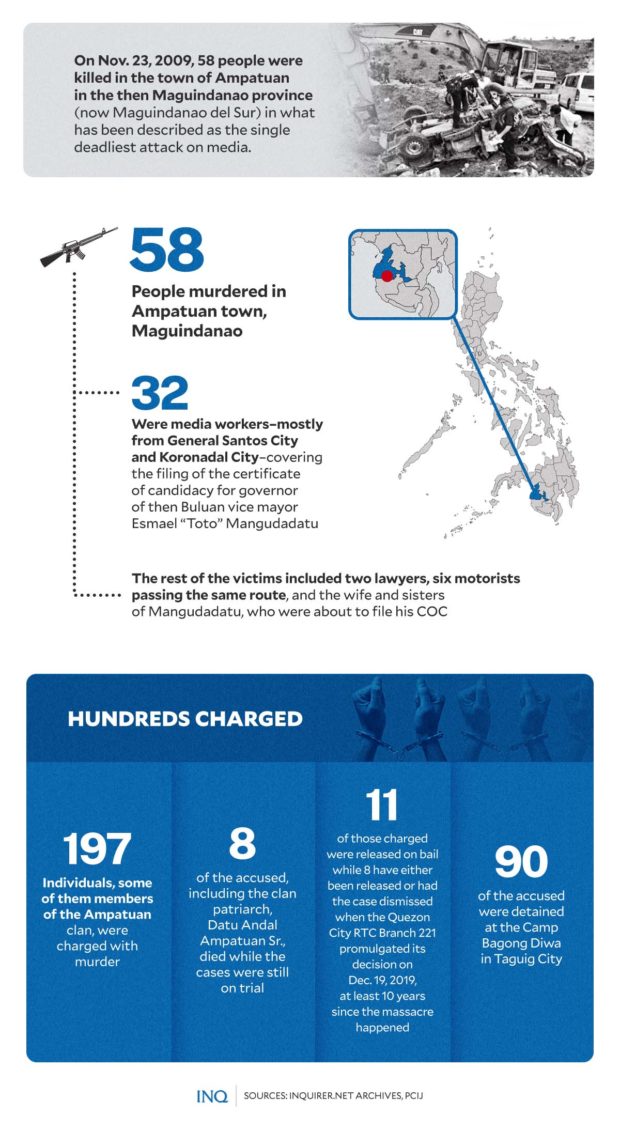 The massacre, which took place in Ampatuan town in what was then the province of Maguindanao, resulted in the filing of murder charges against 197 individuals, some of them members of the Ampatuan clan.

However, according to data from the Philippine Center for Investigative Journalism (PCIJ), 11 of the accused were released on bail, while eight have either been released or had the case against them dismissed before the 2019 decision was promulgated.

Likewise, eight of the individuals charged with murder, including the clan patriarch, Datu Andal Ampatuan Sr., died while the case was still on trial. Ampatuan Sr. died at the National Kidney and Transplant Institute in 2015.

But while the 761-page decision ended the decade-long trial that heard 357 witnesses and examined 238 case folders, lawyer Nena Santos, the private prosecutor of the case, had told ANC that the fight is not yet over.

This, as 80 suspects, including 15 members of the Ampatuan clan, remained at large when the promulgation was made on Dec. 19, 2019, ten years since the massacre took place, as efforts to arrest them had failed.

Santos said they would want the 80 accused to be arrested by the Philippine National Police (PNP) “so that we will continue the trial against them,” stressing that most of the 80, as revealed by witnesses, were the actual killers who shot the victims.

But in almost three years, only eight of the 80 accused who remained at large have been arrested. One was killed while the police were serving him an arrest warrant, Press Undersecretary Eugene Rodriguez said.

It was last year when the Presidential Task Force (PTFoMS) on Media Security commended the arrest of Singkala, saying that the government has made it priority to capture the remaining suspects of the massacre. Six accused have been arrested then. 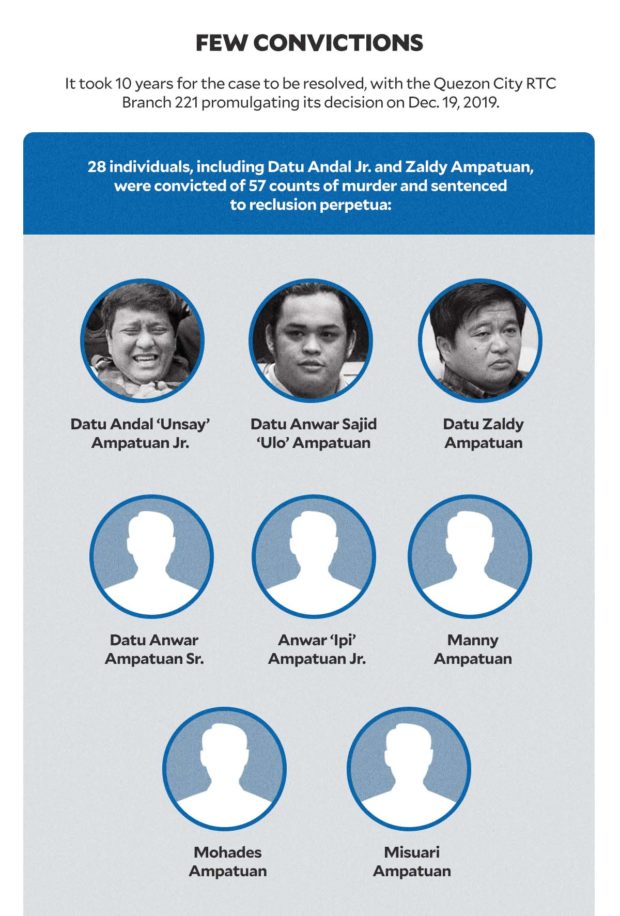 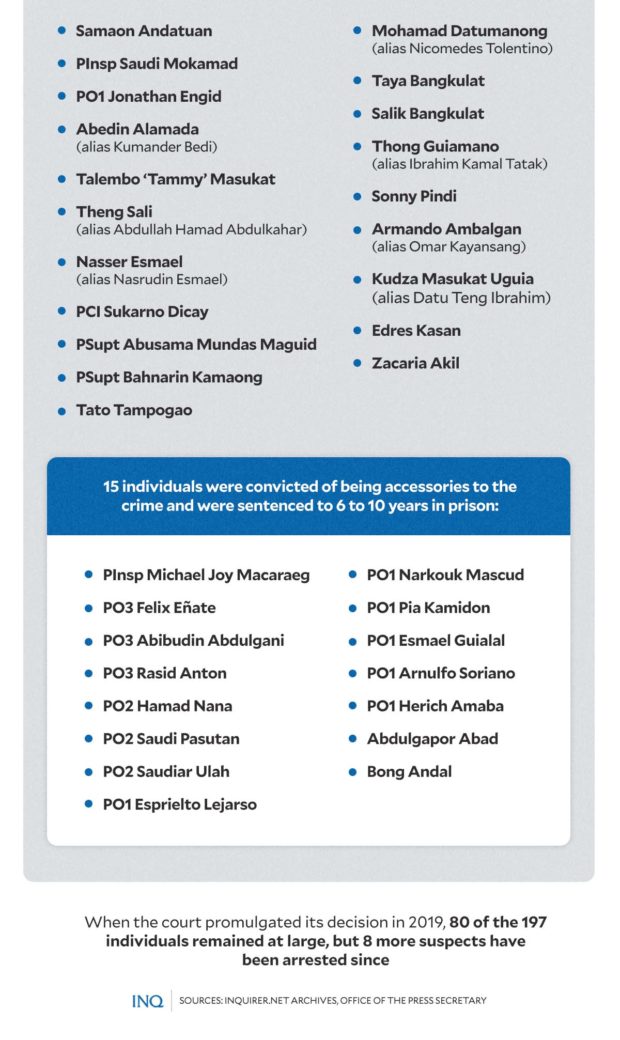 A year later, Macapendeg and Musa, who carried P300,000 and P250,000 rewards on their heads, were likewise arrested by the Criminal Investigation and Detection Group (CIDG) of the Bangsamoro Autonomous Region in Muslim Mindanao.

Rodriguez said the Office of the Press Secretary “wants to make it clear” that the government “does not forget these heinous crimes committed against journalists and is strongly committed to protecting them.”

The Philippines is considered the seventh most dangerous country for media workers, with the Committee to Protect Journalists (CPJ) saying that it is the second country—next to Mexico—with the highest number of murders of journalists.

Based on the Global Impunity Index 2022, the Philippines, as of 2022, has at least 13 journalist killings that are not yet solved, including the deaths of Renato Blanco and Percival Mabasa within the first two months of the current administration.

But CPJ said all over the world, most killers of media workers continue to get away with murder, stressing that in almost 80 percent of 263 cases, no one has been held to account.

‘Single deadliest attack on the media’

As 32 out of 58 people murdered in 2009 were media workers, the Maguindanao Massacre is considered the “single deadliest attack on the media in modern times,” with journalists from all over the world coming together then to condemn the killings.

The massacre “catapulted” the Philippines from sixth to third in the Global Impunity Index in 2010, with CPJ saying that the murders “overshadowed the gains that the Philippines had made [in] winning convictions in two journalist murders.”

READ: IN THE KNOW: PH third in 2010 Impunity Index

Back in 2009, 32 media workers, including Momay, were part of the convoy of the wife, sisters, and lawyers of then Buluan town vice mayor Esmael Mangudadatu, who were set to file a certificate of candidacy for governor on his behalf.

According to PCIJ, the journalists, mostly from General Santos City and Koronadal City, were covering the filing of Mangudadatu, who was then about to challenge Ampatuan Sr. in the race for the highest office in the province.

But when the convoy was already in Ampatuan town, where the mayor was Datu Andal “Unsay” Ampatuan Jr., the 58 victims, including six motorists, were killed in broad daylight, with their corpses buried in shallow graves on a hilltop.

While only 31 individuals were initially charged for the massacre, the number of the accused reached 197 as the PNP-CIDG added more names to the list of suspects. Over 90 of the accused were detained at the Camp Bagong Diwa in Taguig City.

As stressed by PCIJ, the defense, in the course of the 10-year trial, filed motions that added weeks and months to the process, with one lawyer, who was representing the Ampatuans, asking Solis-Reyes to inhibit herself.

Then in August 2019, “as defense lawyers were due to submit a memorandum summing up their arguments, lawyer Paul Laguatan, then counsel of ‘Datu Unsay,’ asked for the re-opening of the trial, which the court promptly denied.”

Likewise, eight contempt and two disbarment cases were filed against Santos, who was the private prosecutor in the case.

“The numerous motions for reconsideration, the time given for the defendants to find new lawyers, as well as “delaying tactics of the defense,” tied up the case during the last three years,” Santos told PCIJ in 2019.

Elisabeth Withcel, impunity campaign consultant of CPJ, had stressed that the decision of the RTC in 2019, while “a long-awaited moment in the global fight against impunity in journalist killings,” is “bittersweet.”

“For more than 10 years, friends and families of the victims have waited for justice and closure; colleagues across the country waited to learn just how many journalists would have to be killed before the grip of impunity that had taken hold in the Philippines could be loosened.”

“Moreover, justice has not just been slow, but also only partial,” she said.

This, as brothers Ampatuan Jr. and Zaldy, two of the 28 convicted for the massacre, had said they will head straight to the Court of Appeals to seek the reversal of the decision of the Quezon City RTC Branch 221.

As stressed by the relatives of the victims in a letter addressed to Unesco in 2020, they acknowledge that the decision of the RTC was a triumph of justice, however, they said: “Regrettably, that one court decision does not mean that the case is ‘resolved.’ Far from it.”

“While there has been a verdict, the Ampatuan convictions can still be and, in fact, have been appealed,” they said.

The relatives of the victims also stressed that almost 80 more suspects, 15 of them surnamed Ampatuan, remain at large more than a decade after the mass murder.

They said “all of them should be tried, but as of February 20, 2020, only four, two of them policemen, have been arrested and are on trial. Another principal accused, Sajid Islam, brother of Zaldy, Andal Jr. and Anwar Ampatuan, was acquitted even if he was present at the meeting when the massacre was planned.”

Back in 2020, Sajid Islam was the incumbent mayor of a town in Maguindanao province, where the massacre happened.

“This is the reason why the families of the 32 journalists who perished, as well as the witnesses who testified for the prosecution, continue to fear for their safety.”

“As many are not enrolled in the Department of Justice’s witness protection program, and continue to live in their known communities, they remain exposed to possible retaliation and attacks.”

Even Mangudadatu revealed that he was offered P100 million to drop the charges against those behind the massacre that killed 58 people, including his wife, Genalyn.