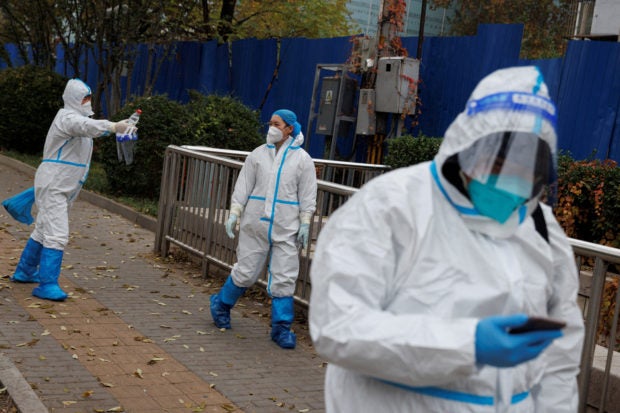 BEIJING – Over the weekend, much of Beijing was shut down as Covid-19 cases continued to spike in the Chinese capital, even as the country reported its first coronavirus death since May.

Municipal officials on Friday urged residents to stay home for the city to “quieten down”, but left it to individual districts to decide what control measures to implement. This resulted in the uneven enforcement of rules, with some areas issuing dine-in bans on Friday evening while other eateries were allowed to operate throughout the weekend.

Although lockdowns are continuing in several residential areas, they have been on a smaller scale, targeting only buildings with positive cases and adjacent blocks.

On Sunday, China reported 24,215 locally transmitted Covid-19 cases, of which 22,011 were asymptomatic. Nearly 8,400 came from Guangdong province, where there is an ongoing outbreak, and over 4,500 from Chongqing city in south-western China. There were 516 cases in Beijing.

The city also reported a Covid-19-related death on Sunday – that of a 86-year-old man who was admitted to Ditan Hospital with a lung infection and several underlying medical conditions. Local health officials said the man had chronic hypertension and degenerative brain disease, among other issues. His condition worsened on Saturday and resuscitation efforts were unsuccessful, said Ditan Hospital’s deputy head Jin Ronghua.

The current outbreak is proving to be a test for the new rules released by China’s top health authority on Nov 11.

According to the National Health Commission, local officials are encouraged to minimize disruption to daily lives by having even more targeted lockdowns and not shut schools arbitrarily just because of a few cases.

But many local governments, including the Beijing municipality, are finding it a challenge to square off the new regulations with the over-riding zero-tolerance policy, which places an emphasis on eliminating Covid-19 cases in the community.

While China’s test, trace and isolate strategy had been successful in the early days of Covid-19, the highly transmissible Delta and Omicron variants are straining the system like never before. Since a bruising lockdown of financial hub Shanghai that lasted nearly three months, as well as various flash lockdowns in other areas, the economy has been losing steam.

In Beijing, streets are emptier than before as non-essential businesses, including gyms and pet supply stores in some areas, have been ordered to shut, some with security tape pulled across the doors. Heavy pollution has also kept most residents indoors and most traffic on the roads involves delivery riders in their prominent blue or yellow jackets, wrapped up against the early winter chill.

Several malls have been asked to close, but supermarkets and eateries are allowed to open to ensure people have access to essentials.

Amid the smog, snaking queues formed around Covid-19 testing booths on Sunday after it was announced that those taking public transport and going to malls would require a nucleic acid test done within the past 48 hours, a stricter regulation than the previous 72 hours.

“Since tomorrow is a Monday, we encourage residents of Chaoyang to stay within the district as much as possible… and for companies to allow their workers to telecommute, with meetings done virtually,” said Chaoyang official Yang Beibei during a Sunday evening press briefing.

She had earlier encouraged residents of Chaoyang – a sprawling area in Beijing that includes foreign embassies and the Central Business District – to stay home over the weekend, framing it as a civic duty to the city.

Adding to the confusion are some rules which have left residents scratching their heads.

An official on Friday said that residents from Chaoyang district, by far the hardest-hit area in Beijing, would have to present 48-hour nucleic acid tests when entering other parts of the city – similar to the requirement for cross-provincial travel. However, the rule is largely impossible to enforce in Beijing simply because just crossing a street could land a person in another district.

But some residents have welcomed the new measures.

In Dongcheng district, close to the city centre, residents of four blocks in a 22-block compound have been locked down for the second time in a month after a coronavirus case was found in one of the units.

“If you compare this to (the previous lockdown) a month ago, where all 22 blocks got locked down because of one case, it is an improvement,” said Madam Li, a resident in one of the affected towers. She declined to give her full name.

“We’re unlucky to be close to the affected unit, but parents of my daughter’s friends are saying how glad they are that they can still mostly go about their daily lives.”