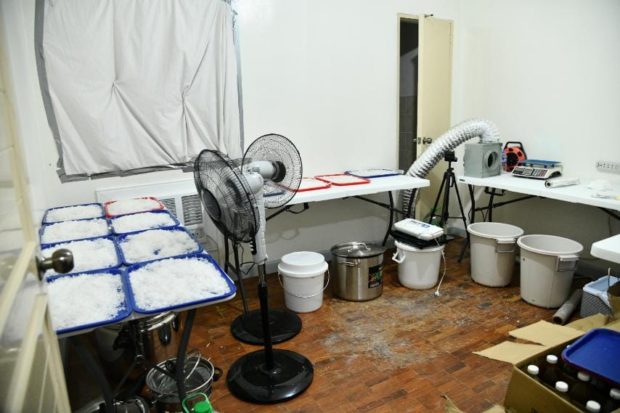 This photo from the Philippine Drug Enforcement Agency shows the alleged laboratory equipment and chemicals used in the manufacture of illegal drugs. The laboratory had been discovered inside a Muntinlupa City residence following a raid on Friday, November 18, 2022.

MANILA, Philippines — The successful seizure of over P149-million worth of shabu in an upscale Muntinlupa residence was the product of months of joint operations between law enforcement agencies fighting smuggling, the Bureau of Customs (BOC) said on Friday.

BOC Deputy Commissioner and retired Maj. Gen. Juvymax Uy said in a statement that before the anti-drug bust was carried out, the BOC and Philippine Drug Enforcement Agency (PDEA), the lead agency in the operation, formed a joint operation to investigate individuals suspected to be involved in smuggling shabu and cocaine to Australia.

A series of meetings were initiated between the two agencies that culminated in the operation, which Uy said is a step toward the right direction.

“I consider this a successful first step in bringing these perpetrators to justice and for them to face the full extent of the law. We’ve been after these groups for as long as I can remember. Even before I joined BOC, the agency has been after these smugglers of illegal drugs,” he said.

The BOC official, however, admitted that many drug traffickers are still able to circumvent the law and evade the eyes of Customs and other government agencies.

“But while the agency does its very best, we can’t deny that many of these continue to circumvent our laws and enter our borders. With my arrival here, my goal is to maximize the potentials of our collaborative efforts and work harder to stop the menace of illegal drugs,” Uy added.

Early Friday morning, PDEA agents implemented search warrants in two separate houses inside the posh Ayala-Alabang village.  At least 20 kilograms of shabu were found in several trays, all of which were estimated to be worth P136 million.

In the second house, over two kilograms of shabu worth P13.6 million had been discovered.

PDEA Assistant Secretary Gregorio Pimentel who led the operation meanwhile shared that it appears the groups were using a different scheme to manufacture shabu.  This method, which is odorless, makes manufacturing easier because the byproduct does not emit noticeable foul smell.

“This group used a modified setup for manufacturing shabu. The shabu is mixed in liquid form, then washed with acetone. It’s practically an odorless process, which is probably why they were confident in doing it here in a residential area,” Pimentel said.

“These suspects are linked to Mexican, Australian and Canadian drug trafficking groups. We are currently investigating these links and several other drug personalities,” he added.

Ruiz meanwhile assured the public that the different government agencies would continue collaborating to protect borders and end the smuggling of illegal drugs into the country.

“We are working continually to strengthen our collaborative efforts with other partner agencies to end the smuggling of illegal drugs and all other products into the country,” he noted.

This is not the first time that BOC, PDEA, and the Philippine National Police (PNP) worked together in seizing illegal drugs.  Last October, BOC said that close coordination and the avoidance of any information leaks led to the successful P6.7 billion drug bust — said to be the biggest in the history of the country.