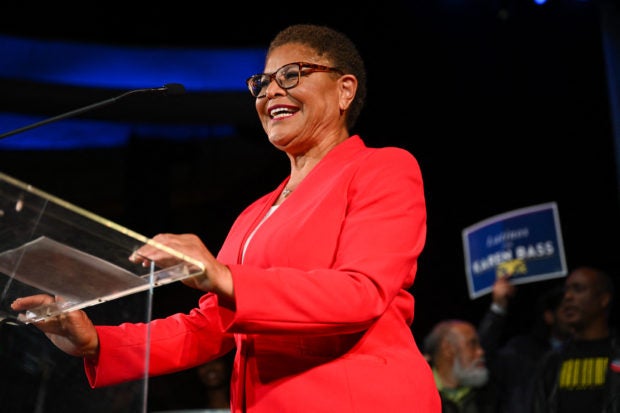 Lifelong Democrat Bass, who is Black and a longtime US congresswoman, beat an immensely well-funded challenge from former Republican property developer Rick Caruso, who spent an eye-watering $100 million of his own money on the race.

Caruso, 63, who is white, outspent his 69-year-old opponent by a factor of more than 11, blanketing local airwaves with slick commercials promising to fix Los Angeles’ intractable homeless problem.

But despite shedding his Republican Party membership and registering as a Democrat at the start of the year, it wasn’t enough to convince liberal Los Angeles.

With almost three-quarters of the vote counted, Bass had a lead of around 46,500, according to a tally released Wednesday, which local media dubbed “insurmountable.”

Counting continues and election officials are set to certify the results on December 5.

LA-born-and-bred, Bass has a hard-fought reputation in the city as a public servant, having been a community organizer who won election to California’s state legislature and then to the US House of Representatives.

She takes over at City Hall from Eric Garcetti, who was named as President Joe Biden’s ambassador to India more than a year ago, but whose confirmation has stalled.

Bass will take charge of a city blighted by homelessness, where tens of thousands sleep in tents or rusting RVs, with many suffering from mental health problems or substance abuse.

That issue is compounded by some of the costliest housing in the country, in a state and a city where the cost of living is high and taxes are well above the national average.

Bass will also take the helm of a city that is gearing up to host the 2028 Olympic Games, is the global capital of movies and remains the vibrant destination of choice every year for tens of thousands of young creatives from all over the world.

Bass will be the first woman in City Hall’s top job, but not the first Black mayor. That honor belonged to Tom Bradley, who was elected in 1973 and remained in office for two decades.

Fil-Am activists back Karen Bass for mayor of Los Angeles