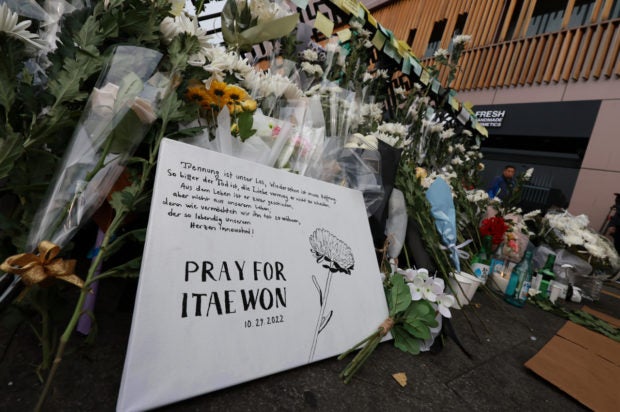 A mourning panel that reads “Pray for Itaewon” is seen on Nov. 1 at the Itaewon Subway Station, near the alley where the Itaewon tragedy took place Oct. 29. (Yonhap via The Korea Herald/Asia News Network)

SEOUL — The death toll from the crowd crush in Seoul’s Itaewon neighborhood rose by one to 158, authorities said Monday.

The additional victim is a South Korean woman in her 20s, the Central Disaster and Safety Countermeasures Headquarters said.

A total of 132 South Koreans and 26 foreign nationals were killed during the crowd surge in the popular nightlife district of Itaewon on Oct. 29.

Funeral procedures for 130 South Koreans have been completed and the bodies of 24 foreign nationals have been sent to their home countries, it said.

Out of the 196 people injured, 10 are still being treated at hospitals, the authorities said. (Yonhap)