I will not surrender, says ex-Palawan governor 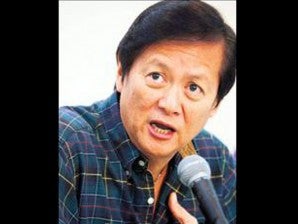 PUERTO PRINCESA CITY—In a message from his hideout aired on Thursday, embattled former Palawan Governor Joel T. Reyes indicated he had no intention of surrendering now despite a warrant for his arrest for the murder of broadcast journalist Gerry Ortega.

In his recorded message played on dzIP, a radio station based here, Reyes did not say if he would at any time heed the clamor of senior government officials that he turn himself in. Instead, he indicated he would remain in hiding.

Reacting to Reyes’ statements on radio, Cruz said: “The PNP will enforce the law without fear or favor.”

Without giving any indication on his whereabouts, the fugitive Reyes said he was hiding “sa inyong mga puso,” or “in the hearts of the people” of Palawan.

Reyes stressed he was in hiding “not to run away from justice but in order to avoid the persecution, ridicule and accusations that are being thrown at me without basis.”

Roger Lagasca, anchor of dzIP’s morning news program that aired Reyes’ statement, said the audio message was e-mailed to the radio station by the former governor.

Reyes has been indicted as the mastermind of the Jan. 24, 2011, killing of Ortega, a staunch environmentalist and a radio commentator of RMN (Radio Mindanao Network) Palawan. Ortega had been vocal in criticizing the Reyes administration.

Interior Secretary Jesse Robredo had warned he would order a nationwide manhunt for Reyes and his brother if they will not surrender within the week.

On Tuesday, Judge Angelo Arizala of the Palawan Regional Trial Court ordered the arrest of the Reyes brothers, who were charged with Ortega’s murder after a reinvestigation of the case by the Department of Justice (DOJ) in Manila.

Ortega, a staunch critic of Joel Reyes and of incumbent Governor Abraham Kahlil Mitra, was gunned down inside a used clothes store while shopping. The alleged triggerman, Marlon Recamata, was captured immediately and later confessed that his group was hired for the hit job for P150,000.

Robredo told the Philippine Daily Inquirer the other day that he preferred that the Reyes brothers be taken in custody without resistance than be hunted down as fugitives.

“I will order a manhunt if they don’t,” Robredo said.

Police had thought that the former governor was in his house in  Dasmariñas Village in Makati City because he had been seen there, but called off their operation the other day after six hours without seeing him.

A police source in Puerto Princesa City earlier said Reyes’ whereabouts had been determined by the authorities.

A coaccused also ordered arrested by the judge is now in custody. On Tuesday night, lawyer Romeo Seratubias, former provincial administrator of Reyes, was arrested by agents of the Criminal Investigation and Detection Group (CIDG).

Seratubias was the registered owner of the .45 cal. pistol used to kill Ortega.

Reyes was indicted by the DOJ on the basis of the testimony of his former bodyguard, Rodolfo Edrad Jr., who had confessed to having organized the assassination of Ortega and claimed his group did it on Reyes’ instruction.

Edrad’s testimony was rejected by the first DOJ  panel but this was reversed by a new panel, which also accepted additional evidence from the prosecution, including records of text messages between Reyes and Edrad before and right after the Ortega murder.

Recamata, the supposed lone assailant, was arrested moments after the killing with the help of passing firefighters and bystanders. His accomplices fled.

Recamata later said his group was hired by Edrad for the hit job.

Ortega’s widow, Patria Gloria, claimed  only Reyes had the motive to order her husband killed. She said her husband had criticized Reyes in his daily radio program for the latter’s purported inability to stop the abuses and violations of environmental laws committed by mining companies in Palawan.

The widow said Reyes had also blamed her husband for the latter’s failed run for a seat in Congress.