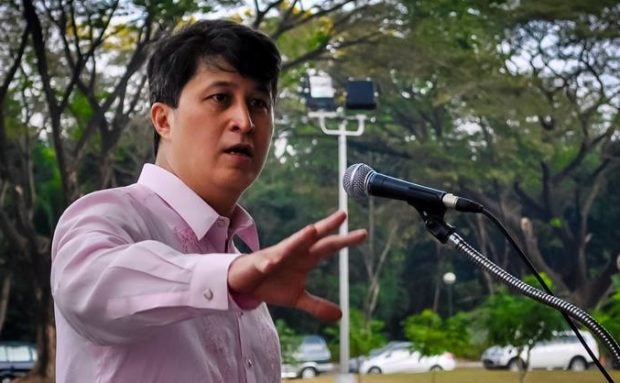 De Lima in a statement on Thursday, written from her detention cell at the Philippine National Police (PNP) Custodial Center, vouched for Belmonte’s integrity and credibility.

The former senator said this after supporters of the opposition, particularly LP and former vice president Leni Robredo, expressed their dismay over Belmonte’s decision to lawyer for Juanito III in the latter’s drug possession case.

“I respect Cong. Kit Belmonte’s decision to represent Juanito Jose Remulla III as his lawyer.  I have known Kit for a long time. As a lawmaker, public servant, party-mate and ally, his track record, principle and credibility remain untarnished,” de Lima said.
“As I have previously said, whether the accused is the son of the Justice Secretary or not, every person charged with a crime is presumed innocent until proven guilty. Sec. Remulla’s son deserves a fair trial and a good legal representation,” she added

Belmonte confirmed last November 4 that he is indeed one of the lawyers of Juanito III, who was arrested by Philippine Drug Enforcement Agency (PDEA) agents during a controlled delivery operation.  Juanito III received the package containing around a kilogram of kush — a hybrid of the marijuana plant — estimated to be worth more than P1.3 million.

It was also Belmonte who told INQUIRER.net that Juanito III pleaded not guilty to drug possession charges.

Juanito III is the son of Justice Secretary Jesus Crispin Remulla.  According to some supporters on Twitter, they are perplexed as to why Belmonte — LP’s current vice chairperson — would help Remulla when the official has red-tagged Robredo’s supporters on the ground.

Kit Belmonte campaigned for Leni a few months ago and is now defending the son of Boying Remulla who red tagged kakampinks in Cavite, accused Leni's team of paying attendees 500 pesos each, and campaigned for BBM.

This just shows the closeness of the ruling class. https://t.co/WOeLbN4Uoa

First of all what is this behavior after he red tagged you and the campaign you were part of at every opportunity? And second ang kapal naman ng mukha nila to seek his assistance after redtagging him?

But de Lima maintained that she and Belmonte have been fighting for human rights — and part of human rights is getting good legal representation for drug-related cases, regardless of their status in life.

Before being a senator, de Lima — a lawyer by profession — used to be the Commission on Human Rights (CHR) chairperson under former president Gloria Macapagal-Arroyo’s term.  She was then appointed Justice Secretary by late former president Benigno Aquino III.

(I and Kit have been long fighting for human rights, including the right to due process which was not afforded to thousands of Filipinos killed by the bloodthirsty regime of Duterte.  In this crusade, it does not mean that we would deprive the similar rights to people who are rich or are in higher places of our society.)

(Whatever their stature in life is, they should be protected by law.  Kit knows, that it is not merely a part of our profession as lawyers, but it is also a fight for democracy, the prevailing rule of law, and human rights.)