US urged to back Asean | Inquirer News
Close
menu
search

US urged to back Asean 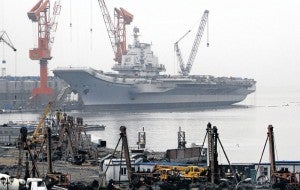 SLOW BOAT FROM CHINA In this April 17 file photo, China’s first aircraft carrier is under restoration at a shipyard in Dalian in northeastern China’s Liaoning province. The Hong Kong Commercial Daily reported on Tuesday that some form of limited testing of the ship was planned to coincide with 90th anniversary celebrations of the founding of the Chinese Communist Party on July 1. AP

WASHINGTON—Sen. John McCain on Monday called for the United States to expand military and political support to Southeast Asian nations to stand up against China in the increasingly volatile West Philippine Sea (South China Sea).

McCain, a senior member of the Republican Party, said the United States should help members of the Association of Southeast Asian Nations (Asean) to develop and deploy an early warning system and coastal vessels in contested waters.

The former Navy captain said the United States should also turn to diplomacy to help Asean members sort out their own disputes and “establish a more unified front,” hailing a recent agreement between Malaysia and Brunei as an example.

“China seeks to exploit the divisions among Asean members to play them off each other to press its own agenda,” McCain told a conference at the Center for Strategic and International Studies, a Washington think-tank.

McCain, a champion of an assertive military policy who lost the 2008 presidential race to Barack Obama, welcomed the administration’s defense of freedom of navigation in the West Philippine Sea but said it should go further.

He said it should let “other countries know, where possible, which claims the United States accepts, which ones we do not, and what actions we are prepared to support,” especially in defense of the Philippines, a treaty ally.

Tensions have been rising in the potentially resource-rich West Philippine Sea, where Beijing has myriad territorial disputes.

In recent weeks, Vietnam has carried out live-fire naval drills and the Philippines has announced plans to send its naval flagship in contested waters after incidents at sea.

The United States and Vietnam, which have growing ties, last week jointly called for a peaceful resolution to disputes in the West Philippine Sea. Hanoi refers to the area as the East Sea.

But the United States as a general rule does not take positions on territorial disputes to which it is not party.

McCain said he welcomed a cooperative relationship with China and did not seek conflict, but he laid the blame squarely on China’s “aggressive behavior” and “unsubstantiated territorial claims” for recent tensions.

McCain, who has voiced alarm at what he sees as isolationism within his party, said the United States had an interest in working to prevent any nation from using “persistent bullying” to impose itself on the West Philippine Sea.

“It could create a troubling incentive for rising powers everywhere to take by force what peaceful legal means cannot secure for them,” McCain said.

China insisted last week that it would not resort to the use of force in the West Philippine Sea and urged other countries to “do more for peace and stability in the region.”

Speaking at the Washington conference, Su Hao, a scholar at China Foreign Affairs University in Beijing, insisted his country was not becoming more assertive.

Su, who said he was not representing the government, described China as a “benign giant” that sought cooperation but happened to be in a less friendly neighborhood than the United States.

“For China, we prefer peace and stability rather than conflict,” he said.

Su questioned why tensions have risen rather than calmed down in the nearly one year since US Secretary of State Hillary Clinton, on a visit to Hanoi, issued a call for freedom of navigation in what Beijing refers to as the South China Sea.

Su said that the Chinese “feel scared sometimes, or feel some kind of uncertainty to make us try to say something to support our claims in the South China Sea.”

“The reason why China looks a little bit assertive is because there is some sort of reaction to some things happening against China,” he said.

In Beijing, foreign ministry spokesperson Hong Lei told reporters on Tuesday that China’s territorial claims in the West Philippine Sea did not interfere with other countries’ right to travel in the disputed waters and pledged to resolve the latest spat peacefully.

Hong’s comments came after Singapore on Monday urged China to be more open about the extent of its territorial claims, saying Beijing’s ambiguity was causing international concern.

Singapore’s foreign ministry said that while the city-state had no claims of its own, it was a major trading nation whose interests could be affected by issues relating to freedom of navigation in the area. AFP