Bodies from Bilibid have piled up; so do questions | Inquirer News

Bodies from Bilibid have piled up; so do questions 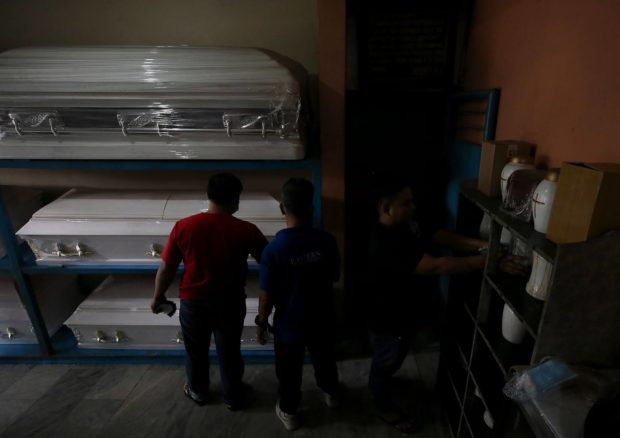 PACKED Drawing attention because of the Mabasa murder probe, the sole funeral home accredited by the Bureau of Corrections suddenly becomes the talk of the town due to the growing number of unclaimed bodies of Bilibid convicts in its morgue. —RICHARD A. REYES

The virtual pileup of more than a hundred unclaimed bodies of New Bilibid Prison (NBP) inmates at a funeral home in Muntinlupa City is raising unsettling questions as to why and how they have remained there since last year.

On Monday, police officers investigating the death of Cristito “Jun Villamor” Palaña, the alleged middleman in the Oct. 3 killing of radio commentator Percival “Percy Lapid” Mabasa, unintentionally learned about about the 30 corpses being kept at Eastern Funeral Homes in Alabang when they went there for the autopsy on Palaňa’s body.

It later turned out, however, that Eastern Funeral had provided a list to the Muntinlupa police station indicating a total of 176 bodies unclaimed since December 2021, according to Southern Police District director Brig. Gen. Kirby John Kraft.

In an interview on Tuesday, Charlie Bucani, the funeral home’s manager, gave a higher count—178.

Bucani recalled that since December 2021, “about 50 to 60” corpses have been brought to his funeral home from the national penitentiary every month. Eastern is the sole mortuary service company accredited by the Bureau of Corrections (BuCor).

He said one of the most recent to be brought in was the body of Palaňa, who was found dead on Oct. 18, the same day that Joel Escorial, the confessed gunman in the Mabasa murder, was presented to the media.

Speaking to reporters on Wednesday, Justice Secretary Jesus Crispin Remulla said “one of the things that surprised the investigators, in this case, was the fact that when they went to Eastern Funeral Homes for (Palaña’s) autopsy, the first autopsy conducted by the National Bureau of Investigation, they were surprised to see more than 30 corpses inside the funeral home.”

Remulla said the Department of Justice (DOJ) would arrange for the bodies to be given proper burials.

“The DOJ’s task now… is to locate the families of these people,” he said. “Remember they’re cadavers of people who had families. We’ll try to give them a decent burial.”

“We want to know how all these people died; the cause of death and the facts surrounding their deaths … We will study it. We can know how long this has been going on,” Remulla added.

According to Kraft, “what we have are just names and the date and time of their deaths.”

“The Muntinlupa police is still coordinating with the NBP Hospital to get the medical records of these inmates to know the causes of deaths. We also want to know why the bodies were still there for that long,” the police official added.

Police have yet to determine if there were lapses committed on the part of BuCor or Eastern Funeral to explain the pileup of cadavers. An “accounting” is in progress, according to an Inquirer source.

Citing official records, Bucani said “most” of the inmates were listed as having died of “natural” causes.

“Almost all inmates who die in Bilibid are brought here, except if they are COVID-19 cases, who are instead cremated,” he said.

Bucani said the funeral home had asked BuCor to arrange the burial of 126 unclaimed bodies, which he said were “already overdue” as of this month.

Eastern Funeral would only keep bodies for five to six months in its morgue. If unclaimed, they are to be retrieved by BuCor personnel and buried at the NBP Cemetery, Bucani said.

Remulla said the DOJ was “in negotiations already with the UP (University of the Philippines) College of Medicine for the bodies. We will try to locate the families first. Ask their permission, if possible, because we’ll have them autopsied first. If possible (the bodies would) just be used for the pursuit of science at the UP College of Medicine.”

Quoting a report from BuCor officer in charge Gregorio Catapang Jr., the justice secretary said a number of cadavers had been buried because they were also already decomposing.

“We can have them exhumed if there’s something suspicious,” Remulla said, adding that the DOJ had asked Eastern Funeral not to dispose of the remaining bodies.

Under BuCor policy, the prison superintendent notifies relatives of the deceased through registered mail addressed to the inmate’s last recorded address.

In August 2021, the bureau began asking local governments for help in locating the families of deceased inmates.

Data obtained by the Inquirer showed inmate deaths at NBP have been increasing from 2010 to 2020, except for a dip in 2018.

In 2020, cardiopulmonary arrest was recorded as the most prevalent cause of death at 270, followed by myocardial infarction at 154.

There were 89 inmates who died of COVID-19 and 84 from other types of pneumonia.

Twelve died due to stab wounds, while three died from bullet wounds.

BuCor officials cited overcrowding and lack of personnel as among the factors behind the high inmate mortality in NBP.According to the UN Office of Drugs and Crime, Bilibid has become the largest megaprison in the world that houses almost 50,000 inmates in a space intended only for 6,435.

The Inquirer earlier reported that it was during the term of the now suspended BuCor chief, Gerald Bantag, that the bureau recorded the highest number of inmate deaths per year since 1990.

The number rose further in 2021, with BuCor recording 1,166 deaths among the 48,501 population that year—the highest in its history.

As of September this year, BuCor has recorded 708 deaths. INQ

No restrictive custody yet for cops linked to NBP deaths — PNP