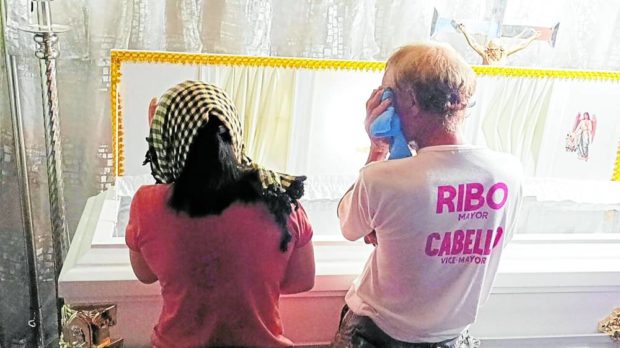 GRIEF-STRICKEN The father and sister of slain national penitentiary inmate Cristito “Jun Villamor” Palaña, the alleged middleman in the murder of broadcaster Percival “Percy Lapid” Mabasa, are inconsolable as they view his remains during the wake held at their home in Javier, Leyte, on Saturday. —PHOTO COURTESY OF ROEL AMAZONA

TACLOBAN CITY—The family of the slain alleged middleman in the murder of radio commentator Percival “Percy Lapid” Mabasa asked authorities to ensure that those involved in the twin killings be brought to justice.

The family of Cristito “Jun Villamor” Palaña, who died inside the New Bilibid Prison in Muntinlupa City on Oct. 18, made this call as the body of the slain prisoner arrived in this city on Saturday.

The closed casket of Palaña, who also went by the name “Jun Villamor,” arrived at Daniel Z. Romualdez Airport in Tacloban City on board a Philippine Airlines flight at about 6:48 p.m. last Saturday. His remains were immediately transported to his family’s house in Javier town, Leyte province, some 60 kilometers from here.

The slain prisoner’s father said he could not believe that his 39-year-old son was killed while behind bars.

“He was already in prison. Why do they need to kill him?” the sobbing father, who asked his name to be withheld for security reasons, told the Inquirer on Saturday.

The father could not be reached on Monday amid reports that suspended Bureau of Corrections chief Gerald Bantag and 10 other prison officials and inmates have been charged with double murder on Monday for the deaths of Mabasa and Palaña.

Palaña’s sister, who accompanied his remains from Manila, had said on Saturday that they wanted the persons who killed her brother to suffer the consequences of their actions.

“I hope the persons who did it will be bothered by their conscience,” she said.

Javier town police chief Lt. Nikcy Bermudo said they have assigned some policemen to ensure the safety of Palaña’s family.

“We have received instructions from the Provincial Mobile Force two weeks ago to secure the family of Palaña. About eight policemen were detailed there 24/7,” he said in a phone interview on Monday.

Bermudo said he could not determine yet when the police escorts would be pulled out.

“The instruction was just to secure the family. Whenever his father goes out of the house, for example, he must have an escort,” he said.

Based on the information relayed by Bermudo, Palaña had been away from his family in Leyte for quite sometime, having lived in Metro Manila for years before he was imprisoned in 2018 due to a drug-related case.

“The father [of Palaña] is a simple farmer with no known bad record. All his six children, including Palaña, have been living in Manila,” the police chief said.

Palaña was found dead inside the national penitentiary on Oct. 18, a day after Joel Escorial, the confessed gunman in Mabasa’s killing, surrendered to authorities.

It was only after Escorial had implicated Palaña as the middleman in the contract to kill the hard-hitting radio journalist that prison authorities revealed the inmate had died, allegedly after he was taken ill.

But an independent autopsy conducted by top forensic pathologist Raquel Fortun on the body of Palaña showed that the inmate was suffocated using a plastic bag placed over his head, as his body did not show signs of injury. INQ