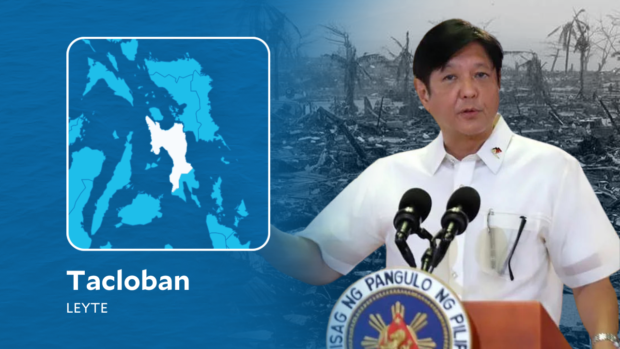 At 11 a.m., the President is set to arrive at the Holy Cross Memorial Garden in Barangay Basper where more than 2,220 people perished during Yolanda’s onslaught nine years ago.

Marcos will lead the offering of wreaths for those buried at the mass grave.

He will be welcomed by his cousins, Tacloban City Mayor Alfred Romualdez and Leyte Rep. and Speaker Ferdinand Romualdez.

The President is expected to deliver a speech during the program.

Tacloban City was considered the ground zero of November 8, 2013, super typhoon, which brought storm surges up to 20 feet.

Mayor Romualdez has issued an order canceling classes and work in the city on Tuesday. In addition, several local governments, including Leyte like Palo and Tanauan, suspended classes and work on November 8.