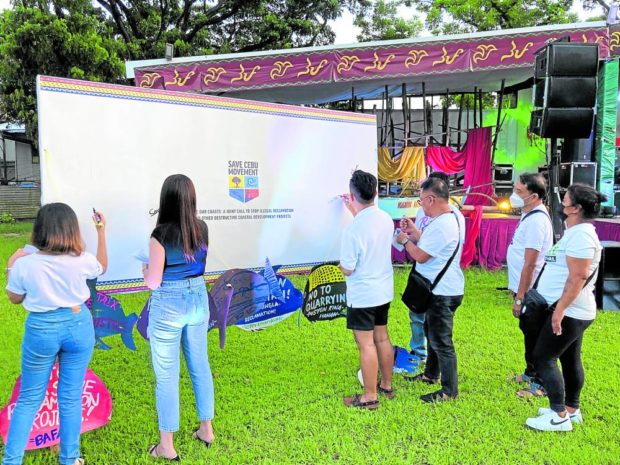 SIGN HERE People from different groups sign the manifesto against the reclamation projects in Cebu during the launching of the Save Cebu Movement at the University of the Philippines Cebu campus in Barangay Lahug, Cebu City, on Saturday. —PHOTO COURTESY OF OCEANA PHILIPPINES

CEBU CITY—Environmental advocates and civil society organizations in Cebu have launched a coalition against reclamation projects that destroy marine life and coastal resources on the island.

The Save Cebu Movement (SCM) was formally rolled out at the University of the Philippines Cebu on Saturday by Oceana Philippines together with Philippine Earth Justice Center, fisherfolk, urban poor, business groups, faith-based organizations and lawyers, among others.

The coalition would focus on mounting a strong lobby before policymakers, saying it was time for these entities to “mend their distorted priorities.”

“People in power promote these projects as the cure to our country’s economic ills. They promise jobs, secure future, growth, and development without even calculating the impact it brings to the marine ecosystem, and to people’s food and nutritional security,” read the coalition’s manifesto.

It added: “It is high time to listen to science and to the voices on the ground. Time to uphold the rule of law. Stop these reclamation projects to minimize massive quarry activities that carve our mountains, and decrease the need for more fossil-based energy sources that emit greenhouse gases.”

Citing a report from the Philippine Reclamation Authority, SCM said 10 of the 50 applied, approved or existing reclamation projects in the country are located in Cebu, making the island the “ground zero” of the massive dump-and-fill projects at various stages of development.

This placed Cebuanos in grave danger, including its marine and fishing resources that provide food and livelihood to many people, according to the coalition.

The proposed reclamation projects in Cebu are located in the towns of Minglanilla, Consolacion and Cordova, as well as in the cities of Mandaue, Lapu-Lapu, Talisay and Naga.

SCM said these destructive projects brazenly convert coastlines into permanent land by dumping and filling materials dredged from other parts of the ocean or quarried from the mountains to build permanent structures that destroy mangroves, seagrass beds, corals and fisheries.

“The ocean is our food source, our comfort, our culture, our inspiration, and our home. But for years, humans have plundered and destroyed this critical life support system by perpetuating illegal and destructive activities [by] converting coastlines, corals, seagrasses, mangroves, and wetlands into permanent land, and allowing fossil gas facilities and incineration technologies.”

SCM said scientific studies showed that land reclamation and other coastal developments cause irreversible environmental degradation, destroy fish habitats and spawning grounds, and inflict harm on the coastal resources that support the livelihood of fisherfolk.

“The issue about reclamation projects is critical. That is why we need to have a unified voice against it. We need to be more solid. What will happen to future generations if we destroy the coasts? We need to be empowered,” she said.

“I hope the government will listen to the voice of residents who were directly affected by reclamation projects. If local governments won’t do what they are required of, then we can make them accountable,” she added.

SCM instead encouraged the government to effectively implement the amended Fisheries Code of the Philippines that protects fishing grounds and the municipal waters.

“We call for full transparency of government projects and meaningful consultations for protecting our coasts. These destructive projects are incompatible with the people’s fundamental right to a healthful ecology, a right which carries with it the correlative duty not to impair the environment,” it said. INQ