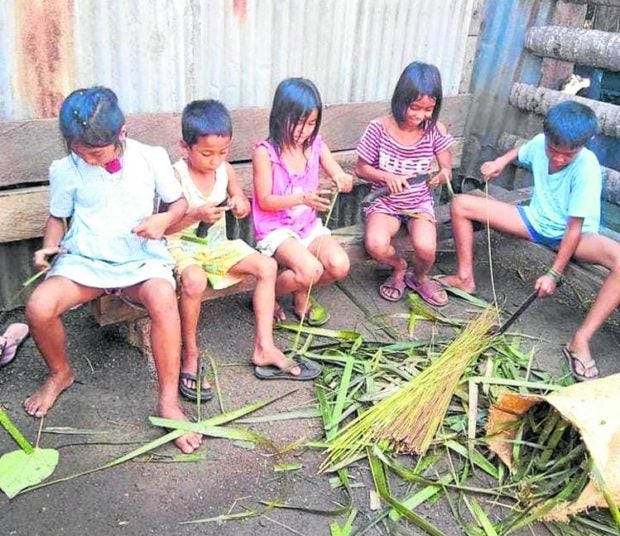 CLEANUP AIDES Children in Basilan chat with each other while making brooms that they exchanged for school supplies in this photo taken in the aftermath of Severe Tropical Storm “Paeng” (international name: Nalgae) that hit on Oct. 27. The brooms are brought to Zamboanga City for distribution to flood-hit families to aid in the cleanup of their homes. —PHOTO FROM SAVE THE CHILDREN OF WAR IN BASILAN

ZAMBOANGA CITY—Children in at least three towns of Basilan province have made broomsticks, not only to clean the debris left behind by Severe Tropical Storm “Paeng” (international name: Nalgae) but also to earn and help survivors in Zamboanga City that were still reeling from flood-related devastation.

Dr. Arlyn Jawad Jumao-as, president of Save the Children of War in Basilan, said children in the towns of Mohammad Ajul, Al-Barka and Ungkaya Pukan in Basilan had found ways to make money and help at the same time the families displaced by Paeng in the neighboring city of Zamboanga from across the sea, which experienced its worst flood in recent memory due to heavy rains spawned by the storm on Oct. 27.

Gathering the branches of coconut trees that were felled for lumber in their localities, the children put them to good use by chopping off the leaves, removing the soft, green blades, collecting the midrib part of the leaflets and turning them into broomsticks, locally known as “walis tingting.”

“In the aftermath of Severe Tropical Storm Paeng which devastated many people in Zamboanga City, to give back for prior generosity, these children produced more than 2,000 brooms and distributed them to those who needed them most. We hope that these children’s modest donations can [help] the recipients [clean up the debris left by the storm] and ease their return to normalcy,” Jumao-as said.

“A coco rib broom in exchange for school bags and school supplies,” Jumao-as said. “We are also happy that there are philanthropists who bought the brooms, it would mean income for the families of these children.”

The broomsticks were given for free to flood victims in Zamboanga City so they could clean up the muck and debris that inundated their homes at the height of the flooding.

She said the Walis Tingting Project was both a fundraising and value formation activity at the same time.

Jumao-as said the children who took part in the project were themselves survivors of the hostilities in Basilan.

“Some of them have lost a parent, a sibling and their homes, too,” she said. “One way to heal them is to make them appreciate how to be significant in their respective communities.”

“Scraping [coconut] leaflets is a form of healing, being with the group doing similar endeavor also helps them,” she added.

Save the Children of War in Basilan has been helping children from areas affected by armed conflicts, especially those who were hit and survived land mines and explosions, to overcome their fear and trauma through psychosocial activities, educational scholarship, educational toys and books, and medical assistance.